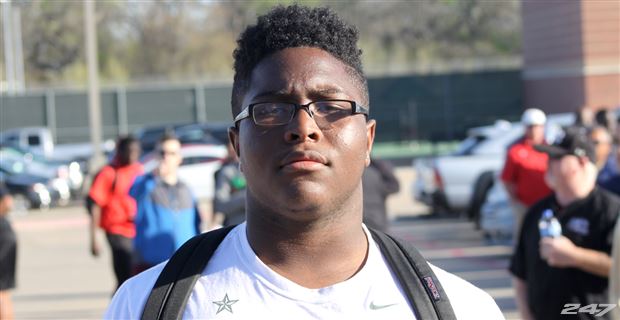 A guy who both Longhorn and Sooner fans are very interested in at the moment is Xavier Newman.  While he’s been committed to Texas since April, there has been a lot of smoke surrounding him about a possible flip to Oklahoma.  When Oklahoma came on board with the offer recently that smoke intensified to somewhat of a smolder.  So what’s going on, and who is this guy?

Xavier is listed as a Tackle, Guard and Center depending on who’s talking about him.  The reason for that probably is that when you cut on the tape, he’s playing at all the spots.  Xavier really goes somewhere between mid 6’2″ and 6″3″, so while he may be listed by some as an Offensive tackle, in my opinion he’s going to be an interior player.  With the length that Bedenbaugh has been after at offensive guard with guys like Tyrese Robinson and Marquis Hayes both pushing 6’6″, I believe he’ll wind up at center along the lines of a Jonathan Alvarez.  While may start out at a guard spot, really all three of those interior spots are somewhat interchangeable.  To that point, a guy that is going to be a center has to know all of the assignments for everybody anyway.

I wrote the other day that Bedenbaugh was really adept at getting versatile guys on campus and letting talent and competition sort itsself out.  That’s beneficial in a couple of ways because it allows him to field the best he has in terms of ability, desire and execution.  So really he’s not forced to play guys who aren’t ready because most of the guys he brings on campus can and have played in several different spots.  If they all have one thing in common however is that they’re all piss mean road graders.

Well Xavier Newman is exactly that.  Watching his film, he plays with the power of a much bigger, older player.  Something that immediately jumps out and impresses me the most is his ability to lock onto defenders, drive them off the ball and bury them.  Quite often I see a defender’s counter move being met with Newman adjusting his feet, swinging his hips to regain leverage and then finishing them off with great hands and upper body strength.  Like a lot of great prospects he’s able to generate knockdown blocks or pancakes in both pass sets and in the run game.  What was especially nice to see is that while he’s almost always in a two point stance, he doesn’t tip the play with his pad level or with the positioning of his feet pre-snap.  So to see a guy like him, who has all of the athleticism to play tackle and the power to play guard, he then becomes to me a guy who Bedenbaugh has to get in the Crimson and Cream.

While staying with the drum I’ve been beating about versatility, having him at the center position gives you a very very powerful guy in the middle.  With Alvarez being a Senior in 2017, and Dalton most likely getting a hardship for the torn ACL he suffered last spring, you’ll have Dalton probably being the guy in 2018 with a young talented guy like Newman pushing him after a redshirt year.  As he puts on weight, he’ll end up north of 300 and really fit the Bill, no pun intended, of the kind of guy that Bedenbaugh likes to have.