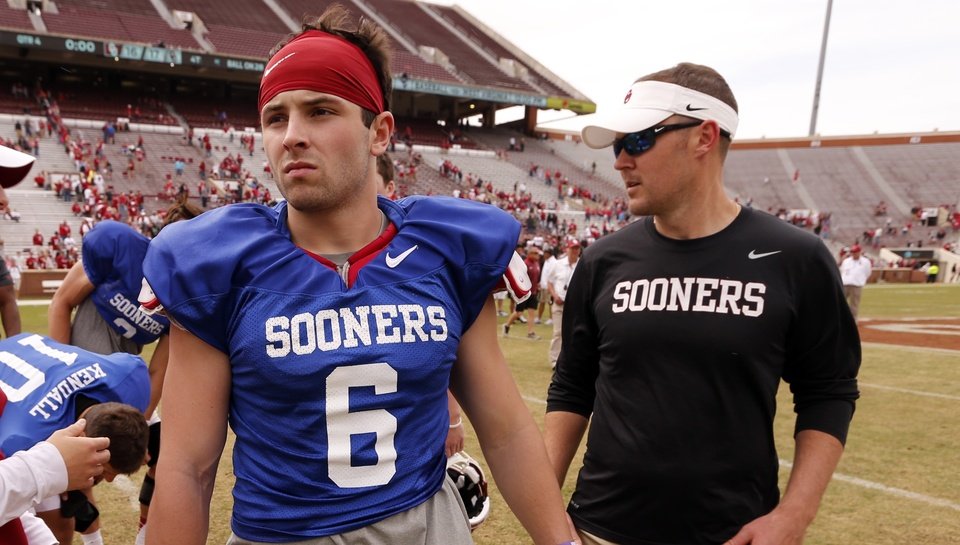 In the Tuesday installment of ‘Then vs. Now’ we took a look at the heart of the offense, the offensive line. Today let’s look the trigger position on the field, the quarterback.

The Battle is Over

Last year, fall camp was all about the quarterback battle. Baker Mayfield won and his performance on the field clearly validated what the coaches saw in him. However, now Mayfield is the only guy still left standing from said battle after Trevor Knight’s transfer and Cody Thomas getting drafted by the LA Dodgers. So with regards to 2016, there is no battle of which to speak.

Mayfield is an unquestioned team leader and in no jeopardy whatsoever of losing his job, not exactly breaking news there I know. He could throw three straight INTs on the first three drives of the Houston game and will still be the quarterback running out there for that fourth series.

And while that would definitely be less than ideal in terms of a start to the game, that particular hypothetical is one of the reasons I expect Mayfield will be better this year as compared to last.

It’s hard to imagine Baker being anything but a better quarterback this upcoming season.

But….there’s always a “but.” Is Baker a championship level quarterback?

In the past, when the Sooners have struggled in the pass game, Bob Stoops was typically the first person to step up and defend the quarterback. We’ve heard ‘the wide receivers aren’t winning on the outside’ or ‘the inside guys aren’t running the right routes’ or even ‘the offensive line didn’t do their job.’ Point being with Stoops, and really any coach, it’s never about just one guy.

With a pair of new tackles last year and an interior line that was up-and-down at times, Mayfield found himself making plays on the run quite a bit. Granted, he did so arguably as well as any QB in the country. But in the end even he didn’t have enough magic to out-charm that Clemson defense. Meanwhile, Alabama beat that same Clemson team and won a national championship with another “decent” quarterback, who just so happened to be surrounded by elite talent.

I firmly believe Mayfield can get the Sooners to the promise land. His ability to make plays with his feet and extend plays will even allow him to mask some of the possible deficiencies around him, a common characteristic of great quarterbacks. But ultimately the inquiry regarding his ability to win No. 8 for the Sooners is going to come down to his offensive line and the receivers’ ability to win individual match-ups.

Prediction: No surprise here (though the Landry Jones regression wasn’t that long ago), I believe Mayfield is even better in his second year.

The second inquiry regarding the success of this position is of course OU’s backup quarterback. Last year, Oklahoma was one play away from missing out on a playoff berth. Steven Parker’s game-saving pass deflection prevented TCU from scoring a go-ahead two point conversion that would have effectively killed OU’s CFP chances.

But what got the Sooners into that situation in the first place? A Mayfield concussion — albeit one he couldn’t possibly have prevented/avoided — forced Trevor Knight to come off the bench and take the reigns.

Knight came in and went 5-of-16 (a completion percentage of just 31%), with 0 TDs and one ugly interception. Hindsight being what it is, there is a pretty easy argument to be made had Mayfield gone out any earlier than he did OU probably loses that game. The take away being your backup quarterback could be the difference between having a chance at the playoff and/or national championship versus missing out on both altogether.

But at the same time, few teams in CFB would be well-equipped to replace someone on the level of a Baker Mayfield. You think Clemson is still a national title contender if Deshaun Watson is out for an extended period of time? Um, no. And you need look no further than our own backyard and Knight transferring to Texas A&M — in terms of the current CFB landscape when it comes to the QB position. If guys are playing, they don’t typically stick around long.

Which brings us to true freshman Austin Kendall, Oklahoma’s QB2. And the question becomes, should OU need a second half performance to “hold on” to a win this year, like they did against TCU, are they better or worse off than they were with someone like Knight.

At this point there is so little evidence available with which to project what Oklahoma has in Kendall. But sometimes it’s not about asking how good someone is. Perhaps in this case it’s more about asking how bad can they be?

Do I believe, even against a TCU defense, an early enrollee true freshman under Riley’s tutelage for several months now would go 31%?

Prediction: Oklahoma’s back-up quarterback situation is improved. If Mayfield is out for any significant period of time, OU is screwed regardless. If it’s more of a “game manager” type of situation, worst case you lean on your two all-world RBs to grind out the game and hope for the best.