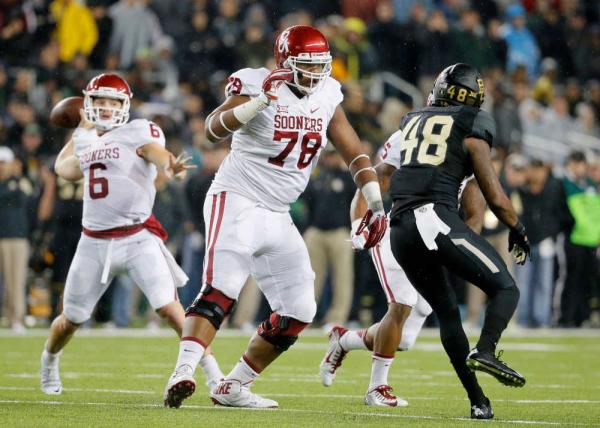 As we approach this upcoming season, I’m going to discuss each position group and offer some thoughts on how it compares to last year’s group. Let’s start in the trenches on the offensive side of the ball.

Last year the Sooners were breaking in two new edge protectors. At right tackle, Josiah St. John eventually lost his starting spot to true freshman, Dru Samia. Meanwhile on the left side, redshirt freshman Orlando Brown won the job early on and held it throughout the season. Not surprisingly both Brown and Samia had their ups and downs during the course of the season, but both also unquestionably improved as things continued to progress.

To be candid, after watching Brown get out-athleted over and and over again by edge rushers early in the season, I started to think that no amount of time or experience was going to resolve the issue. However, I can admit now I was wrong. He certainly struggled at times, but improved overall on his ability to get out of his stance and pick up that pressure off the edge.

This year Brown and Samia have a full year of experience under the belts and an entire offseason to get bigger and stronger. That said, this OU offense will also face some new pass rushing challenges this year as compared to last. TCU’s defense was decimated last year, plus their incumbent edge guys are also a year older as are the guys behind them. Same is true for Texas with Naasshon Hughes & co. And Oklahoma State will have no less than three high ceiling pass-rushers in Jarrell Owens, Jordan Brailford & Trey Carter.

Prediction – Based on the talent both Brown and Samia displayed last season as first-year starters and now with that experience, I expect Oklahoma should be better at both offensive tackle spots in 2016.

The Sooners still have one of last year’s starting guards in Jonathan Alvarez, but they are also replacing two former starters in Nila Kasitati and Ty Darlington. It’s easy to think Oklahoma will be better simply due to a potential upgrade in athleticism at both spots, a presumption I’ve seen many an OU fan make. But on the o-line you can be as athletic as you want, however if your leader isn’t identifying blitzes, if someone is missing a block, simply put it can all go to crap real quick. And no amount of strength or athleticism will make a lick of difference when/if your man gets through the line unimpeded, or you’re late making your way up to the next level.

We all love Cody Ford. He’s a big strong kid that roll his hips like a tidal wave and runs very well for someone his size. But he’ll also be getting his first start ever in a college game less than two weeks from now. Alvarez clearly has some experience at center but based on reports out of fall camp, the Sooners may wind up starting walk-on Erick Wren in the middle. Which would be another inexperienced guy who would have a lot on his plate as the new leader of the line…or as JY says, the tip of the spear.

If you put center aside for the moment, the biggest question mark right now seems to be at right guard. Going into camp the starter was Ben Powers, but based on what we’ve heard from practices it sounds like Alvarez or Alex Dalton will eventually get the nod there. Alvarez has experience at guard playing on the left side last year, so if Dalton is able to beat him out it would seem somewhat safe to assume the position is in good hands.

Everyone should (and probably does) know that if you MUST leak on the offensive line, it needs to be on the edge. Interior defensive pressure is the most immediate and while the Big 12 isn’t stacked with great interior defensive linemen, typically the undersized guys who move well — something there are plenty of in this conference — can create no shortage of slants, stunts, twists and all kinds of movement employed to create missed assignments. For an inexperienced interior offensive line, like the one OU could potentially be putting out there, picking up those gap exchanges can be a problem.

Prediction – No surprise, this one is a little tougher. On the one hand, I agree with the majority that OU is looking at an upgrade in terms of athleticism as compared to last year. But at the same time OU is going to face some stiff competition over the course of that first half of the season, with teams that like to move their defensive front A LOT to create pressure and confusion.

By the end of the season I see this position being better than last year. Early on, however, there’s likely to be some issues and this team’s success (or lack there of) figures to have a lot to do with (1) how big those issues are (or are not) and (2) how quickly they get resolved.