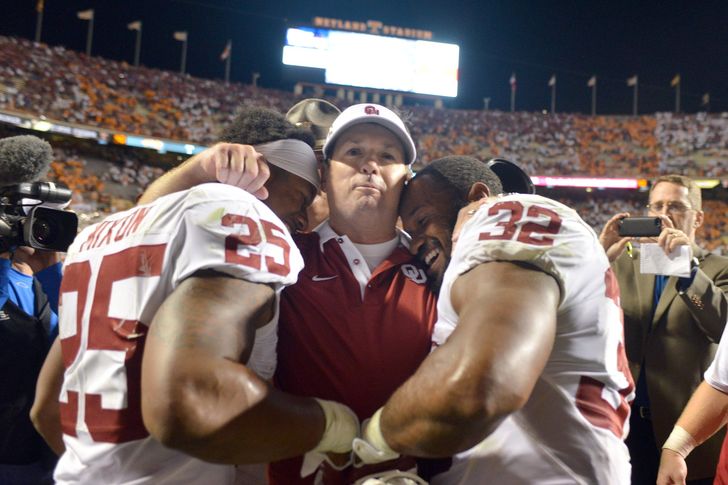 The Sooners have had small, shifty running backs. Big, downhill running backs. And everything in between. This year, however, OU returns two guys in Samaje Perine and Joe Mixon who are both a little difficult to put in a prototypical box. They’ve both demonstrated excellent downhill power and yet despite their respective size, they have both also shown great change of direction and acceleration as well.

Unless an athlete has neglected his off-season work or is coming off an injury, it’s usually safe to assume they will be better as they gain experience. While I do believe Perine has the ability to better in 2016, it’s really Mixon that I look to make a big jump coming into his second season.

In high school, Mixon was dominant to the point that it looked he was toying with the other guys on the field. Part of that was certainly the competition level, but even last year there were moments where Mixon would almost forget it was his first year on a college football field and flash that change of direction and sudden burst that simply doesn’t compute if you’re just looking at his 6’1″ 226-pound frame.

Mixon wasn’t the work-horse last year but still managed to amass over 750 yards rushing on just 113 carries (or 6.7 yards per). Add to that his over 350 receiving yards and in his first year on the field, simple addition will tell you Mixon eclipsed 1k mark in all-purpose yards….as a freshman

Prediction – Perine continues to improve but the real ‘leap’ comes from Mixon, both on the ground and through the air.

But, the Offensive Line…

…Has to do their job. Even Adrian Peterson can’t run through brick walls (although, even I’m not entirely sure I believe that). This offensive line is going to have the ability to move guys off the ball in a way last year’s group could not. And while they should (and will) be more athletic than the last year’s group, it won’t matter if they aren’t able to locate their targets and get their hands on them.

This was an issue for portions of the year last year and the results for the running backs demonstrate it. Just pull up the game stats for both Perine and Mixon in the first half the season before the offensive line started clicking. Outside of the Tulsa game, neither back hits the hundred yard mark until half way through the season.

…Stick with the run game. Which, to his credit, he did a pretty good job of not abandoning the run game last year. In fact, the Tennessee game was a perfect example of why you keep running the ball even when you may not initially have success moving the ball on the ground. Those body blows to the Vols’ defenders really paid off late in the game. Still though, at times the Sooners did go away from the running game early, often to their detriment.

Oklahoma fans have to hope the offensive line clicks early, signed Captain Obvious. But when you have teams giving you all kinds of gap exchanges and you have a new interior line, that isn’t always going to happen right away. The backs need opportunities to get a rhythm but the offensive line, a unit comprised of five individuals charged with doing their job so well that they operate as one, need time as well.

Towards the end of that Clemson game last season, I started to wonder if OU would have to go five-wide just because of how beaten up their backs had been throughout the game. As big and strong as both Mixon and Perine are, even they can only take so much punishment. And if the ‘hammers’ don’t get you, the twists and turns can.

Which is why Oklahoma losing Rodney Anderson for a second straight year is a tough blow. I don’t doubt that they can have Abdul Adams ready when needed, but Anderson was a guy with at least some experience who provided a nice cushion between the two feature backs and a smaller guy like Daniel Brooks. Scholarship limitations make depth an issue for almost everyone at one point or another. And while it isn’t necessarily something to worry about now, it’s at least noteworthy that if OU were to be without either of their two top backs, they’d be rotating a 5’8″ change-of-pace back, a true freshmen and/or a walk-on.

Yes, if there was any spot on the field OU could “afford” to deal with an injury it was at RB. But even with that depth, if Perine and/or Mixon were to go down at any point things could get real in a hurry.