The Wonder of Baker Mayfield: A Stats Look Through 11 Games By: Ryan Lewis Posted on: November 21, 2017

Let’s look at some of the differences from previous years. The completion percentage is right on track with previous years, as are the touchdown and interception numbers.

One big change is in the yardage: it’s up to almost 350 more yards than last year. As a result, the YPC and YPA numbers have seen huge jumps. Last year, Baker finished the season with an 11.08 YPA line; that number was good for second all time (Michael Vick holds the record from 1999 at 11.35). His 11.60 would be a huge jump from that. There have only been three seasons with a YPA number over 11.0 – Baker could have two of the potential four if he finishes above that mark.

As shown above, Mayfield holds up very well against previous Sooner quarterbacks. (Also, Good Lord did Landry Jones throw the ball a lot). 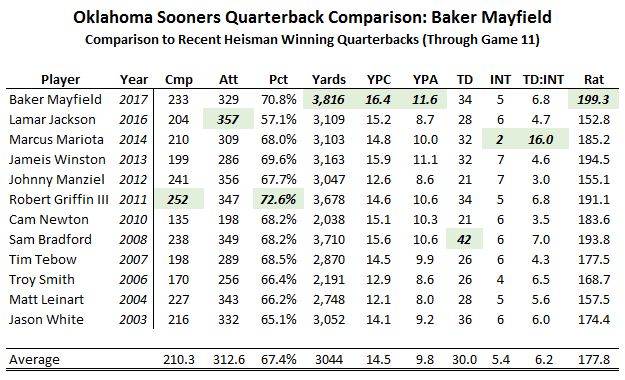 Mayfield matches up like a champ against those numbers. He doesn’t throw the ball as often as some (thank you very much to Rodney Anderson, Trey Sermon, Abdul Adams, and company for that). As such, his completions, attempts, and touchdown numbers aren’t quite as high as some of the others. When he does throw, however, his efficiency is through the roof.