The 2nd play into the game, the Wildcats scored on a 75 yard run.  Like I said in my scattershot post earlier in the week, the key to stopping an option/QB run heavy offense is assignment discipline.  In this case, Murray didn’t fill the gap directly in front of the K-state QB Delton.  He should be right off of the hip of 79 right now blowing this up. 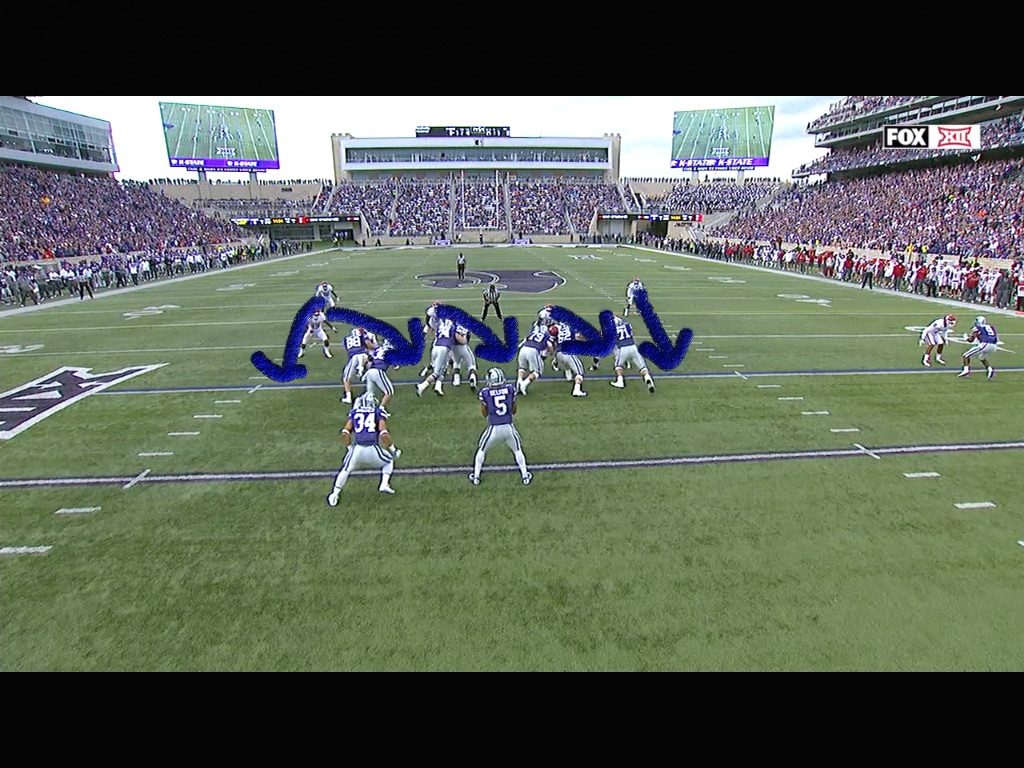 Good LB corps will look like they share the same brain.  In this case, we see Kelly (left outside) and Beal, right outside, sliding to their left as they should.  Murray is caught up in the paralysis of analysis and should be right in that A gap that has moved.  I put a blue dot on Kenneth so you could see him.  The other thing that is happening here is that Amani Bledsoe shouldn’t be getting turned like he is.  This makes the combo up to Murray very easy for the guard to execute.  Even still, Murray has to attack that gap and Bledsoe has to be more physical. 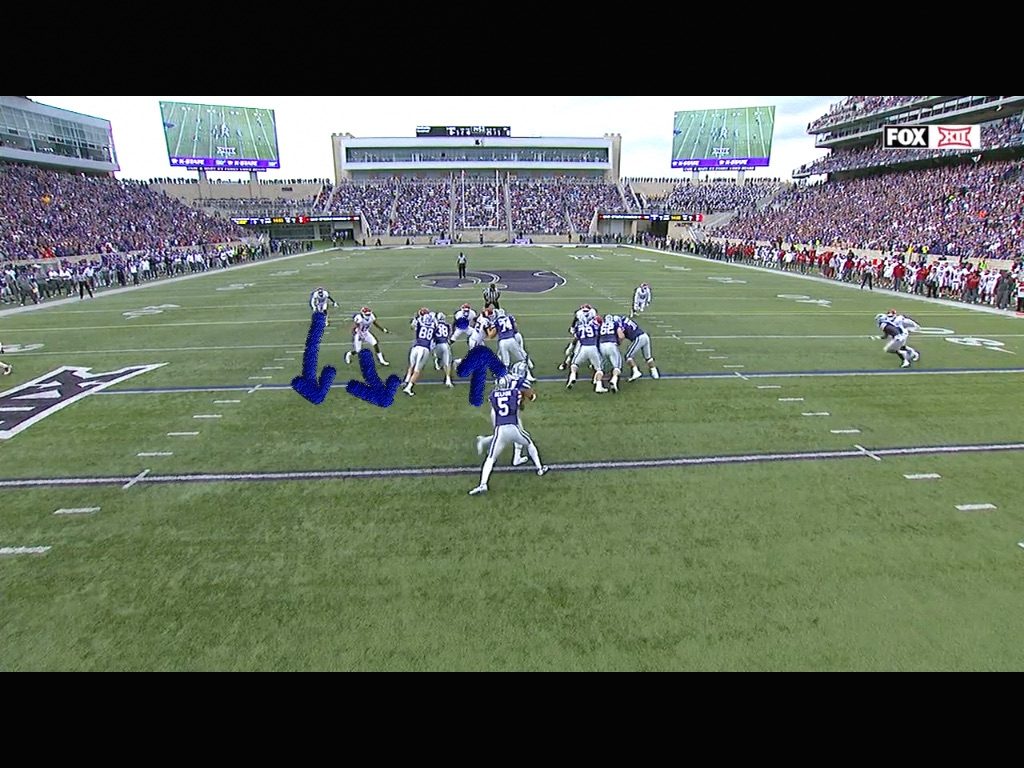 Defending the spread option is a tough task.  You can see the Sooners are gap sound to our right and backside if Delton keeps it with Kelly and Parker.  Everything’s covered if Bledsoe doesn’t get drove and Murray gets over the top of the combo. 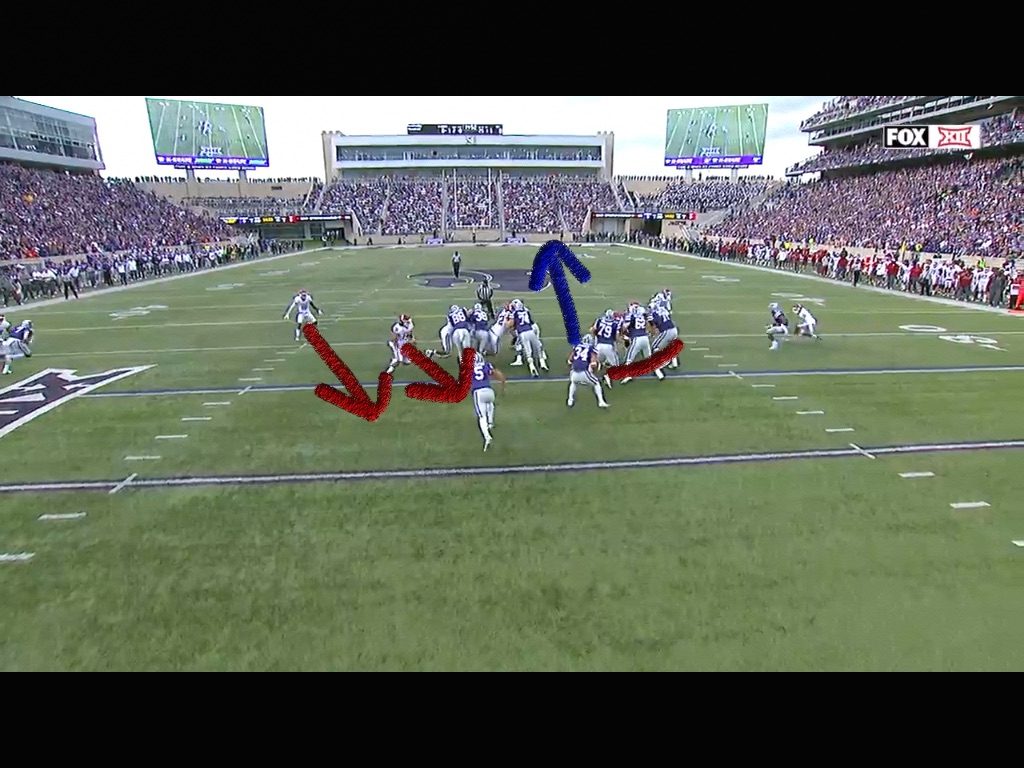 The Sooners went right down the field and answered the quick strike by K-State.  Later in the game, Oklahoma got gimmicky with the wildcat mess.  I hate those calls especially with Mayfield at QB.  With Baker back there, there’s the threat of a play like the one below.  The playbook is open.  When you motion him out and you go direct snap to whoever, it eliminates a lot to think about for the defenders.  Case in point here, the ‘Cats think they have this play bottled up.  Flowers has to sell the play action by holding the block on the end just long enough. 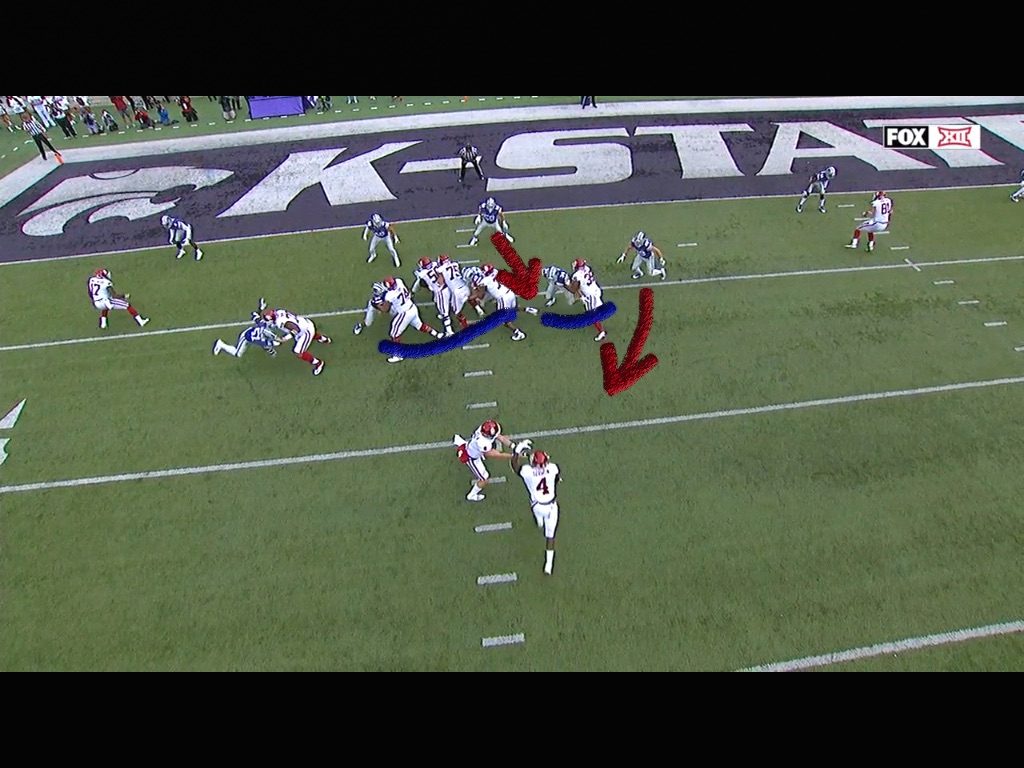 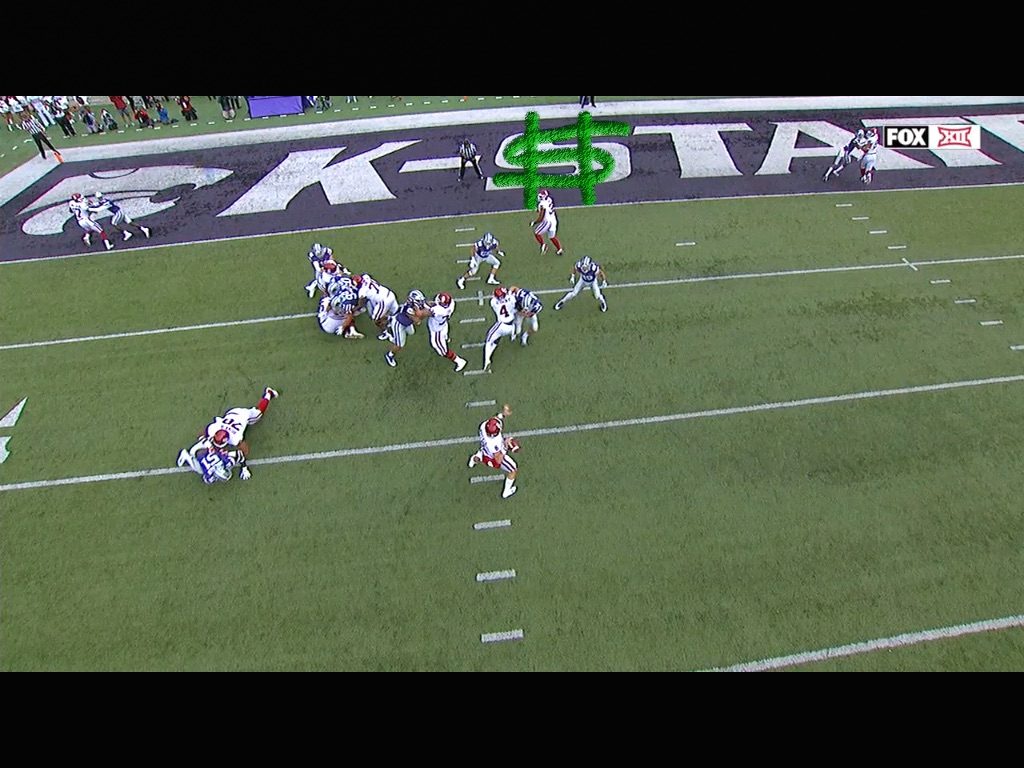 I want you to look outside at Flowers.  He does a lot of little things right.  He pushes #7 out to the left just a bit while Baker and Rodney are carrying out the read option look.  The D-End is crashing to take Anderson, so the correct read is for Mayfield to pull it. 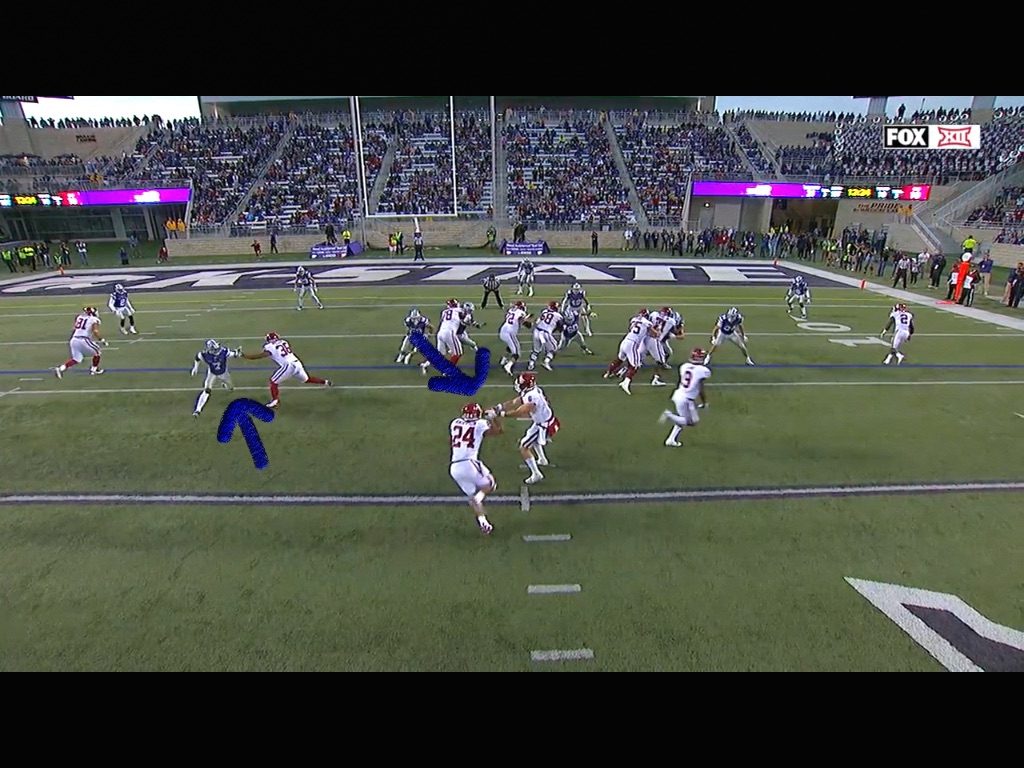 So what I said about Flowers earlier, if he doesn’t push #7 out to the left, he’s probably in where the blue line ends next to Baker.  Because he pushed him out about a yard, Baker has a chance to get up in there off of the read option keep.  Little things make or break a play. 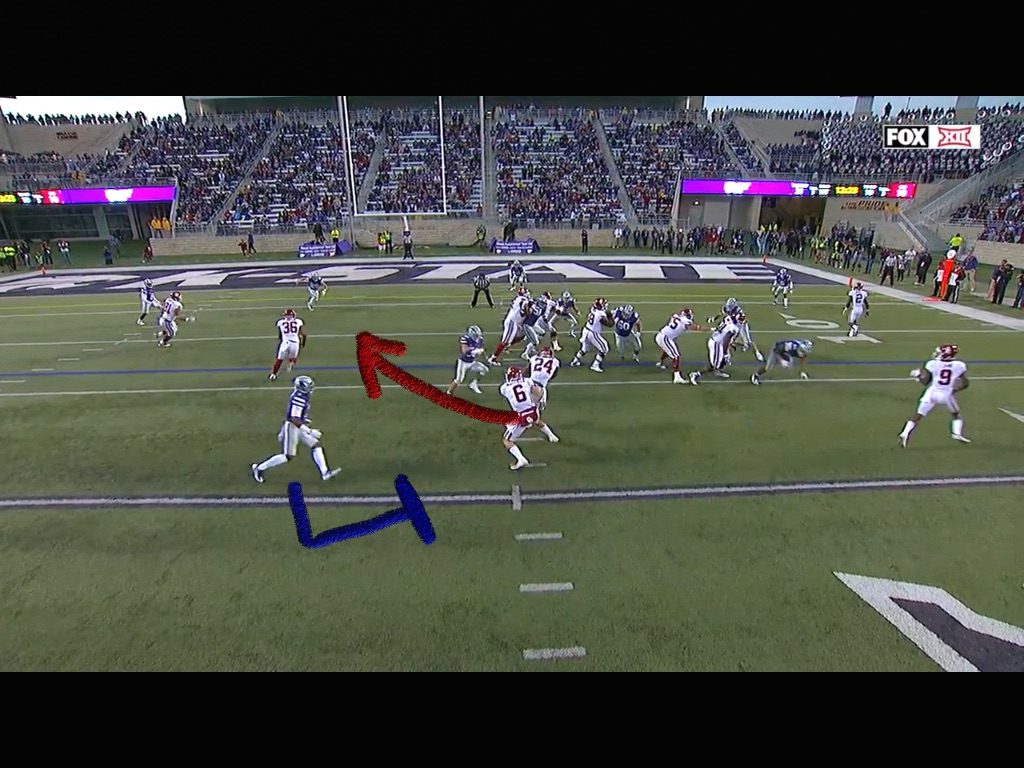 Baker sets up the safety #2 perfectly.  He fakes vertical (toward the goalpost) and dips his head inside to get the safety to commit.  Once he does, then he shoots outside to get to the pylon.  Very well executed play and heck of a run by Baker. 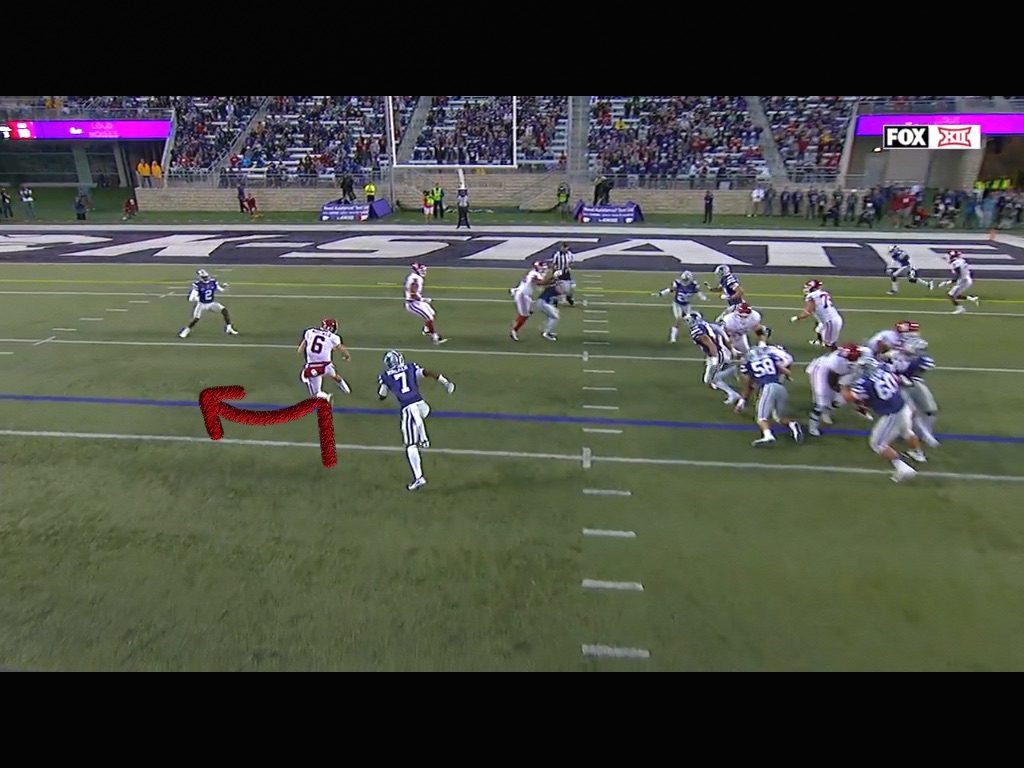 After the defense had largely shut down the K-State offense, the Sooner offense finally started to get untracked.  While this gives the look of the read option to the defense, it’s actually a lead-keep for Baker all the way.  Flowers is blocking at the blue arrow, and Anderson is going to lead up to set the edge for Mayfield. 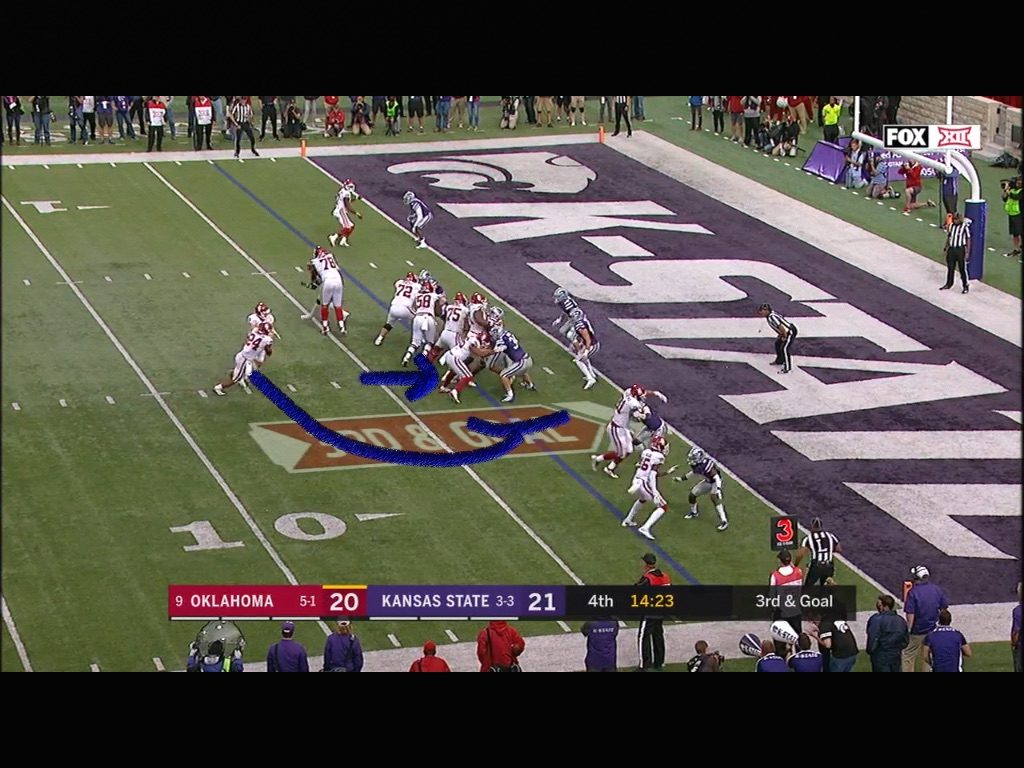 This is the goal-line play against Tennessee a couple of years ago all over.  By Rodney walling that guy off, there’s no way that the MLB #58 can get out to Mayfield.  I’d like to see better effort here by Mead at the bottom. 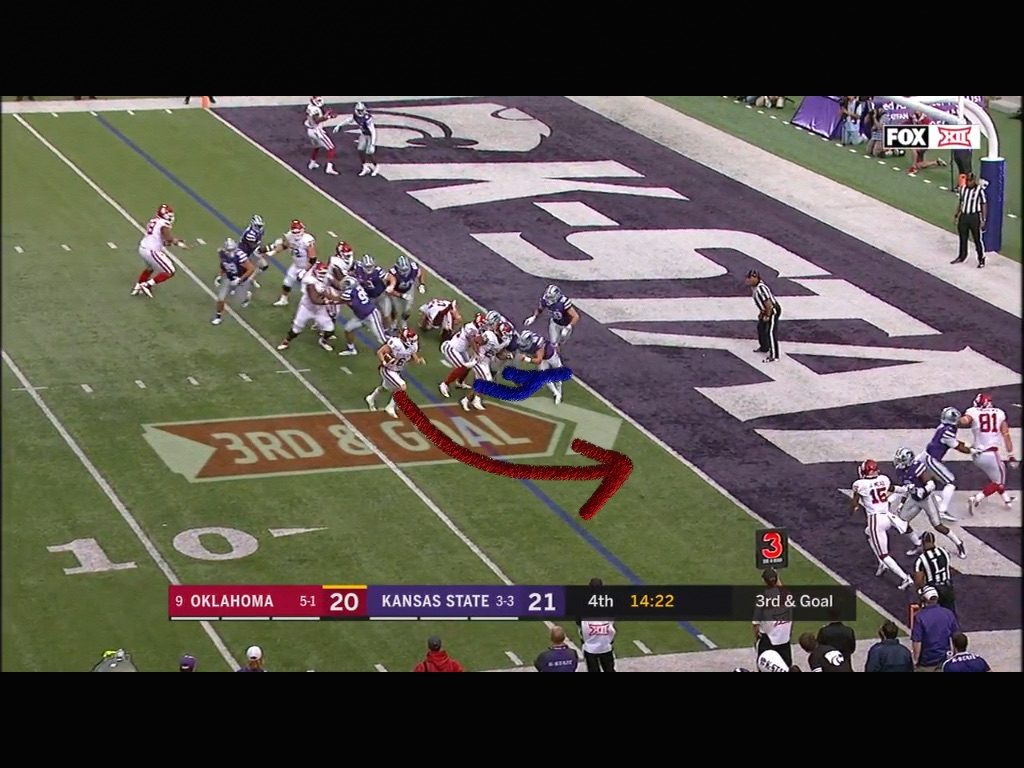 This is a perfect sequence of play calls by Riley.  After giving em QB run game, there are four defenders to the bottom, with the one on one spy looking back there at Baker.  The Wildcats are reading run all day here again, and ready to fly up and blow this play up. 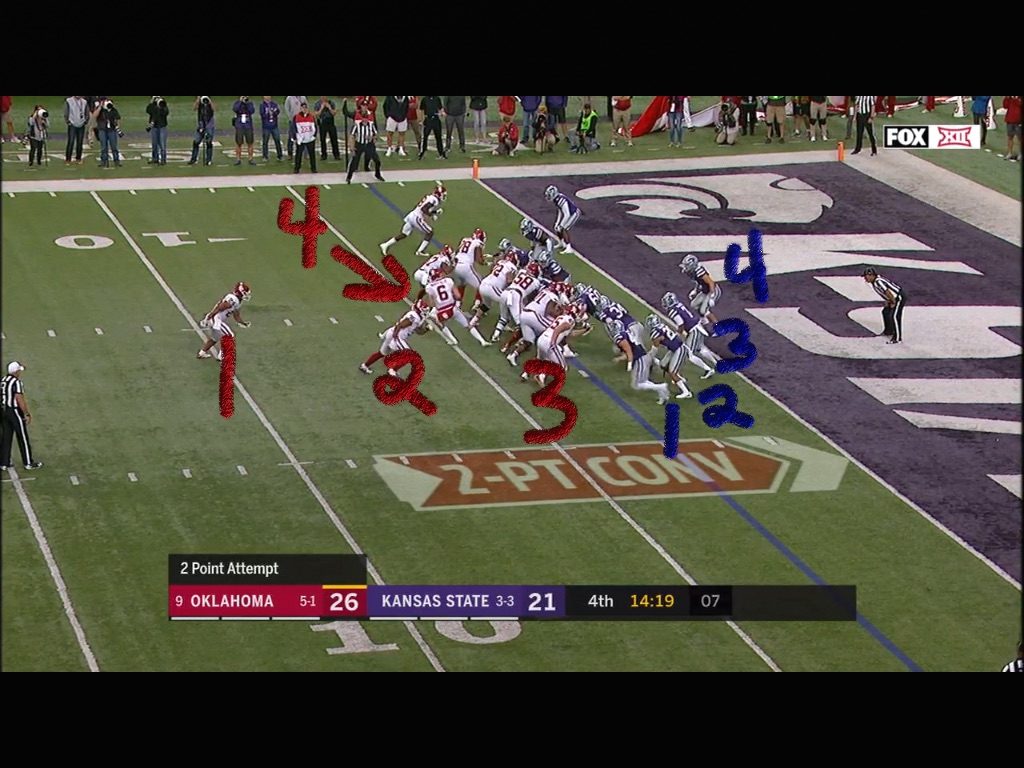 It’s a missed assignment by the defender here who has to read run as well as pass.  It’s an easy pitch and catch to put the Sooners up by 7.  Has anybody been more money than Flowers this year? 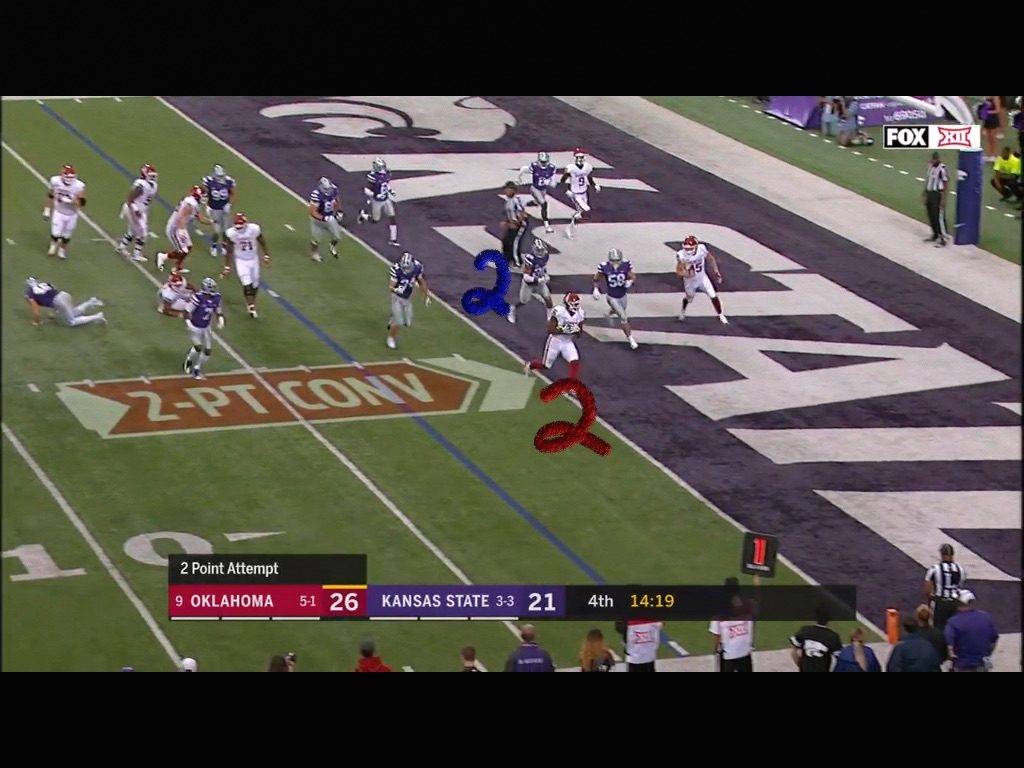 A guy who had a big game Saturday quietly was Marquise Brown.  He caught this pass and nearly housed it.  He may not be as straight line fast as Badet, but he flew this one all the way down to about the 5 yard line.  He can flat out get it. 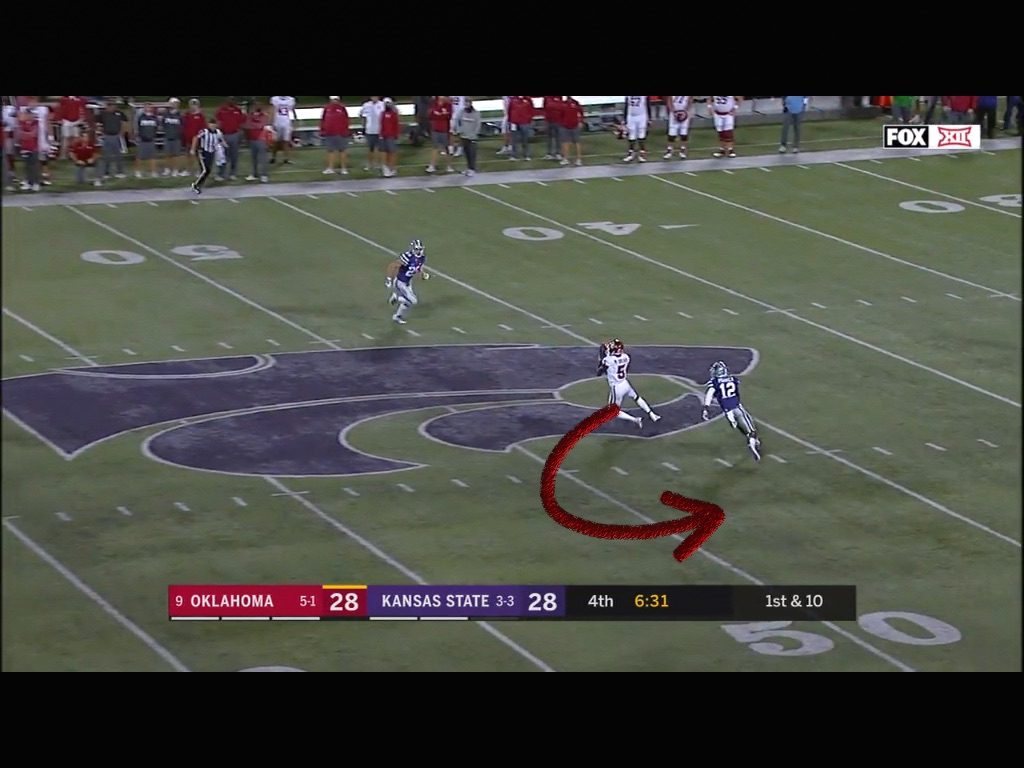 After catching the swing pass, I thought Rodney was going to lower his shoulder and try to muscle it in.  The defender coming north and south on em had inside leverage and I thought if Anderson was going to go that route he may get knocked out of bounds about the one. 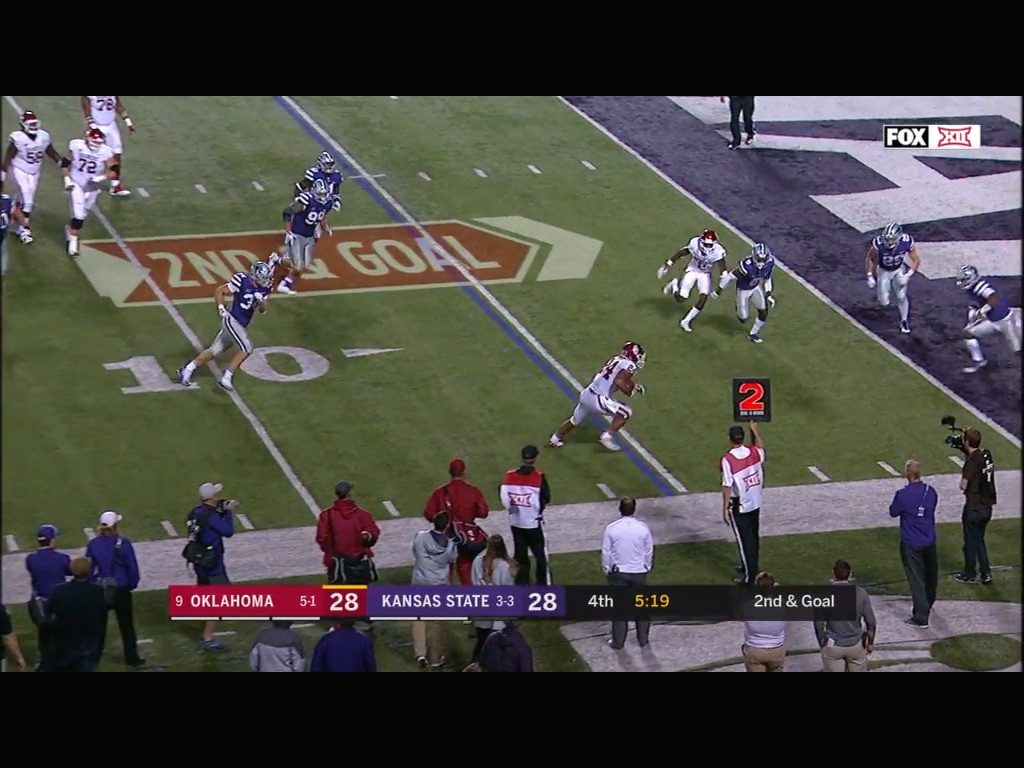 We haven’t seen OU do a lot of swing passes to the backs since Ohio State.  It really hurt the Buckeyes in that game, and Anderson surprised a lot of people when he went airborne here.  Besides Mayfield’s monster game, I’m not sure anyone had as big of a game as what Rodney did Saturday. 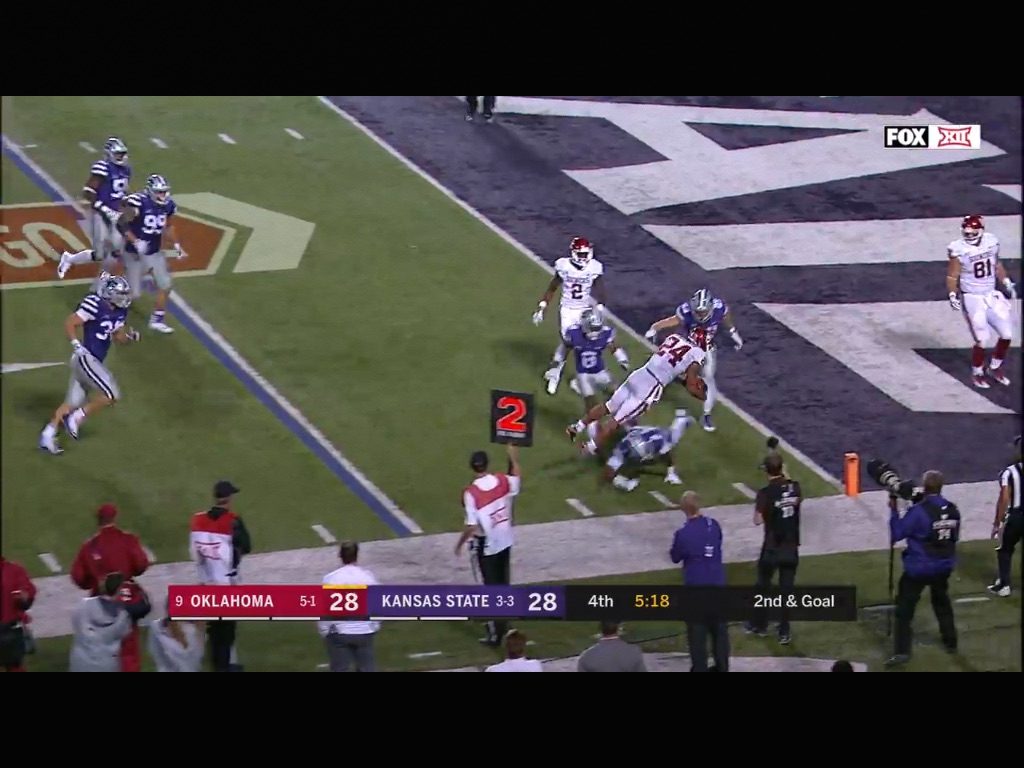 After getting the ball back, K-State chose to go deep on 1st down.  I’m not sure if the refs for the Texas game last week made the trip to Manhattan, but Lampkin is clearly getting held here.  If you zoom in on the red arrow it’s clear that the dude has Lampkin bearhugged.  Still no flag and a deep completion. 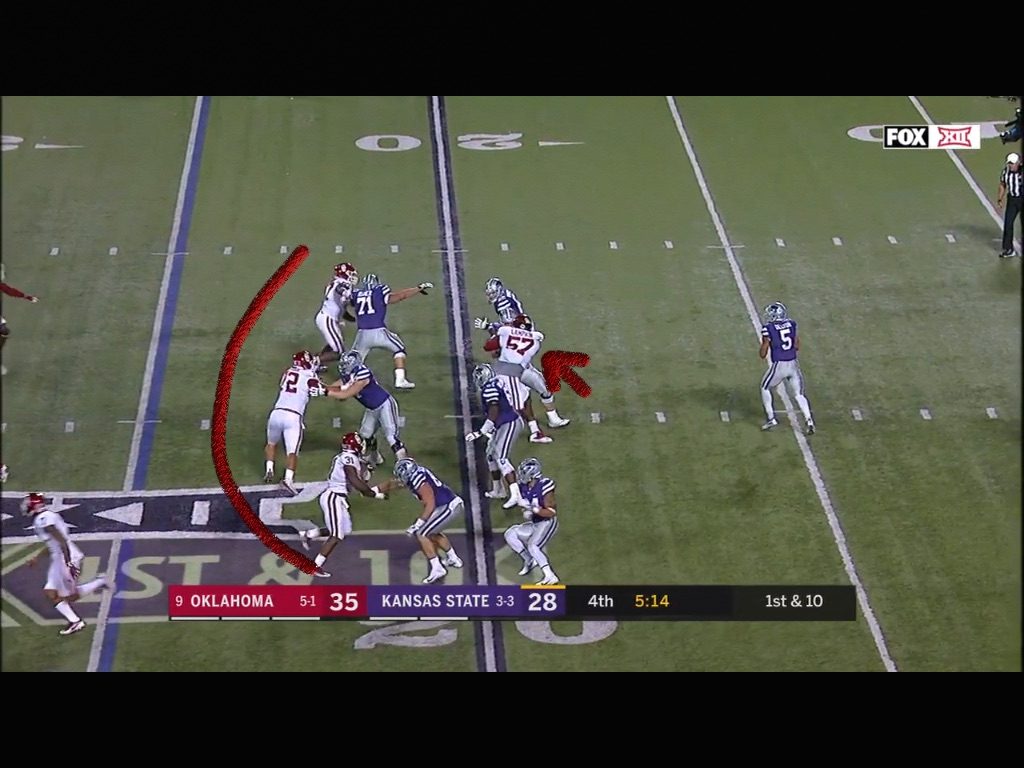 K State scored to tie it up and I remember thinking to myself that they left Baker too much time.  The Sooners faked the Jet Sweep here.  They were trying to create enough movement to have the Wildcats overcommit while running a counter up inside of it.  Problem was that K-State had a slant called, and the whole defense is flying to the top of the screen. 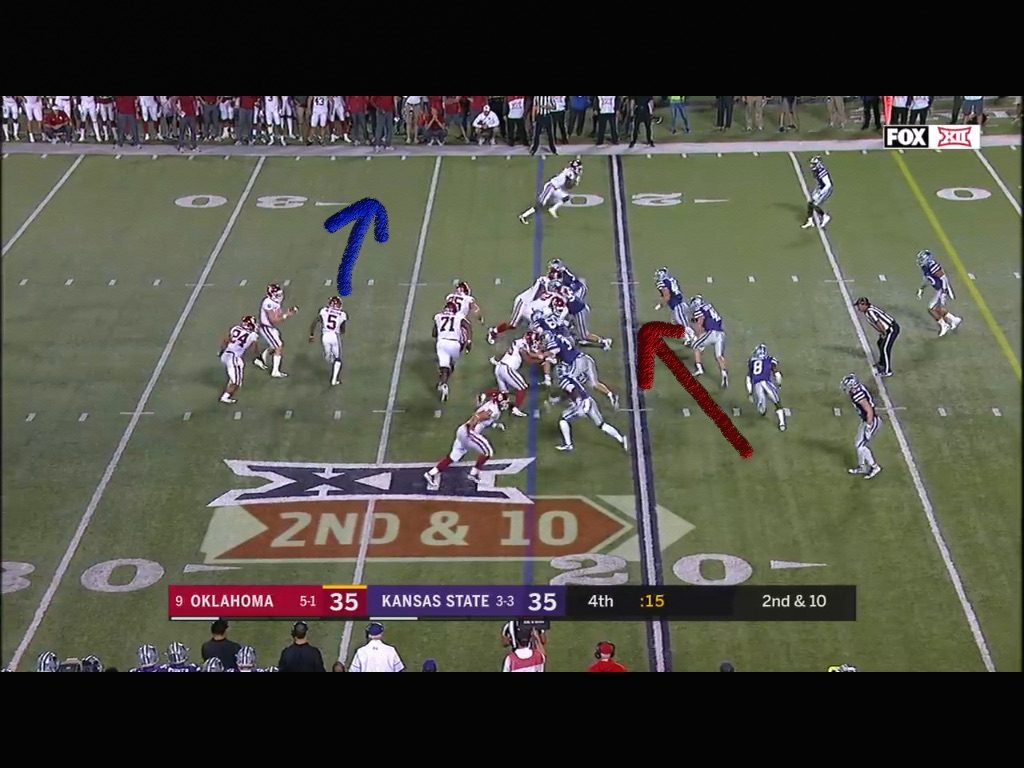 I thought this play was dead to rights, because the hole is supposed to be up in where the blue arrow is behind Evans and Samia.  You hear about WR’s in the run game being such a big part when they block well and, if it wasn’t for Lamb at the top, and Brown at the far left just playing heads up, this play goes nowhere. 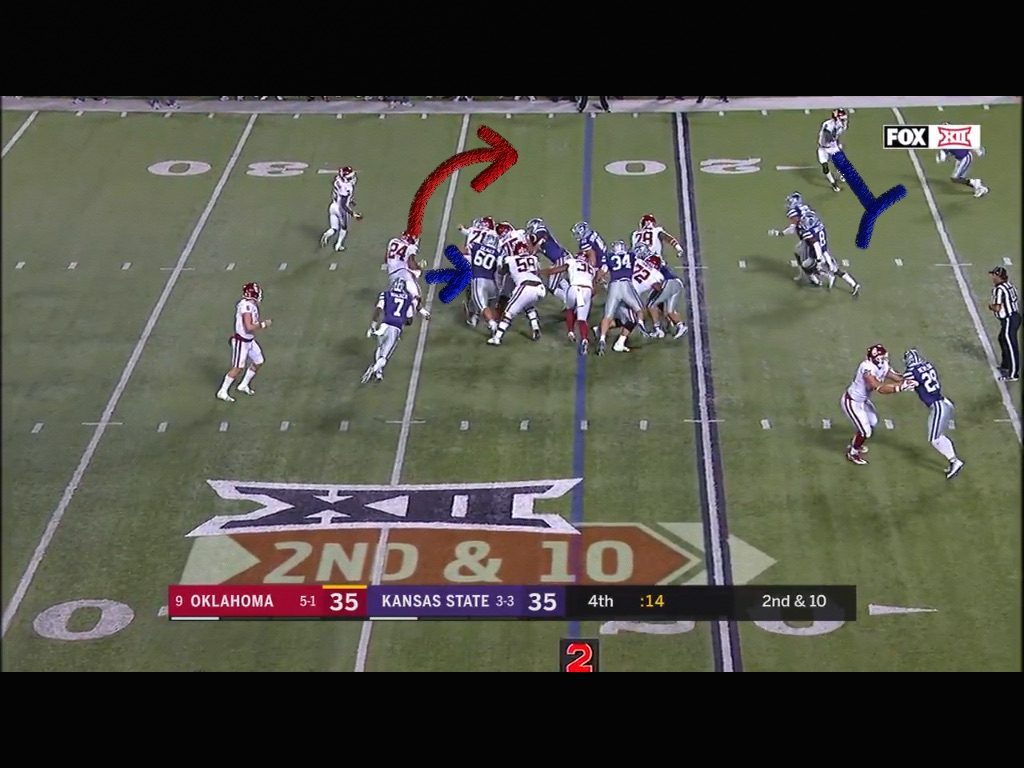 The OL got pushed way too far back, but three guys made this play happen.  1st, Rodney Anderson breaks a tackle at the far left.  CeeDee Lamb is playin’ dominoes again, because his block at top right took two guys out of the play.  Then, the smallest guy on the team may have made the biggest block of the year.  All 162 pounds of em sealed off Goolsby to the inside on the 24 yard line, and sprung Rodney for the win. 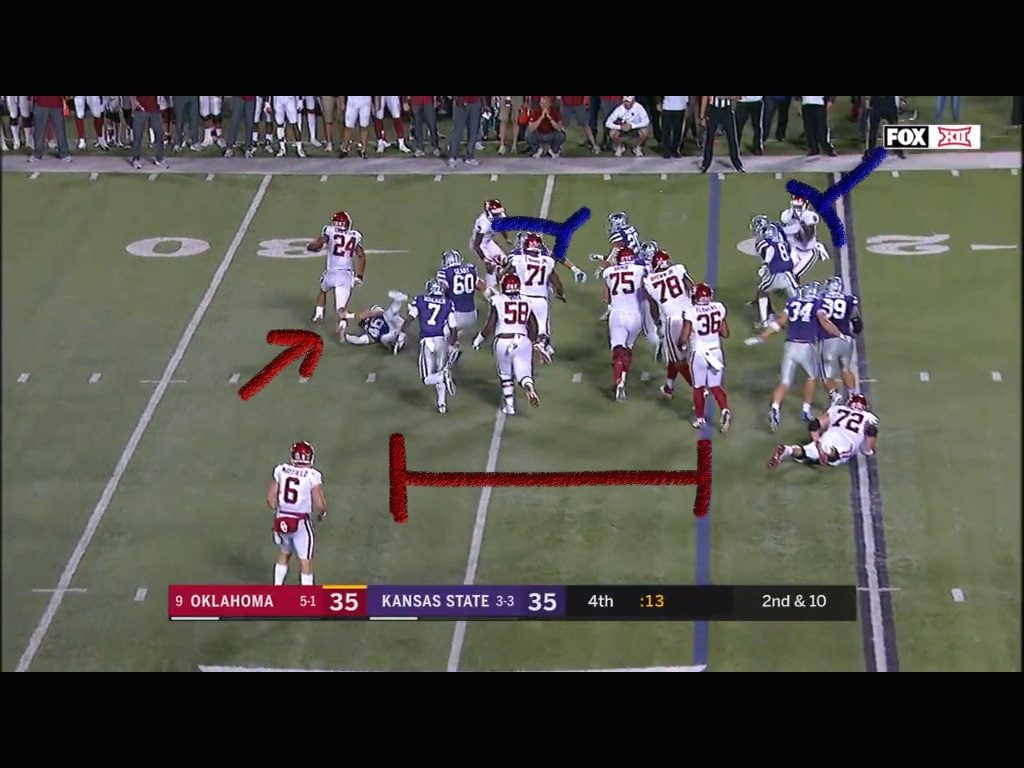 Here’s another look at it.  The two blocks took out three people, and the horizontal view doesn’t do justice to how much space Anderson actually had to the outside.  Once he got around the corner he showcased his speed and put the Sooners up for good. 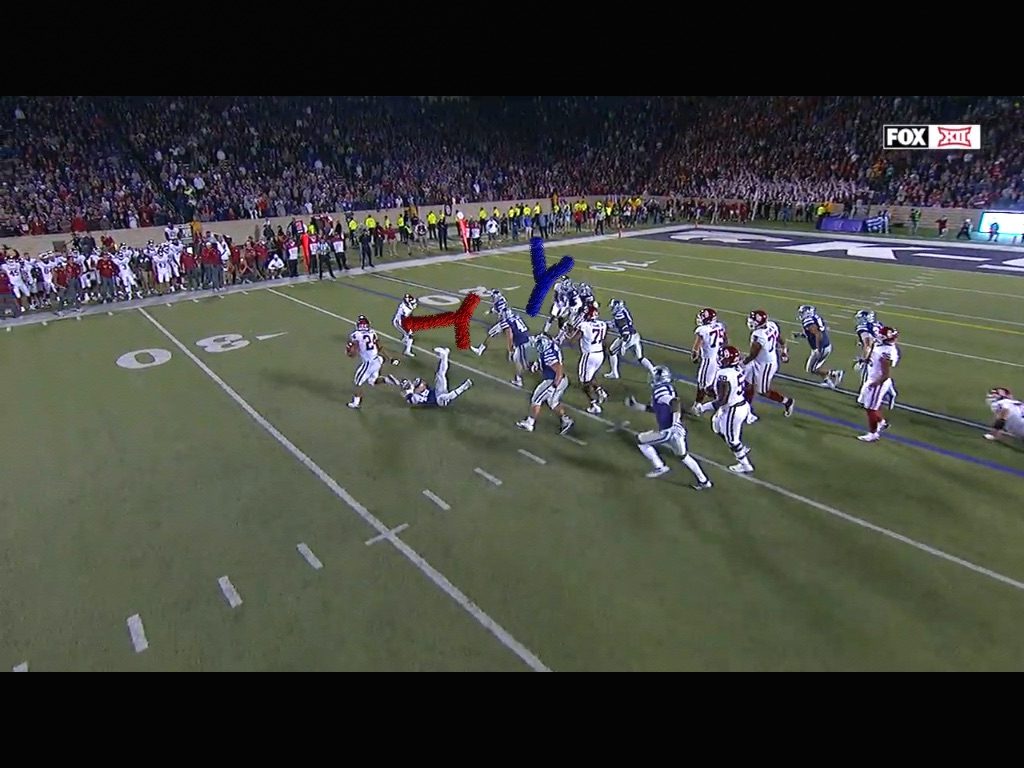 Not sure who this guy is, but he’s providing good technical advice to Rodney on which direction to run.  Ball game Sooners. 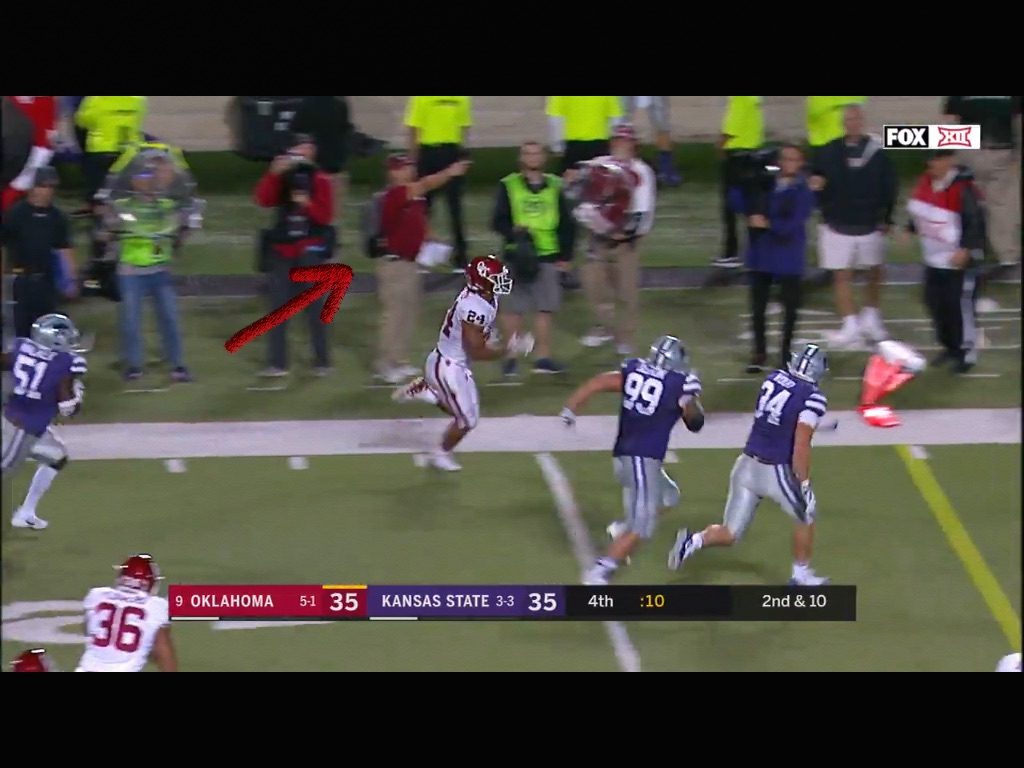