Hey all!  So glad to have Sooner Football back every weekend for the next few months.  If you’re like me, you didn’t really know what to expect coming into this.  It seems like every offseason we hear about how the team looks better, bigger, more talented etc.  I have to admit that I was very nervous about Florida Atlantic coming into Norman, especially after what we saw last year out of the defense.  Coupled with that, your best defender is rushing the passer in L.A, and some guy who won the Heisman and was the #1 pick in the draft is gone too.  Another guy who won the Big XII offensive lineman of the year two years in a row is gone too.  My experience kept telling me not to expect too much and just be happy with a win.  While I knew this team has the talent to run the table, I also know that there’s a lot of talent and production to replace.  What I was hoping to see was a team who looked well prepared and did the things they’re supposed to do.  Well, I got more than I bargained for.

The recruiting classes that the Sooners have brought in have been extremely talented.  I was especially excited to see Ronnie Perkins who won the Week one Grown Ass Man award.  While Lee Morris & Curtis Bolton made solid cases, they’ve been in the program for several years.  Ronnie is about 4 months removed from his senior prom.  Below, he’s “slow playing” the zone read, watching where the ball goes and then reacting.  If the QB keeps it he goes down inside. If the back gets it, he has to get outside. 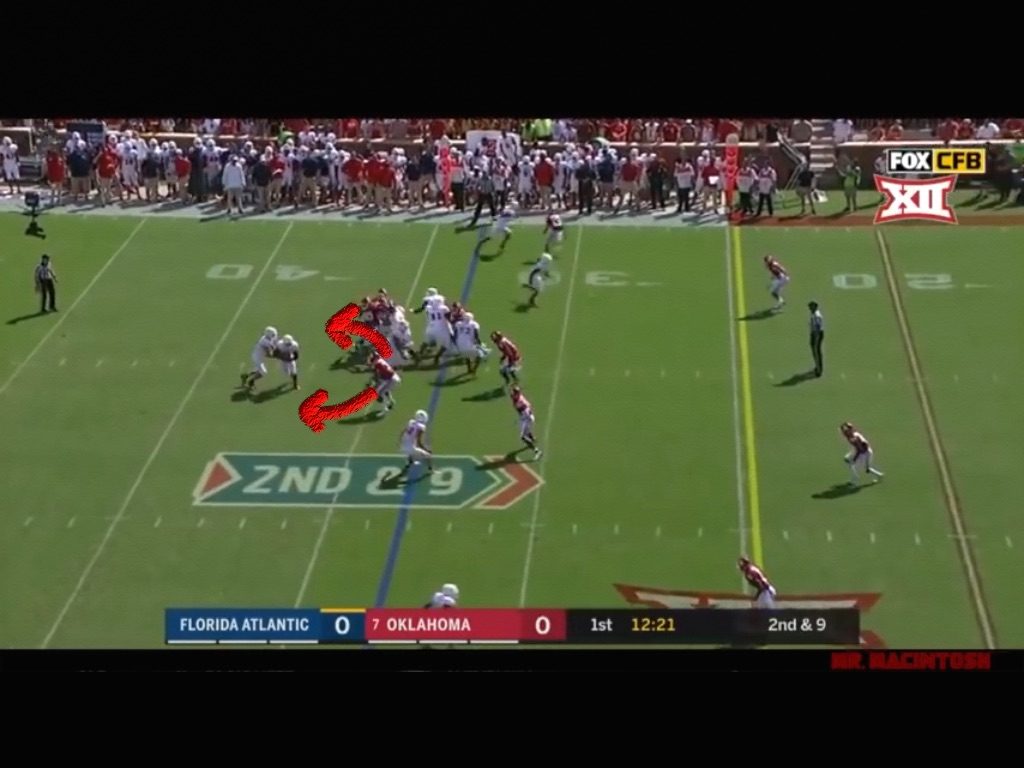 Robison kept it, and the pure athleticism this young man has is something we haven’t seen in Norman for a while at that position.  Having the ability to make this play is something that not many people can do.  The lateral quickness to handle it, and then having the confidence to slow down and then react like lightning is extremely difficult.  Still, he did it with ease.  What was also refreshing was seeing the blue arrow, Kenneth Murray doing his job. 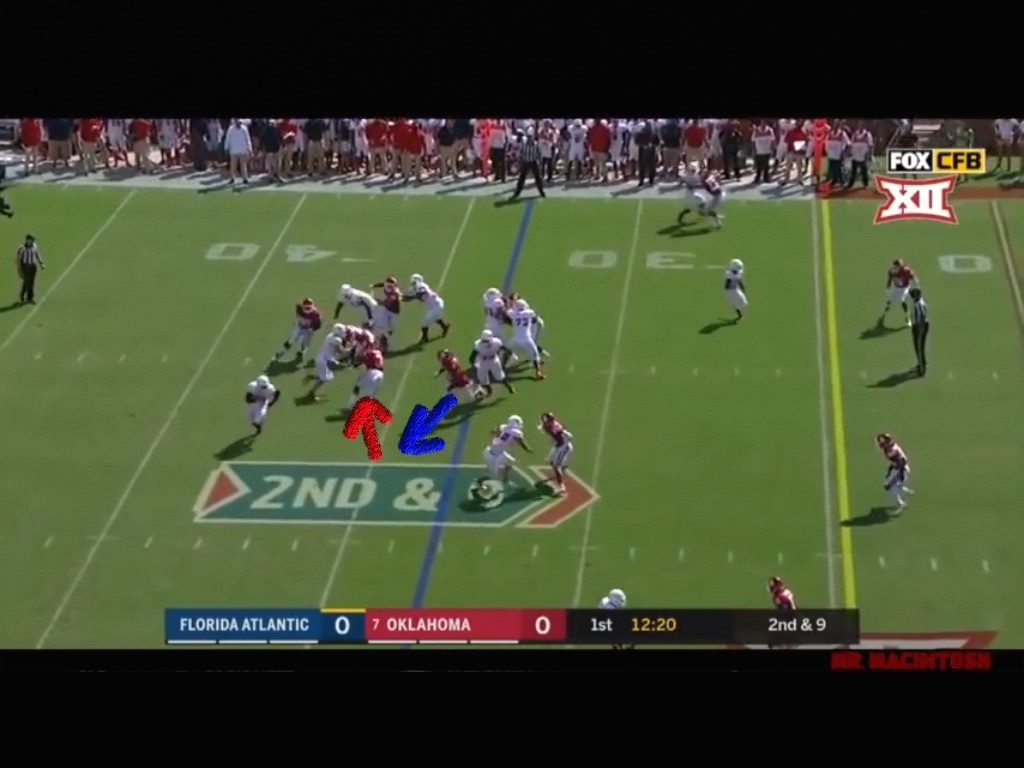 Last year we saw Murray make some great plays, and we also saw plays that made us want to throw something at the TV.  Here we see the mental development of Kenneth, and understanding that he has to maintain gap discipline.  As a middle linebacker, knowing that your safety, Bookie(back on the 40), in this case, has that outside gap, and trusting him to do his job is essential.  It is especially essential when defending the spread. 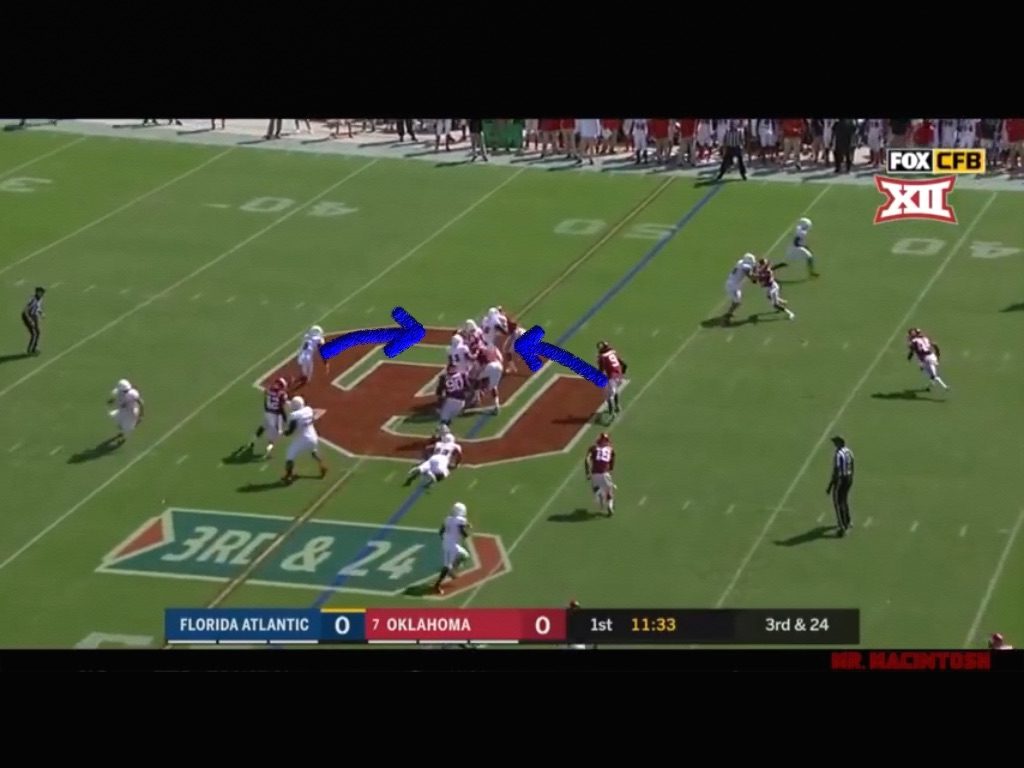 Last year we saw Murray fly out to the blue dot and overrun his gap more than once.  We also saw him try to undercut the play and come behind his D-Tackle.  Here we see him going exactly where he needed to.  He played an outstanding game Saturday, and if he maintains this level of play, it’s going to be a special year for the Sooners.  Look at both D linemen with posted up arms “squeezing the hole”.  Perkins “Grown Ass Man” is out there forcing this back inside for Murray, but ended up making the play himself. 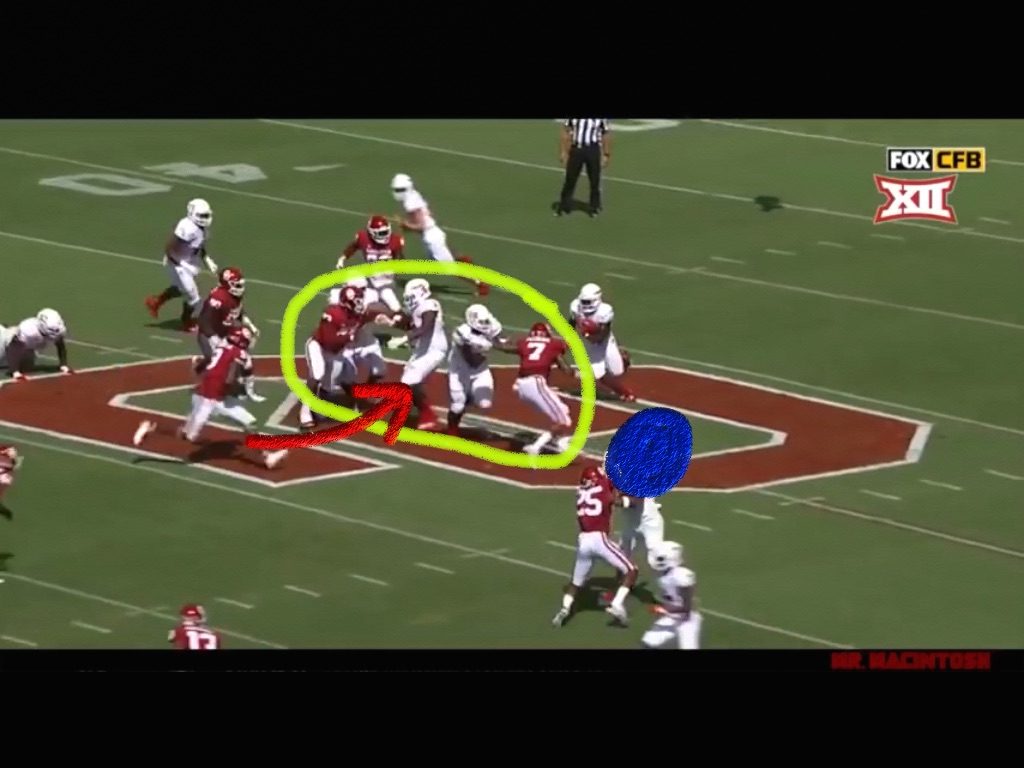 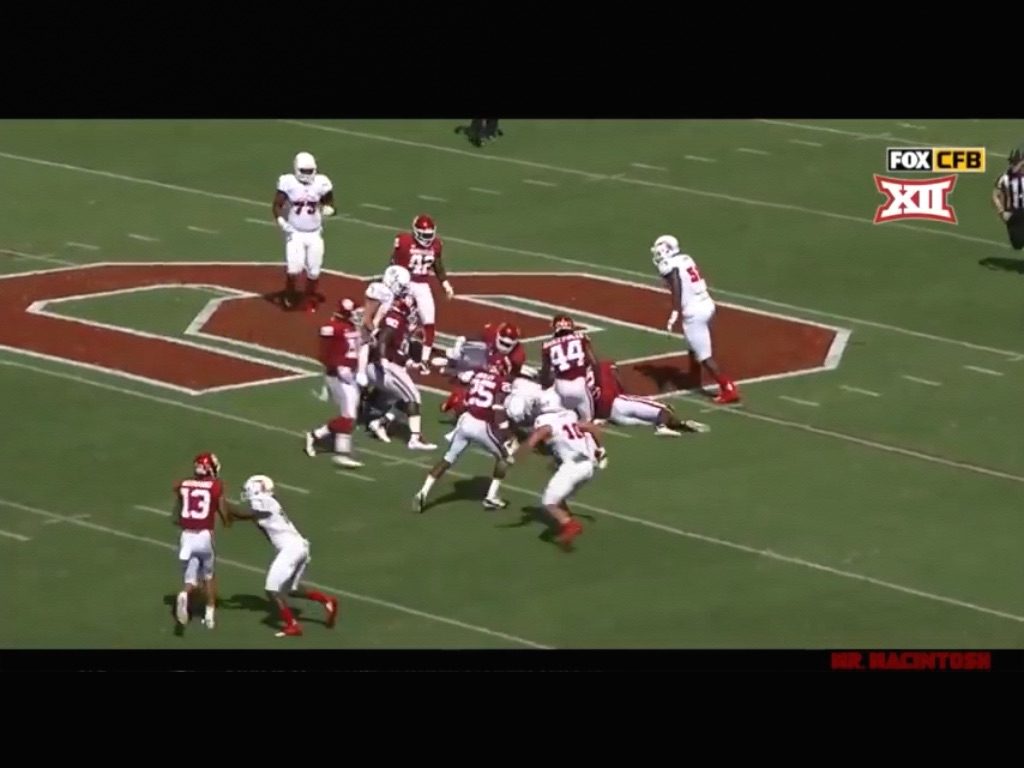 Many times last year we saw the Sooners run an off-tackle play off of this look.  The entire left side of the o line(bottom gold arrow), shows zone left while leaving the backside 3 technique unblocked.  Samia is up to the middle backer, and Cody Ford is inside out on the backside d-end. 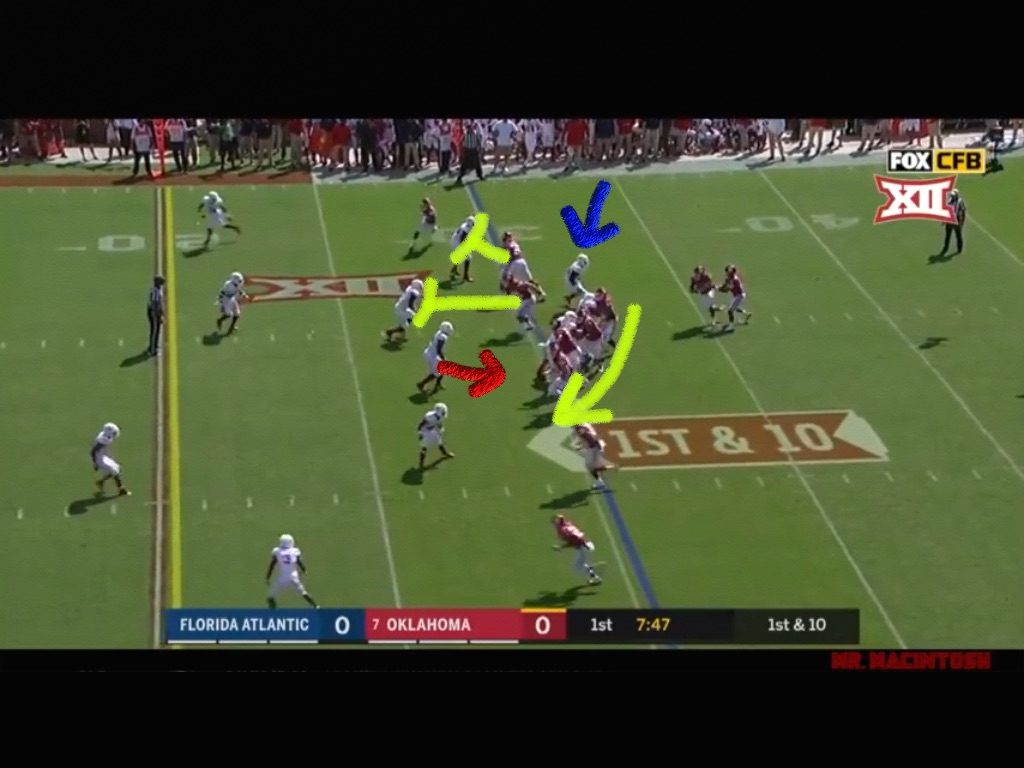 K has said it before that, Riley melts your keys with his play design.  Everyone on the defense except that backside 3 tech reads zone left and has their hips turned and are running.  For a D tackle left alone like this, you’re thinking A. I’m getting earholed on a trap, or B. Screen play.  What’s really going on is… 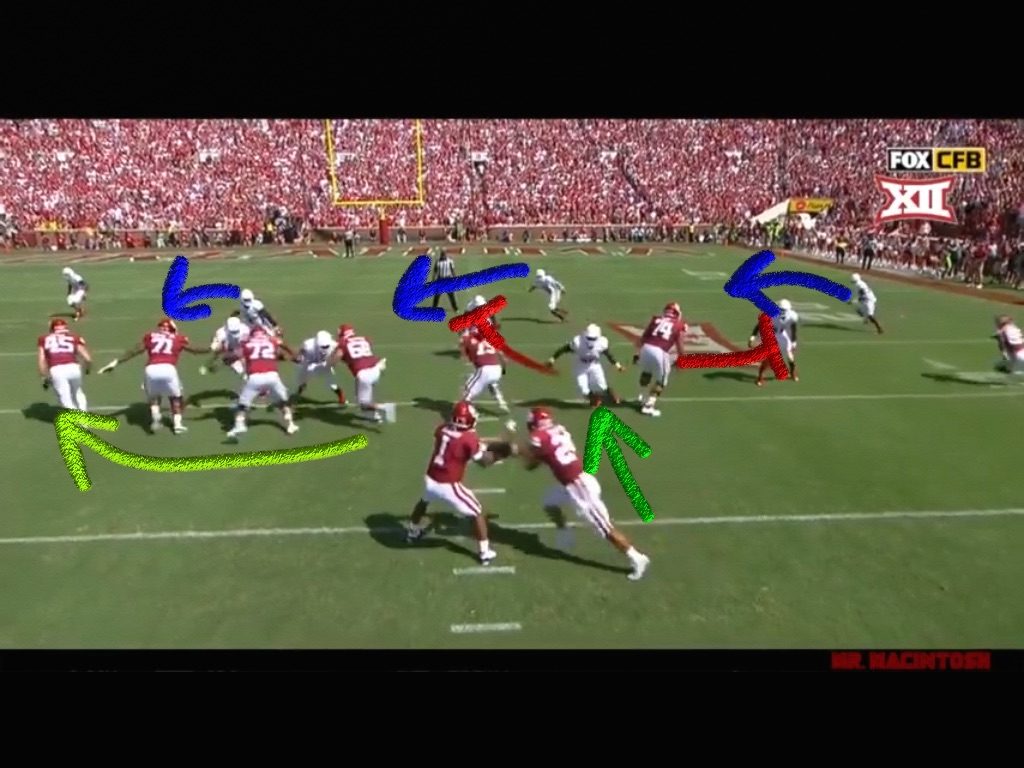 As it starts to develop, you can see Ford and Samia in good shape on their blocks, while the whole left side has reacted to the zone left look.  The 3 technique is in an awkward spot here because this is something you just don’t see a lot.  He’s flat-footed, so the give is the correct read.  If he crashes on Rodney, then Kyler pulls it here and is up in that same hole.  Jaylon Robinson is flying up to block whoever shows first out of the corner and the Safety. 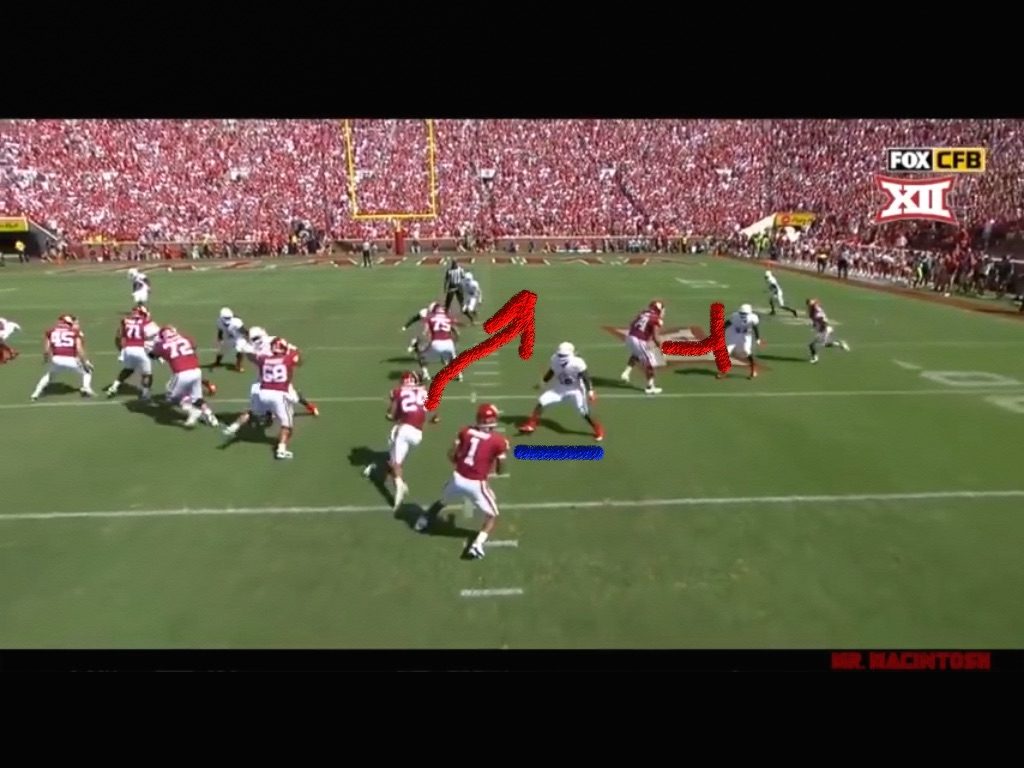 Rodney is one of the best one cut north and south guys out there.  He would have been a perfect fit for those old Denver Broncos offenses.  One cut, north, and south, get to the goal post.  The design of this play is absolutely genius and just another thing that defensive coordinators are going to have to deal with.  The recruits are going to keep coming to Norman because of play designs like this.  Lincoln Riley does things no one else does.  As he brings that top tier talent to town, no one will be able to stop it.  Heck, they can’t now. 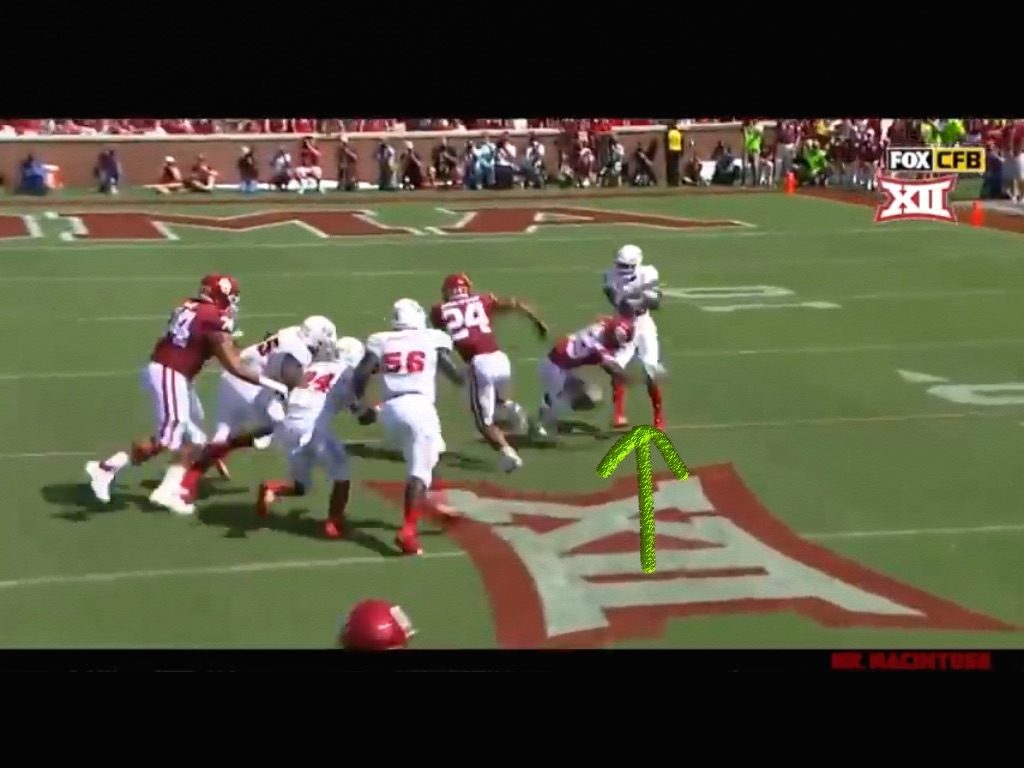 I said to myself “this would be a good spot for a block.”  Up by 7, early in the game, with the other team backed up close to their goal line, if you go all out rush, you still end up with good field position with a fair catch.  Beamer Ball came to Norman Saturday, and I was hoping we’d see something like this.  The Sooners just brought more guys than they could block.  3 blockers vs 7 rushers means somebody is going to be coming free depending on how the 3 man wedge blocked it.  By chance, if you do block it, you have more than enough guys to get on the ball.  Like offensive linemen, the guys protecting have to block the inside rushers first.  The man with the blue has to stay home and allow Lee Morris a straight line to the kicker. 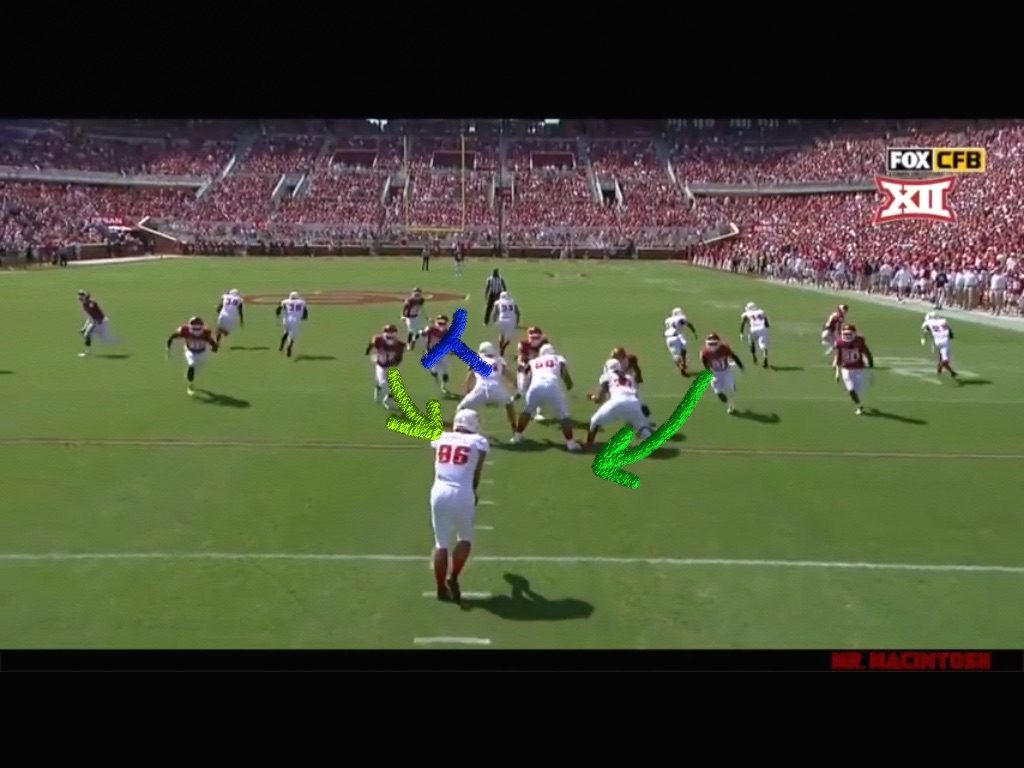 Lee is just one of those guys who does everything right.  It would have been easy for him to try to hit the punter or take the wrong angle.  He went right for where the punter’s foot was going to be.  This play was extremely well coached.  You have 3 free Sooners ready to pounce on the ball with Buzzy Bolton getting unblocked on the right. 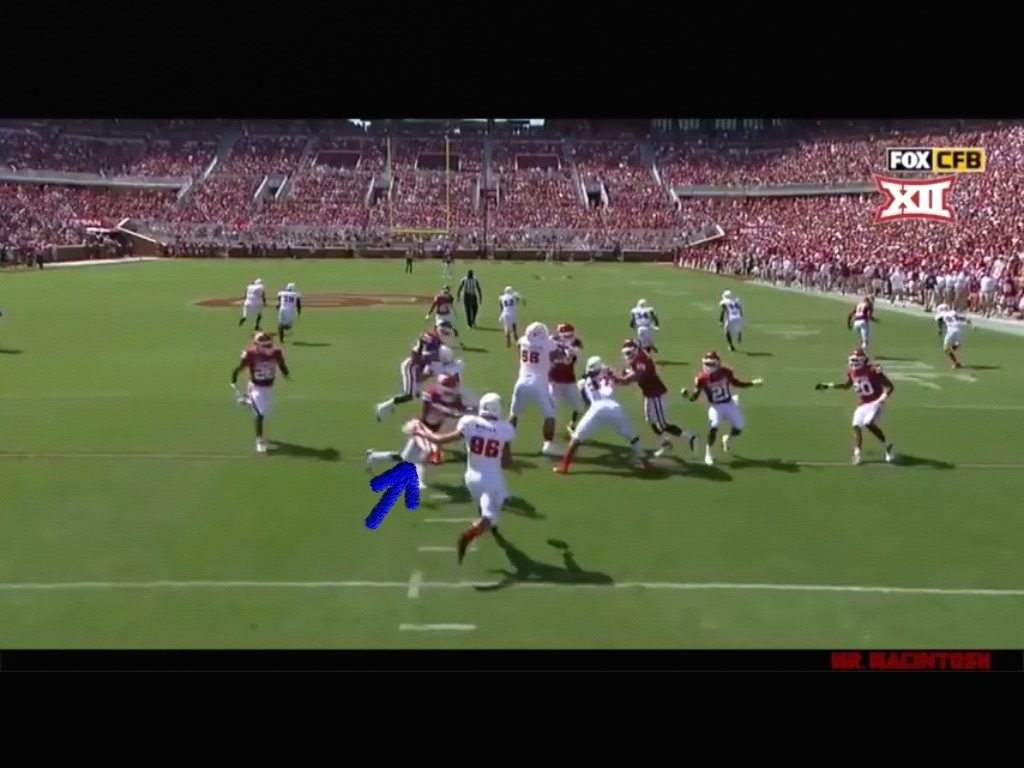 And while Buzzy pounced on this ball, the Sooners pounced all over Florida Atlantic Saturday.  While it’s only one game, this team, offensively, defensively and on special teams looked like the most well-coached version of the Sooners I’ve seen in forever.  If the Sooners stay fundamentally sound and healthy, it could be an extremely special year. 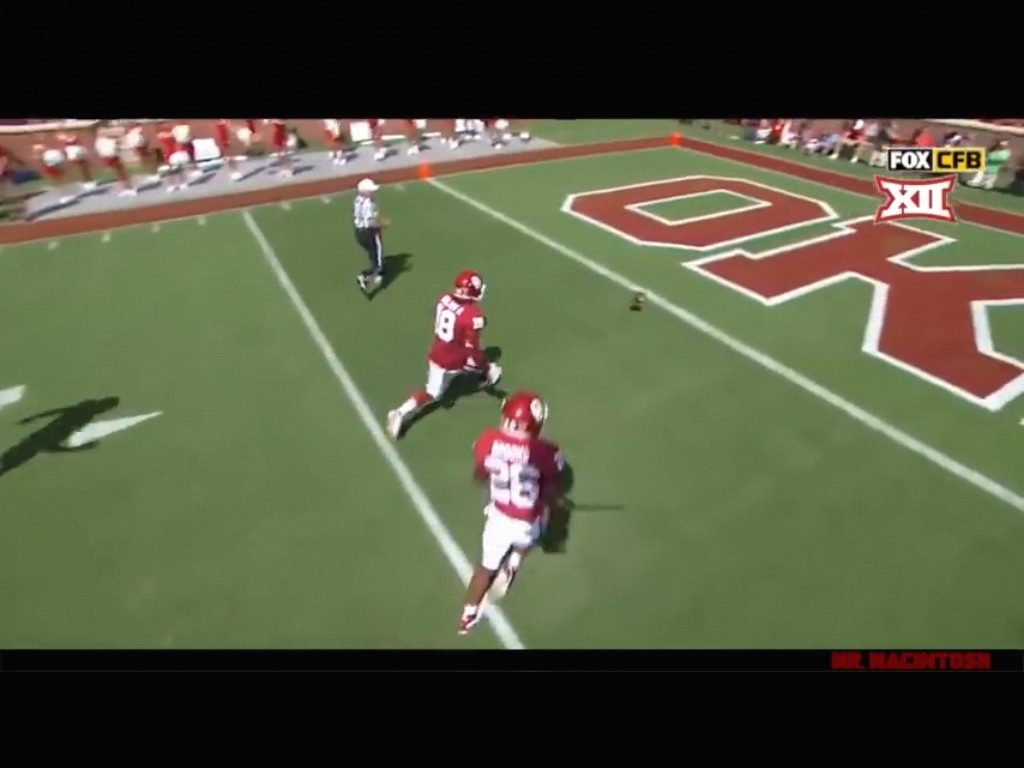