Wow, what a game right?!  Defensively it was very frustrating to watch, but looking at the offense, there was a lot to be happy about.  Baylor always looks aggressive because they stem a lot, meaning they move around a lot before the snap.  It doesn’t hurt that they wear those all black uniforms at home either.  Here, you can see the body language of the linebackers moving around and acting like they’re coming. 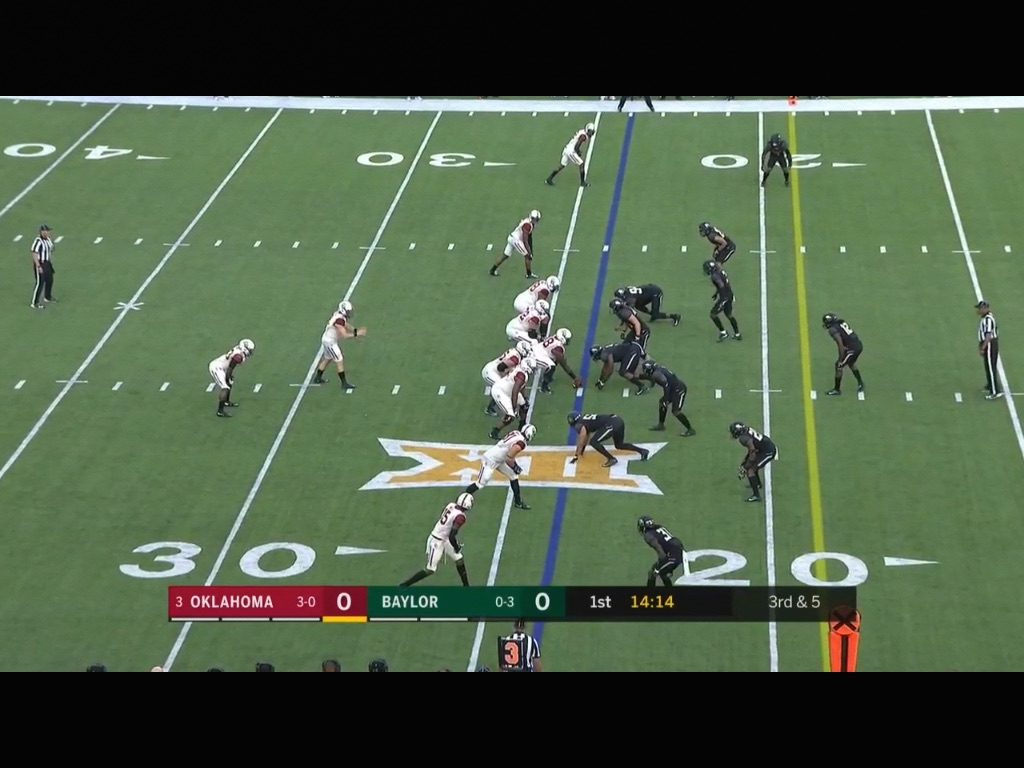 This is the same play, but we see right before the snap, the linebackers back off.  The benefit to having a veteran well coached offensive line and a calm QB is that they’re ready for a lot of looks.    Nothing to show in particular here other than how Baylor moves around and gives you a lot of different things to look at. 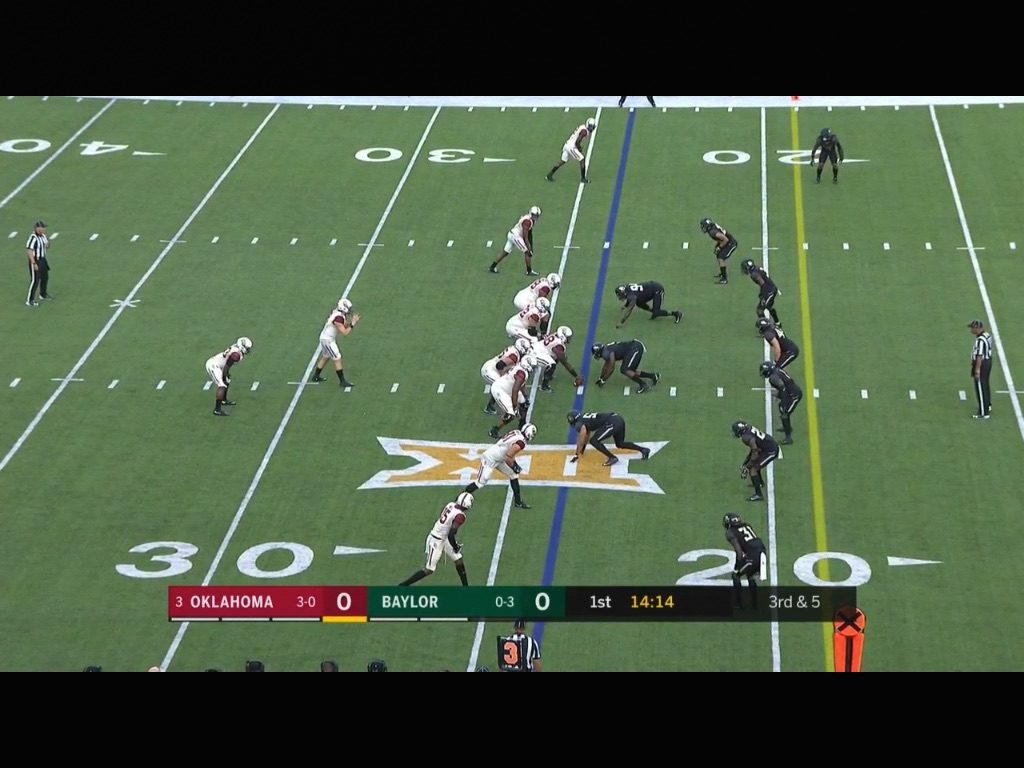 It ended up being only a 3 man rush and, while Baylor wanted to look aggressive, they dropped 8 into coverage.  It didn’t do any good, as Andrews sat down in the deep zone here and caught a nice ball from Baker.  It was 7-0 real quick and, while the quick score was nice, I think it made the Sooners think this would be a cakewalk… we all know it wasn’t. 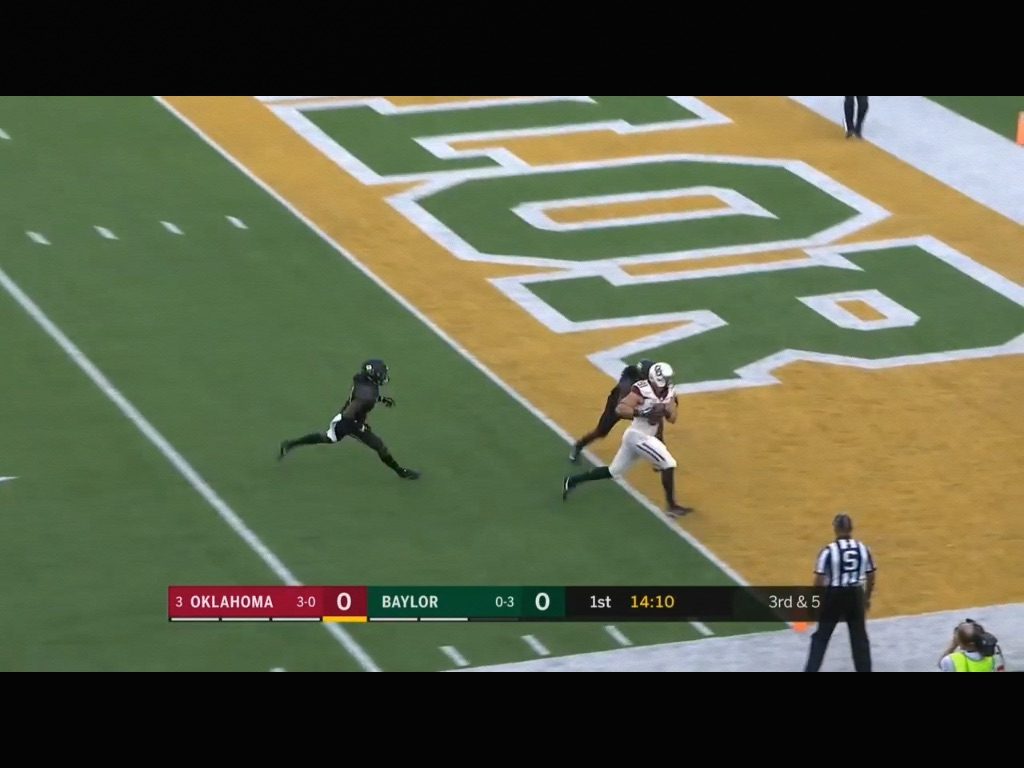 The beauty of this play is that the defense has to defend a lot.  And I mean a lot.  The fake to Abdul Adams on the far left forces the linebackers to fly outside to the right.  Dmitri Flowers is coming down on what appears to be a block on the linebacker.  Mark Andrews at bottom is giving a max protect look by staying in…or is he? 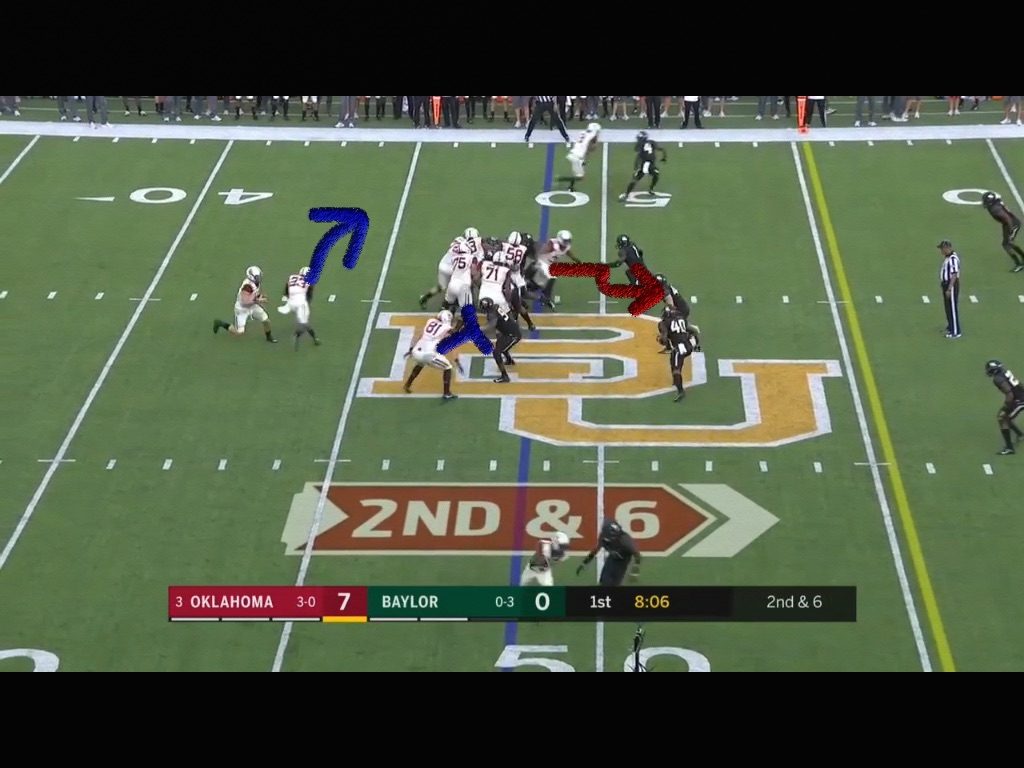 Well we all knew the Kojak with a Kodak snuck in Snowman’s back door on Smokey and the Bandit, but here Flowers snuck out their’s.  Below, we can see Andrews coming off of his block since the linebacker has turned to run with Dmitri. 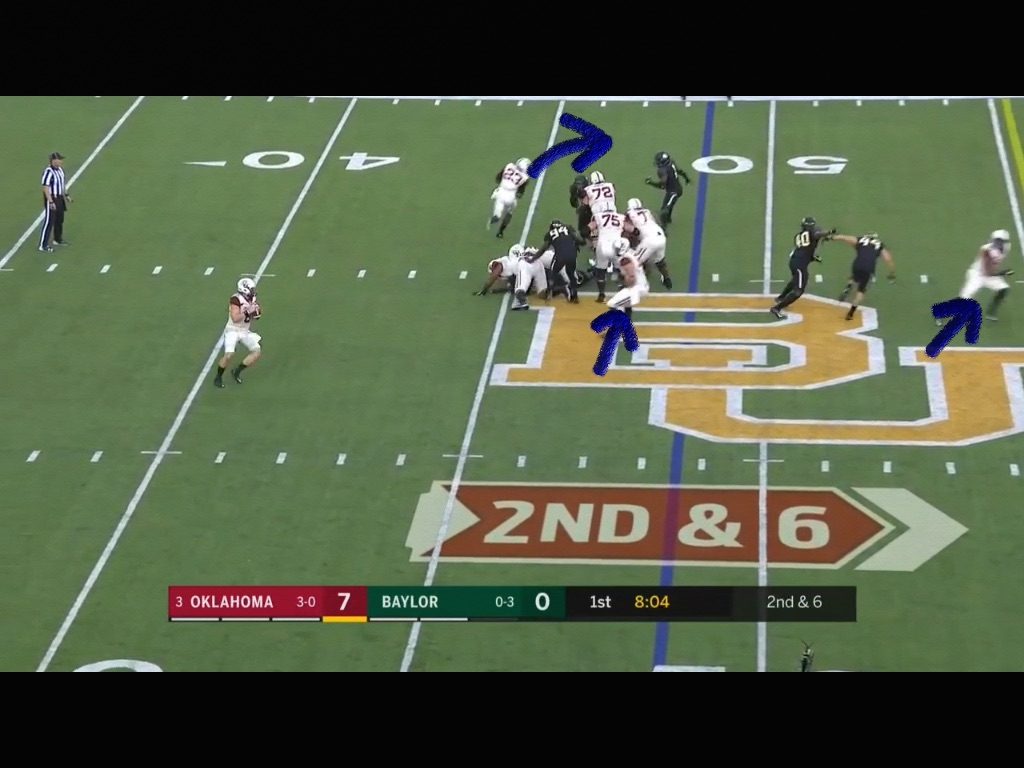 As Baker lets loose, this is a microcosm of defending Riley’s offensive design.  Once teams decide to lock down Flowers, they still have to account for Andrews standing all alone at the line of scrimmage as a safety valve.  In essence, Riley makes you defend EVERYBODY ALL THE TIME. 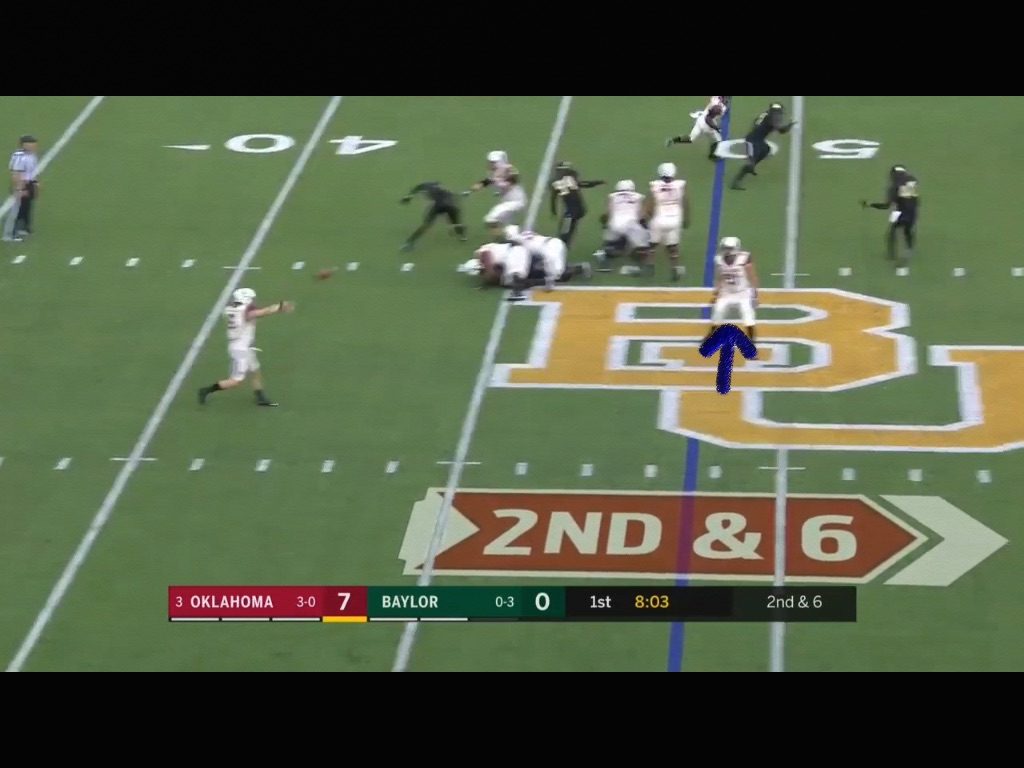 Flowers hauls it in and houses it.  Quietly he’s becoming a bigger and bigger weapon in this offense.  Everyone talks about Andrews, but, to this point, Flowers has been more productive. 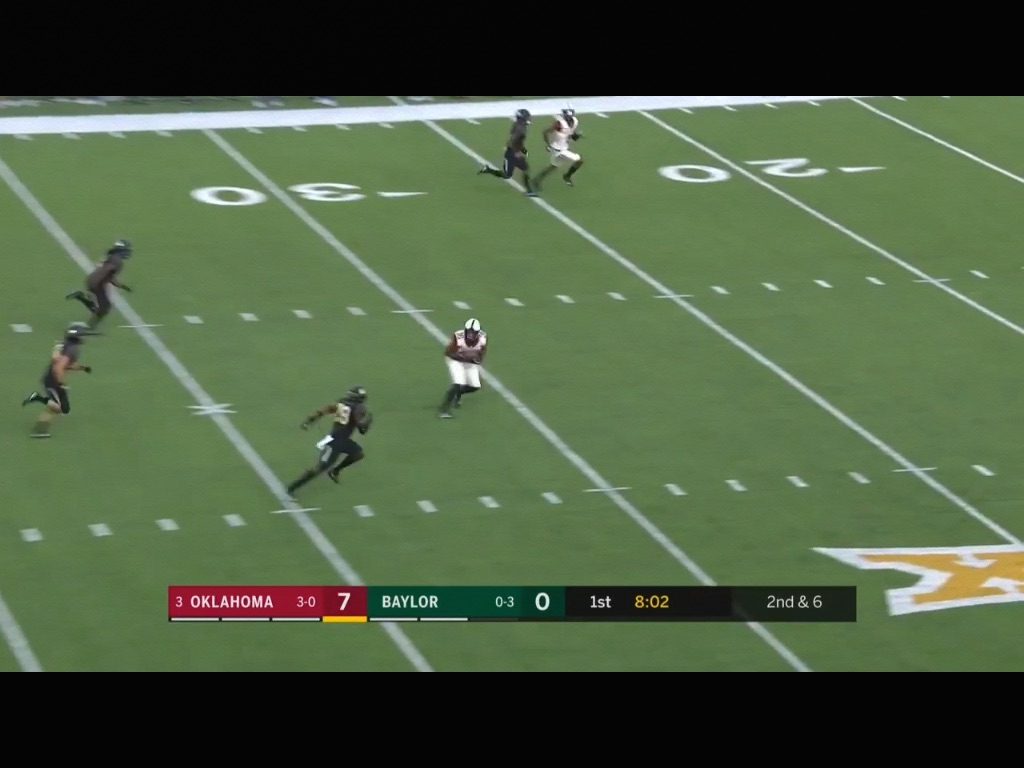 Speaking of having to defend EVERYTHING… Badet is in motion. Last week, the Sooners had a TD called back on a reverse to Jeff.  Now this is a jet sweep look, but #21 and the outside linebacker #44 are flying out towards the hash to account for him.  Since it’s a read option look, the Baylor defender on the goal line has to check Badet as well, but his primary responsibility is Mayfield.  I want you to look closely at the two red arrows.  The Linebacker #2 is flying up to plug the hole and try to get a safety.  Look at Dru Samia’s head.  See how he’s coming down on the nose, but his eyes are upfield? 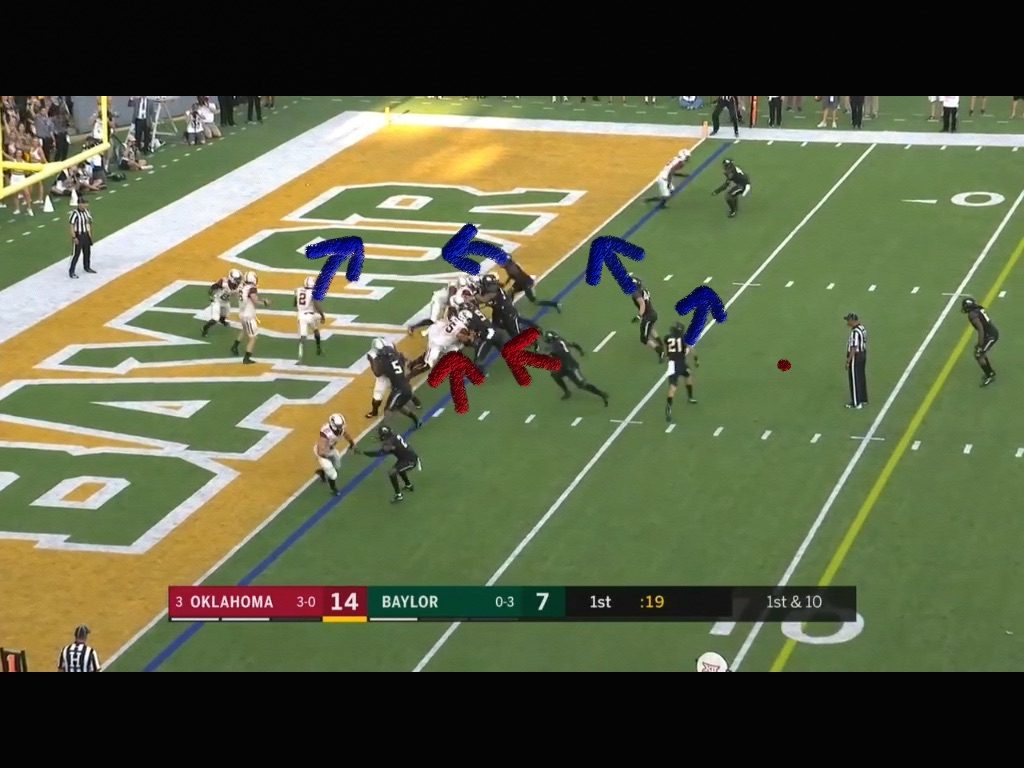 A split second later, Baker gives the ball to Adams, and he sees the crease up in behind the double team of Orlando and Ben Powers.  Great blocks all the way across the line, and a nice pickup on the edge by Flowers (top blue arrow) taking the inside guy and forcing the blitzer to work around his block.  Had he taken the outside guy, then the guy he’s blocking tackles Adams in the endzone.  ALWAYS work inside-out.  The 2nd from bottom blue arrow is Samia, who is locked up on the linebacker who was coming in the shot before. 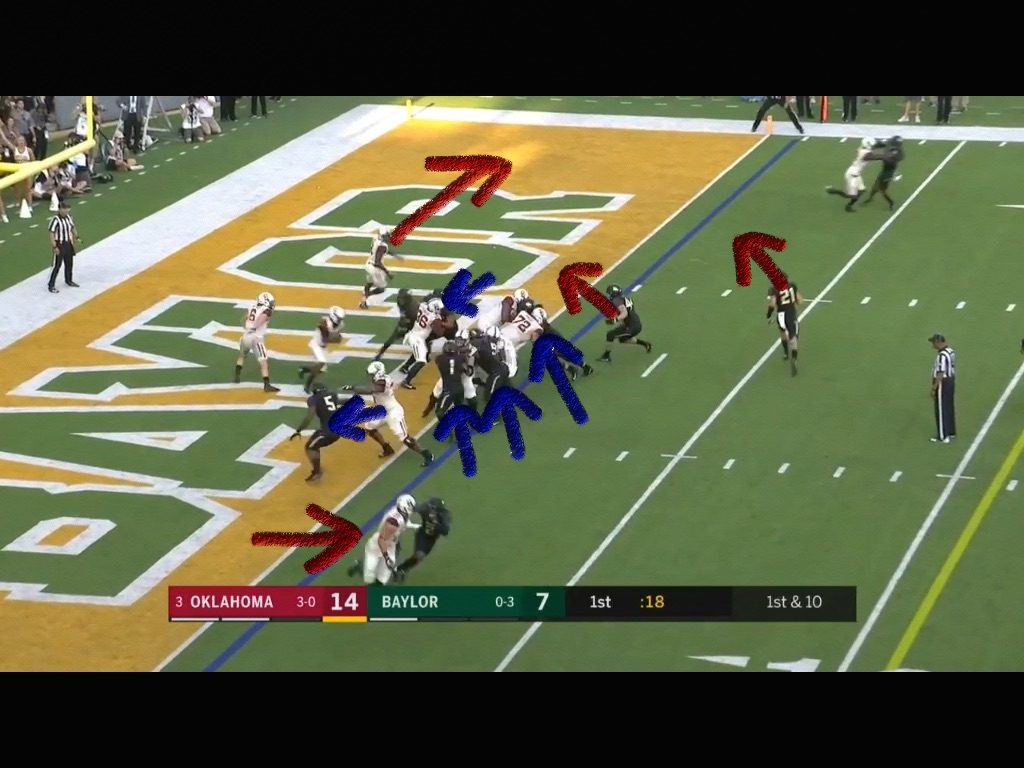 As Abdul clears the double-team in behind big Ben Powers, the motion of Badet and the option for Baker to pull it has pulled several people out of the box.  So the design of the play moved people out of the way, creating a one-on-one situation for Abdul Adams and the safety on the 7 yard line. 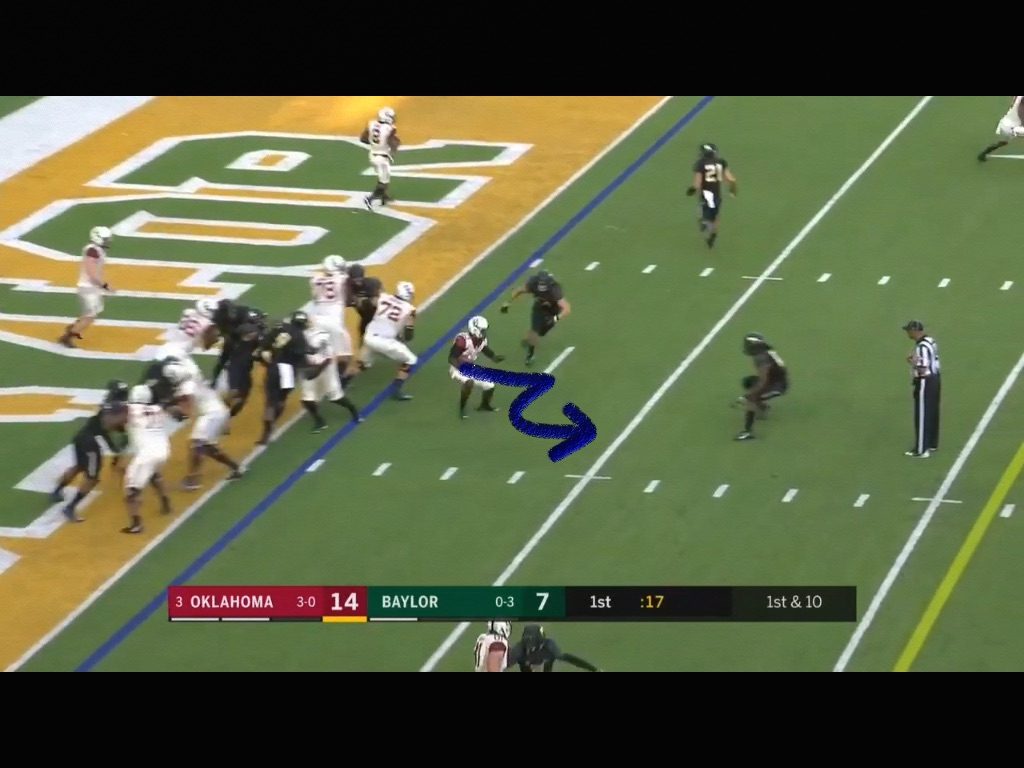 You’ve heard me say it before, as an offense, you want to get your tailback in one on one situations with the safety.  Abdul showed his vision, shakes, and long speed on this run taking it 99 yards and setting a Sooner record for longest run from scrimmage! 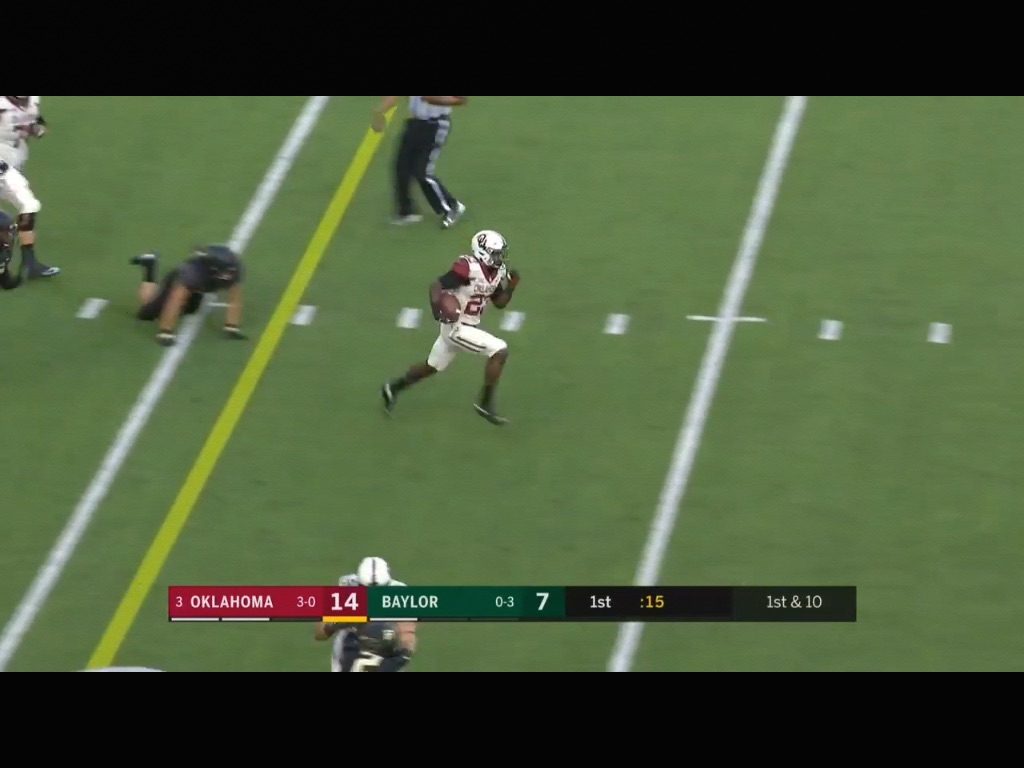 Looking at the Box on the power wildcat look, there are 5 defenders to the right offensively and 4 to the left.  This is a double tackle look or “off balanced” look with Bobby Evans lined up to the left of Orlando Brown to the bottom. 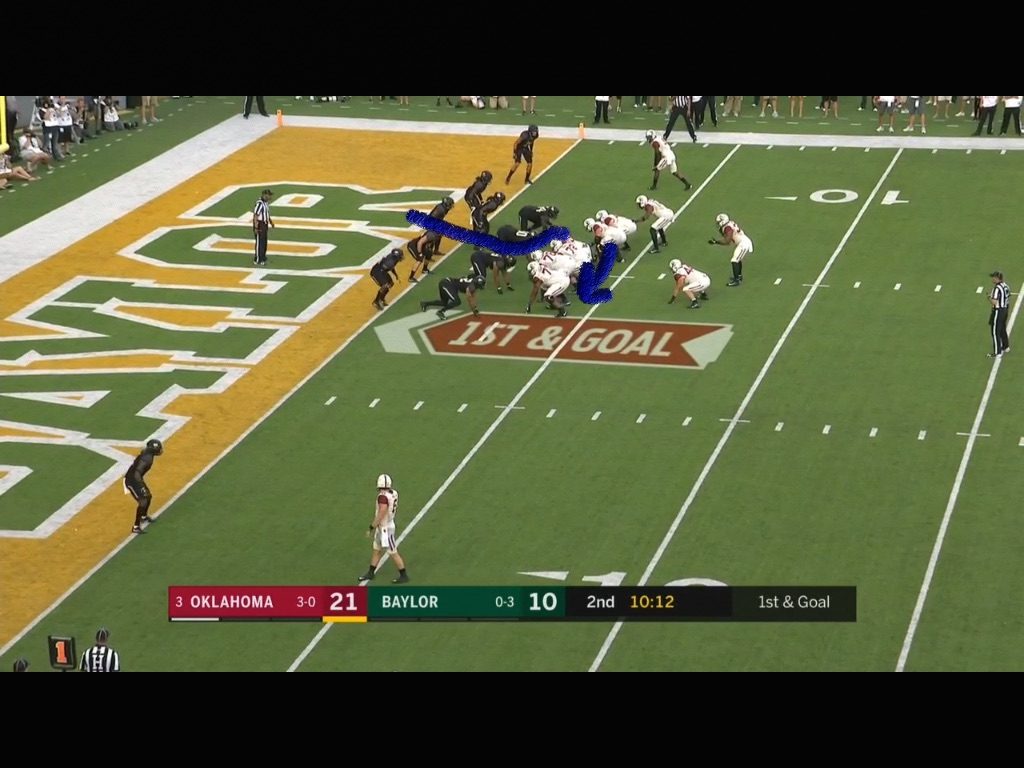 As Samia came around on his pull, his block is supposed to be #52.  Since, however, #52 crashed down inside, Jaxon Uhles, playing fullback here had to pick him up.  Samia recognized in a split second that he had to get outside of the block.  Running to numbers advantage here really helped the Sooners, as at this point, the end had spun off of Bobby Evans’ block to the bottom left. 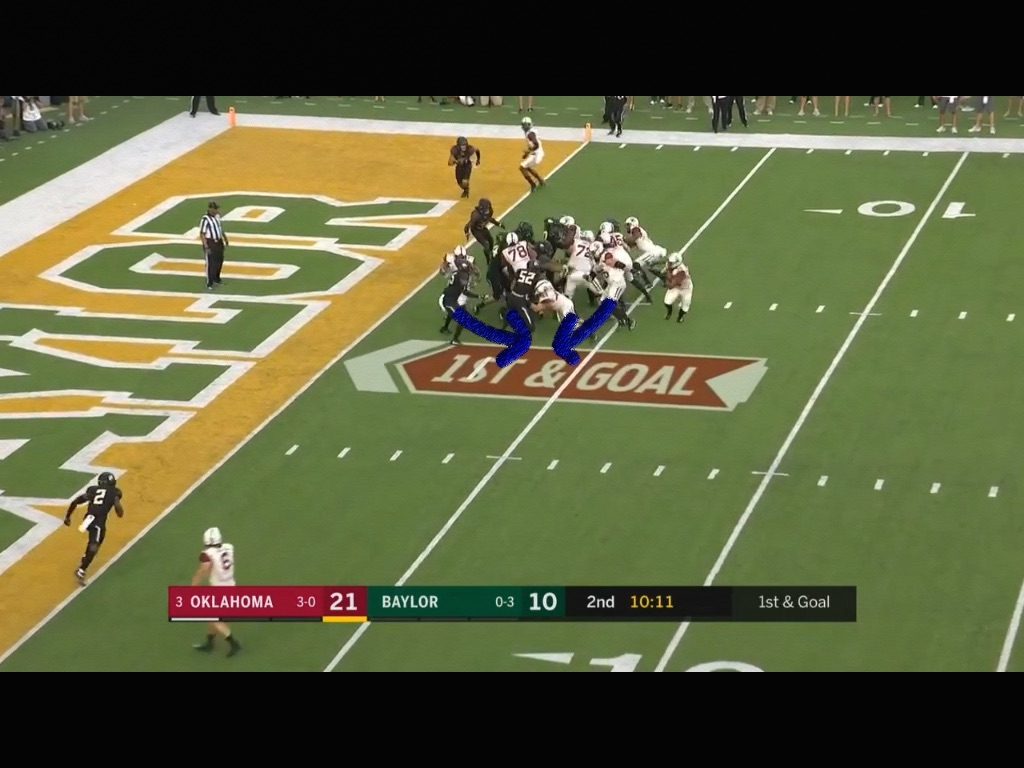 But since OU had more blockers than they had defenders, this allowed Samia to pick up Evans’ guy who came unblocked.  Evans then worked down inside and went “Looking for work.”  Right here we see Flowers recognize it and get up inside of Samia.  To Dimitri’s right shoulder, #99 for Baylor is coming unblocked.  Against better defensive lines, this is something we’ll have to clean up. 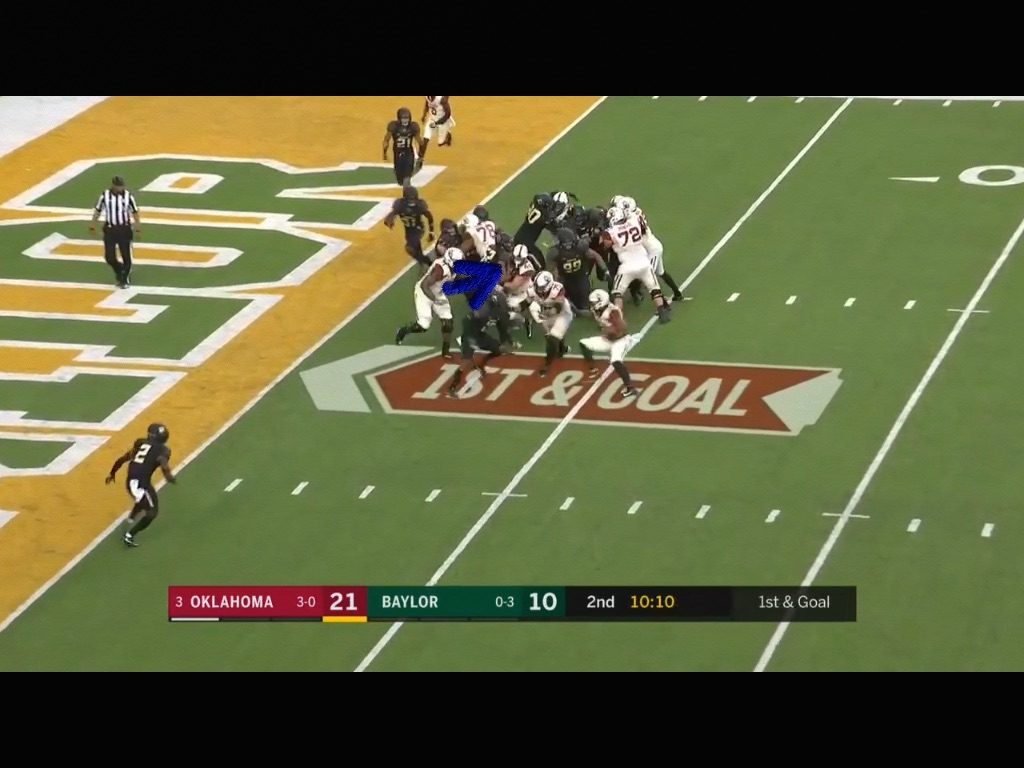 This is and was the most physical I’ve seen Dmitri Flowers be.  As he’s getting older, he’s getting nastier.  The toughest part about defending this offense is that, once you have all of your assignments right, are you physical enough to do anything about it?  Look at Big Orlando Brown makin’ Pancakes. 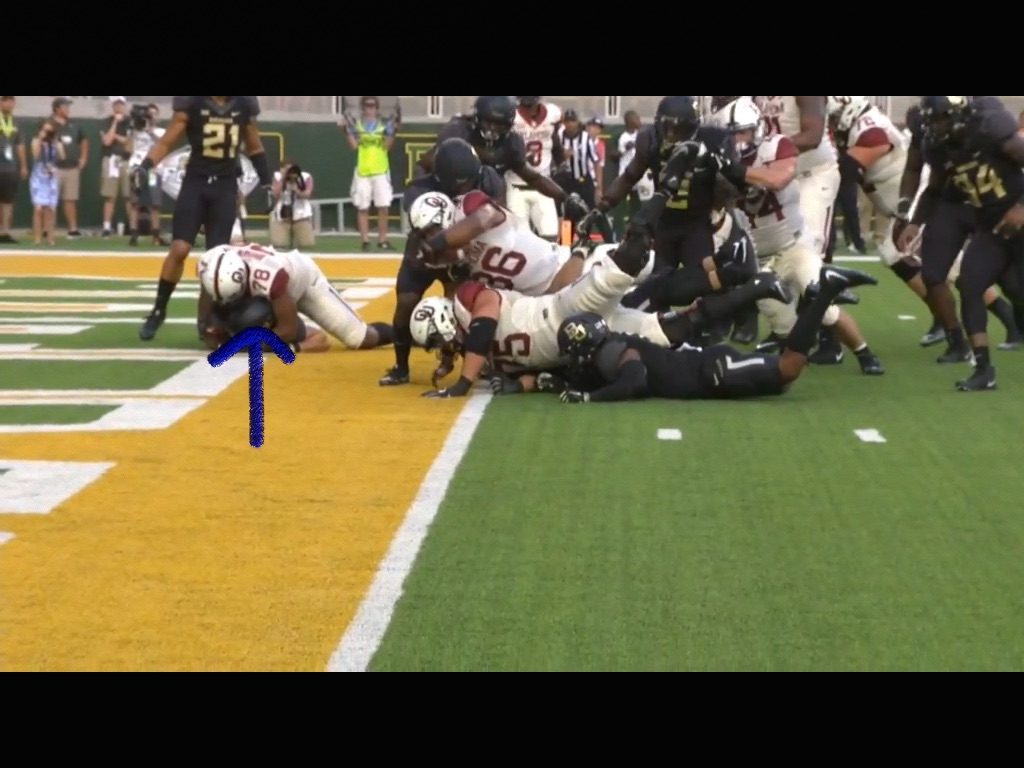 On the 3rd and 8, I recognized a 5 man box and thought to myself, man this is a good run look.  I laughed out loud when I saw Baker hand off on the draw to Sermon here.  The beauty of this play is that, while it’s a passing situation, the defense was begging the Sooners to run.  With 5 blockers and only 5 people to block, a hat on a hat equals a big play. 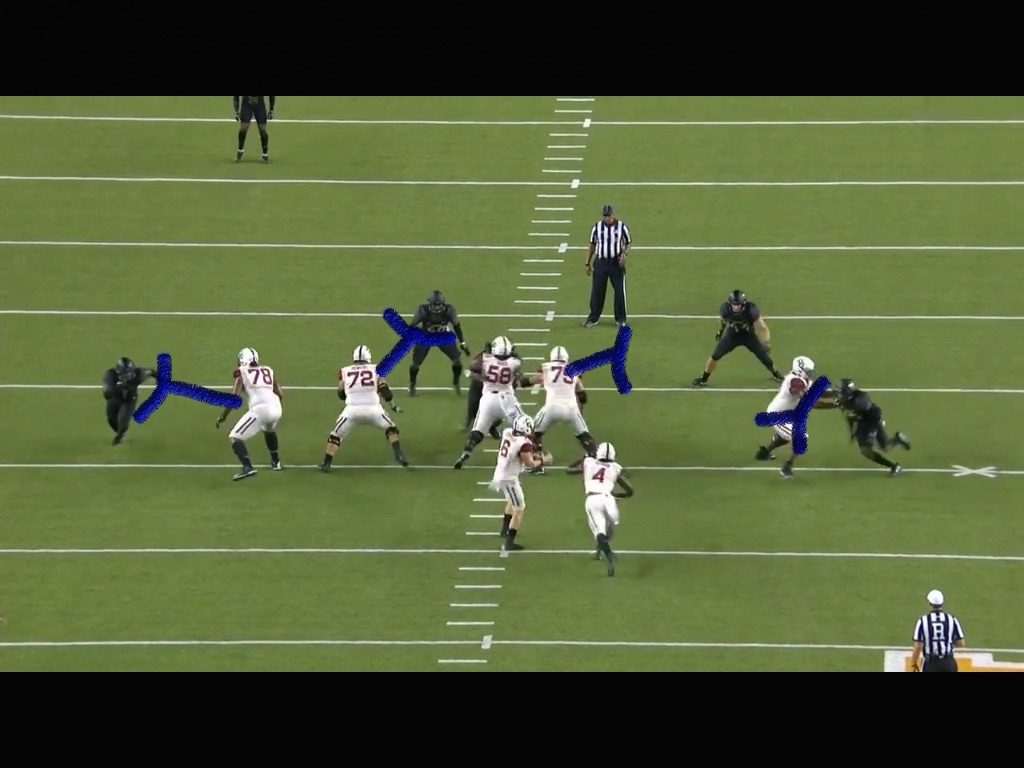 And, as Sermon got the ball, you could tell that’s what it was going to be.  Powers and Wren are doing a great job on their two guys, while Samia is handling the backside linebacker.  O has his guy covered, and Evans did exactly what you want to do on the backside on a draw play.  If that guy wants to get upfield and go around you, then let em.  No matter what though, don’t get beat inside.  Since he forced his guy to go around him, there’s no chance he’ll run Sermon down from behind.  I-35 north is open and ready for business right up through there, and you can see the safety’s feet at the top of the picture. 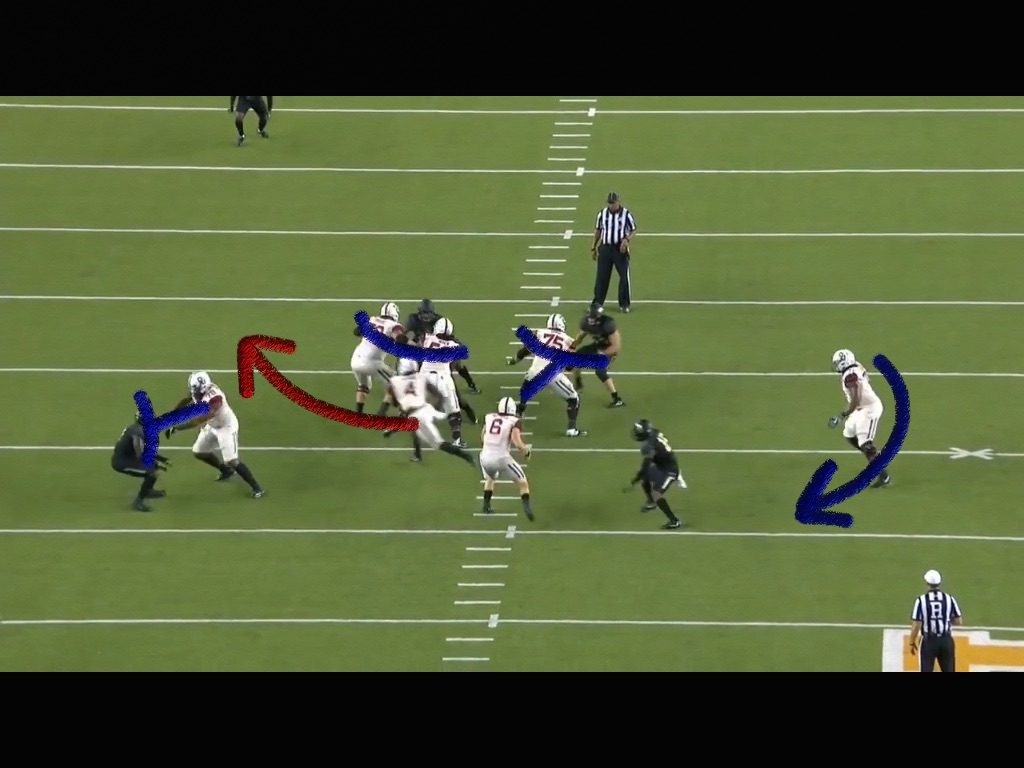 Like I’ve said a few times, getting your backs one on one with the safety is a good thing.  The safety here has a bad angle on Sermon and may have underestimated Trey’s speed.  Look at how Trey is leaning to the right to draw that defender in to set up Lamb’s block. 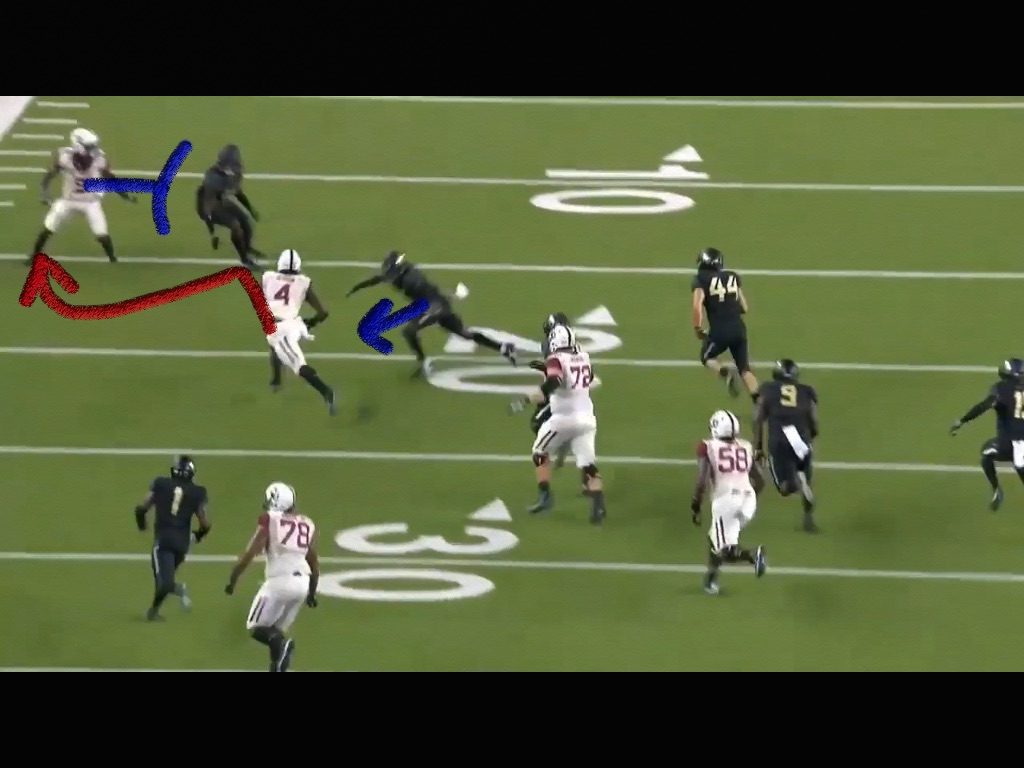 That safety has no chance at arm tackling the power back from Marietta, GA, as he’s headed for the promised land down the stripe.  CeeDee Lamb decided he wanted to play dominoes, because as he knocked his guy back, it took out #44 too.  Great block by the Freshman receiver to spring Trey for the TD that iced it. 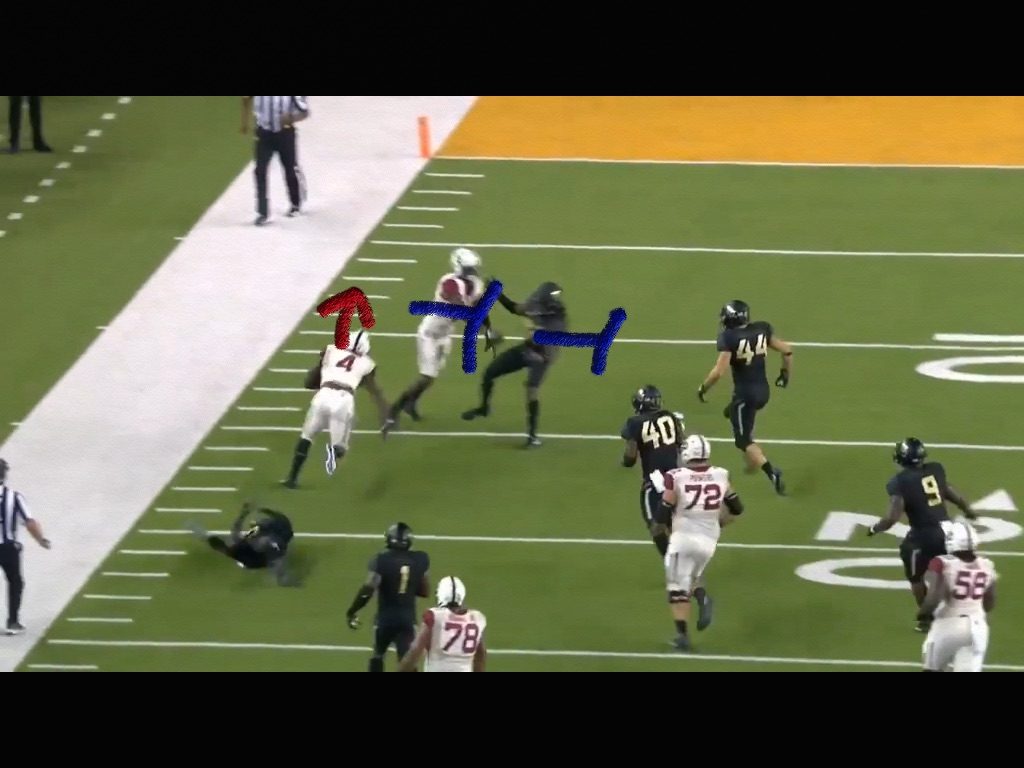 The Sooners finished the game running 40 times to only 19 pass attempts for Mayfield.  With 342 yards, the Sooners averaged 8.6 yards a clip.  Before the end of the game it was 9.9, but three kneel downs brought the average down.  Adams finished with 11 carries for 164 yards and a TD, while Sermon had 12 for 148 and two scores.  It’s crazy how OU has gone from having a 1-2 punch of Mixon and Perine to what appears now to be Adams and Sermon.  With a lot of other weapons to choose and a heck of a trigger man in Mayfield, if the Sooners can fix their defensive woes, they’re going to be daaaang hard to beat.