I touched on it a bit in my initial thoughts post yesterday; like most of you, I was very curious to see how the Sooners would come out.  Last year, when the Sooners ran the ball more times than they threw it, they were nearly unstoppable. It seemed that once Riley figured out that he could lean on two NFL backs and a great offensive line, the Sooners figured out who they were and were one of the more dominant teams down the stretch.

I must admit that I was a little concerned that, without Bob around anymore, we may see more passing than we ever have.  While I’m as big of a Baker Believer as anyone, this offense is prolific when it runs more than it passes.  Saturday afternoon:  36 passes…38 rushes.

I’m not sure if this play below was a called give, but the correct read here would be for Baker to pull it on the read option.  The D end closed down, but Abdul Adams was through there before the defender could do anything.  I’m not so sure the D-Ends for the Buckeyes will allow that next Saturday.  Abdul Adams looks like one of the fastest backs we’ve had in a while, and I’m excited to see how good he can be once he gets more comfortable in the offense. 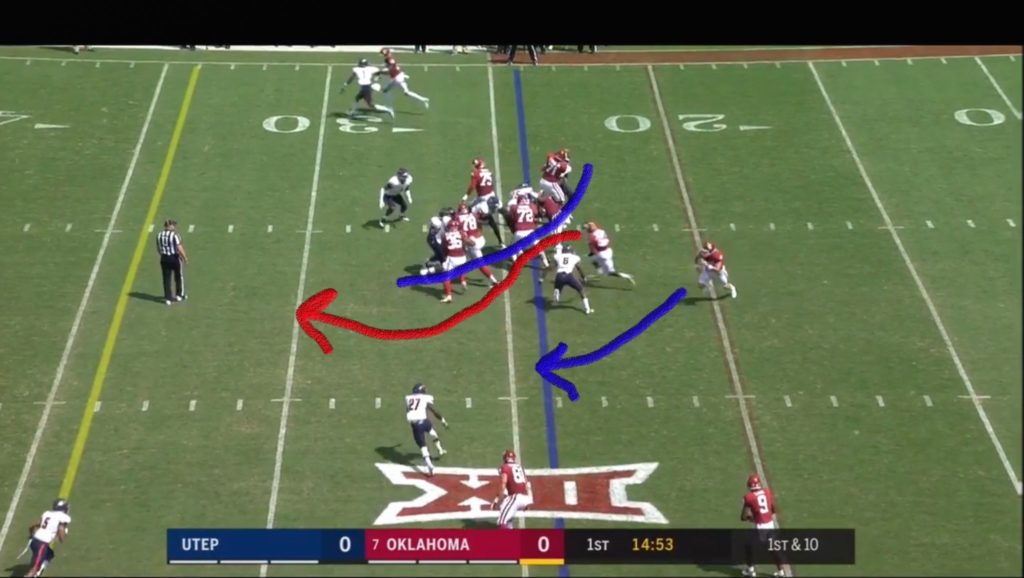 Mark Andrews looked like the best tight end in the country on Saturday.  Mayfield went to him early and often.  He’s going to need to play a huge role in the offense against the Buckeyes if the Sooners are going to win.  The offensive line was the great Crimson wall on this play and many others. 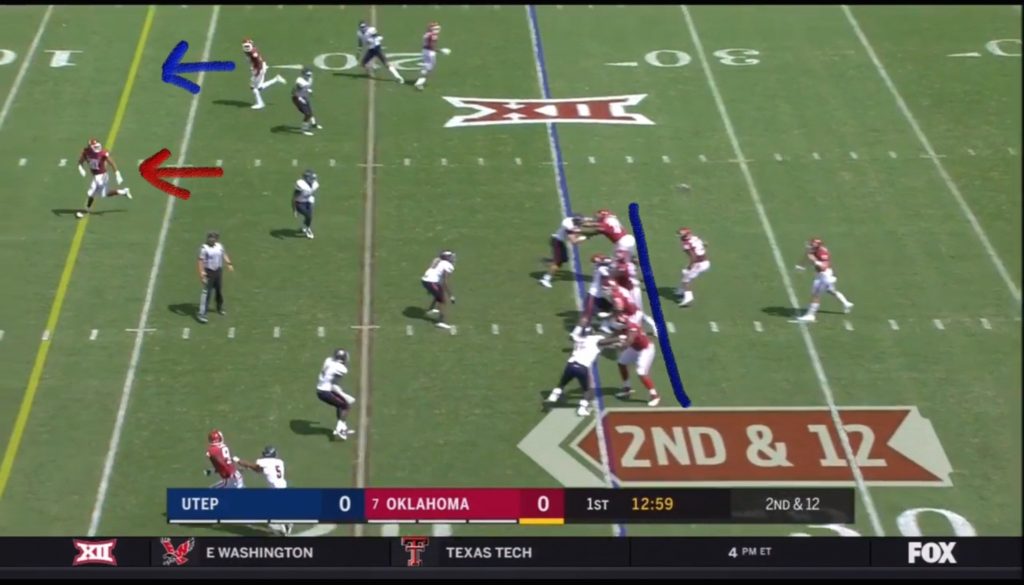 This is the first time this year you’ll hear me say that running the ball is as much about outnumbering people as it is about being physical.  UTEP had 7 on the line against only 5 blockers.  The safety is trying to get over to the trips on the right side as this is cover zero.  Due to sheer numbers, someone is coming unblocked. 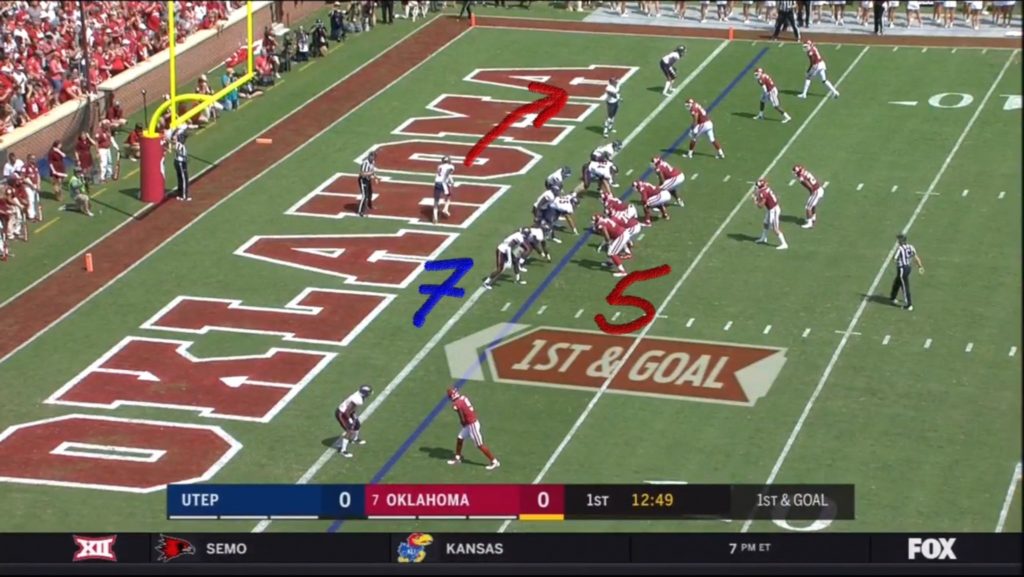 Sooners run counter left here with the guard and tackle pulling.  The two blue arrows notate defenders, who due to sheer numbers, are going unblocked.  While the Sooners scored on this play, this design is particularly concerning.  Ohio State, TCU, and others will attack this and be aggressive.  The bottom blue arrow will attack and be on top of the RB at the mesh point (where the ball gets handed off). 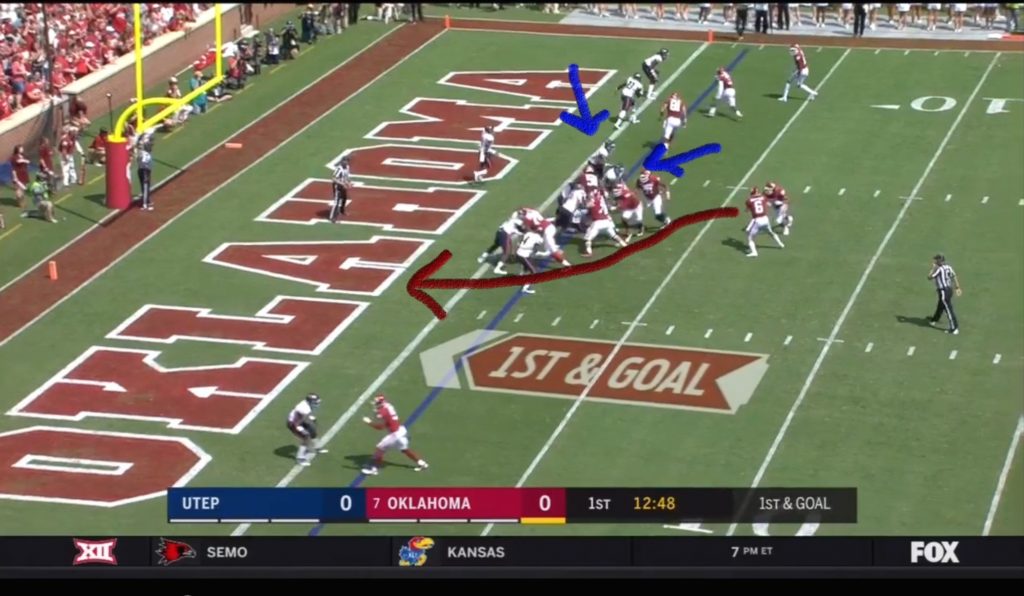 UTEP did that here, but Rodney Anderson outmuscles the defender and walks in for a score.  Backside players in great defenses make a lot of plays, and the Sooners need to make sure they scheme to numbers to have an Elite running game.  The O line did a nice job getting a hat on a hat, but 5 blockers vs 7 defenders is basic math – not ability. 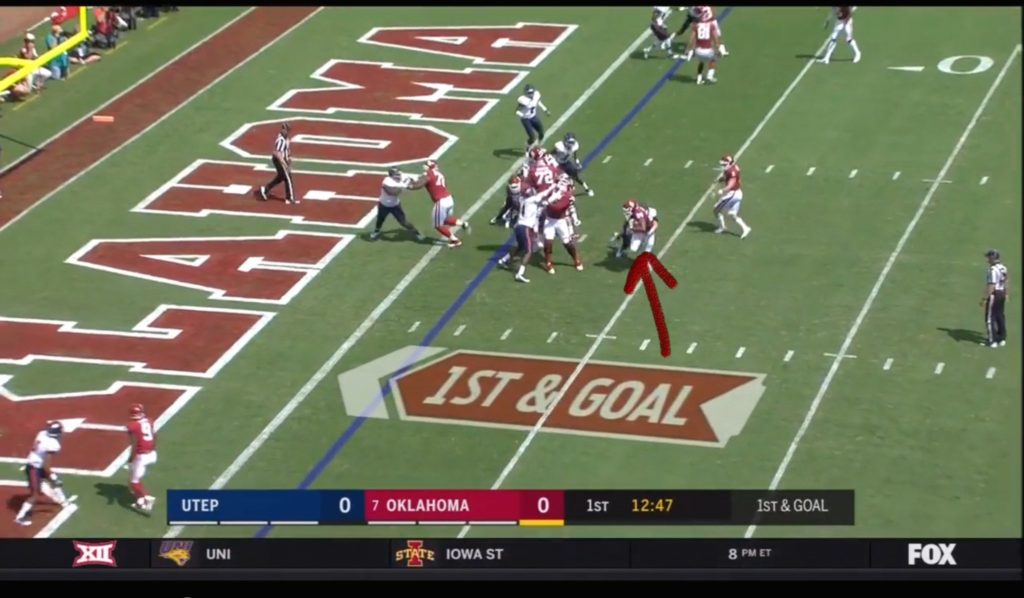 Now before everyone panics, Riley did a nice job adjusting the formations in short yardage as the game went on, and I’ll outline those in a bit.  The good news is that the Sooners were still able to overcome the shortcomings of the formation on this play and walk into the endzone. 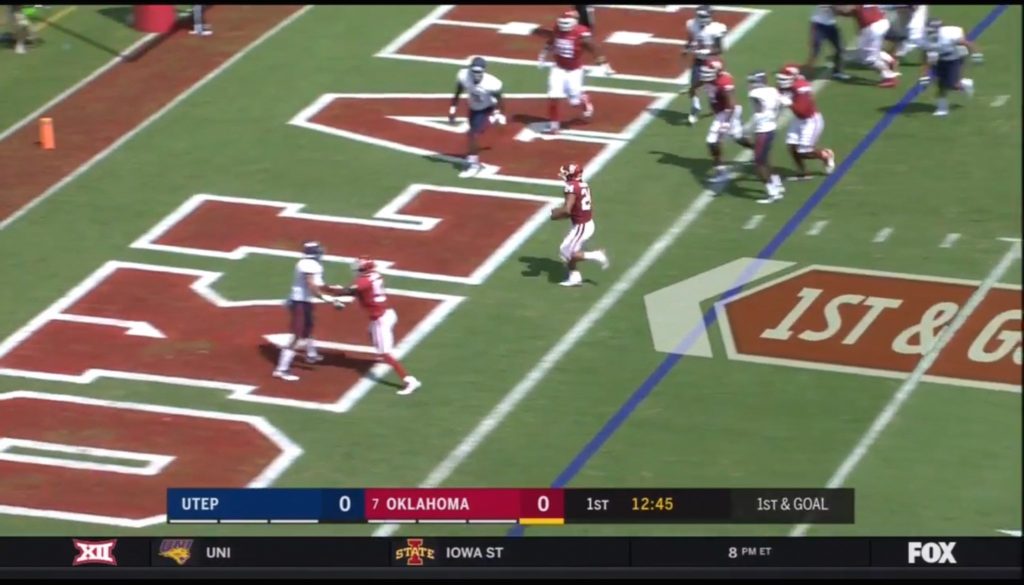 Here again we see the play action.  The run game was gashing the Miners so badly that the defense had to honor the run game.  All of the lb’s get sucked up into the line and you see Mark Andrews running wide open again.  If the Sooners can run the ball like they did Saturday, then it’ll be a long long year for opponents. 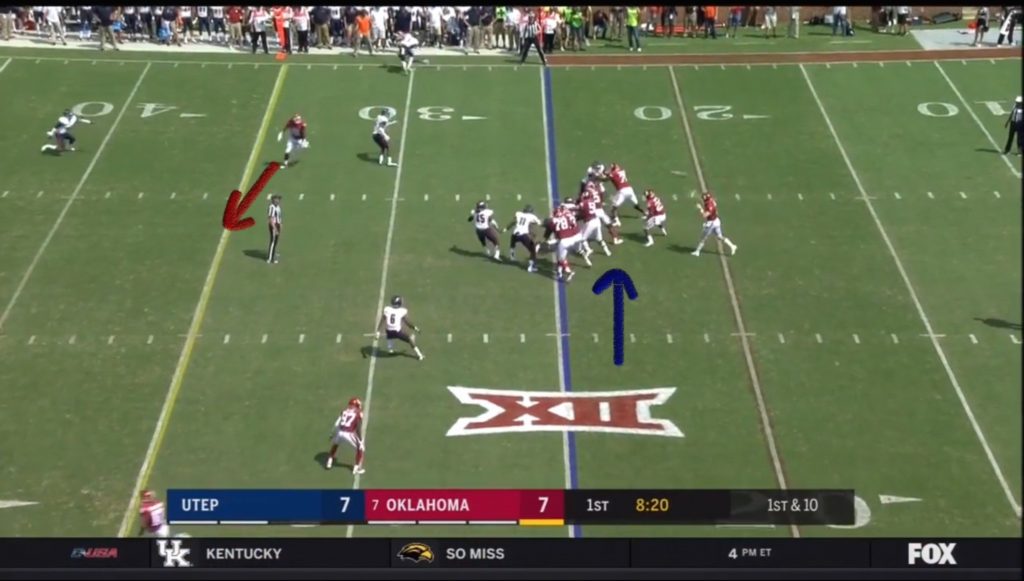 Here, you see the same counter play against a front better suited for the call.  The player with the blue arrow, by design, is unblocked.  This is a setup play, as that defender has to honor Baker potentially keeping the ball and rolling into the trips on a bootleg.  That freezes the defender and allows this play to work.  Against more aggressive D coordinators, that unblocked defender will attack Baker and force the issue, or attack the RB.  The Sooners were very vanilla Saturday, but the genius of Lincoln Riley is tweaking small things to dictate terms to the defense.  Please note Erick Wren in the middle “blocking back”. 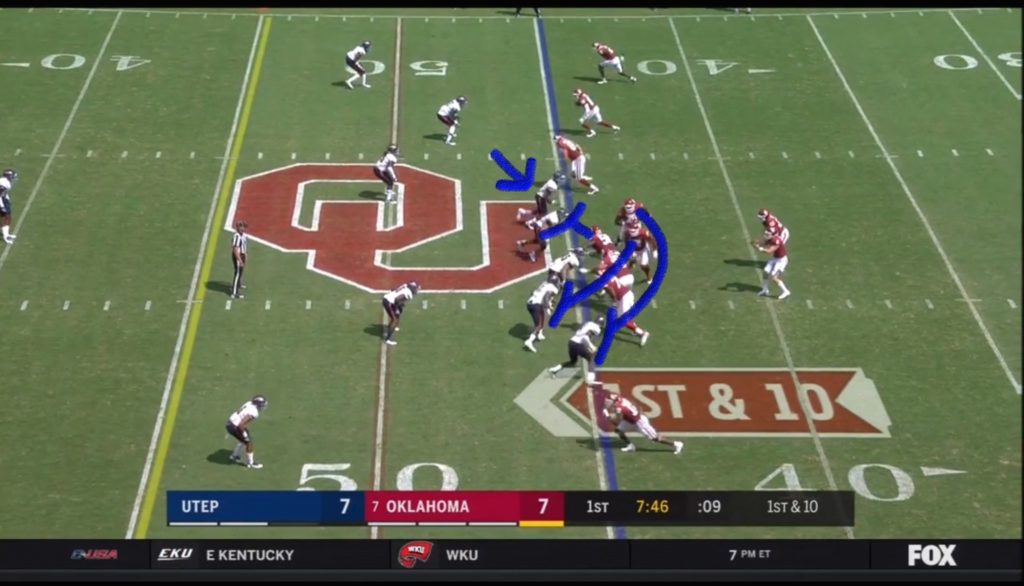 So here, since Erick executed the proper technique of staying on that inside shoulder of the defensive tackle, it forces the defender to work around Erick on the path of the light red arrow.  Now, had he been wrong in his technique and allowed the defender to get across him on the path of the blue arrow, then potentially the defender blows up the play.  This is a tough block for centers, as you’re one-on-one after you snap.  Gotta give a gold star to Orlando Brown, as he’s driven his man all the way across the formation; “caving the side down” in essence and making the play possible. 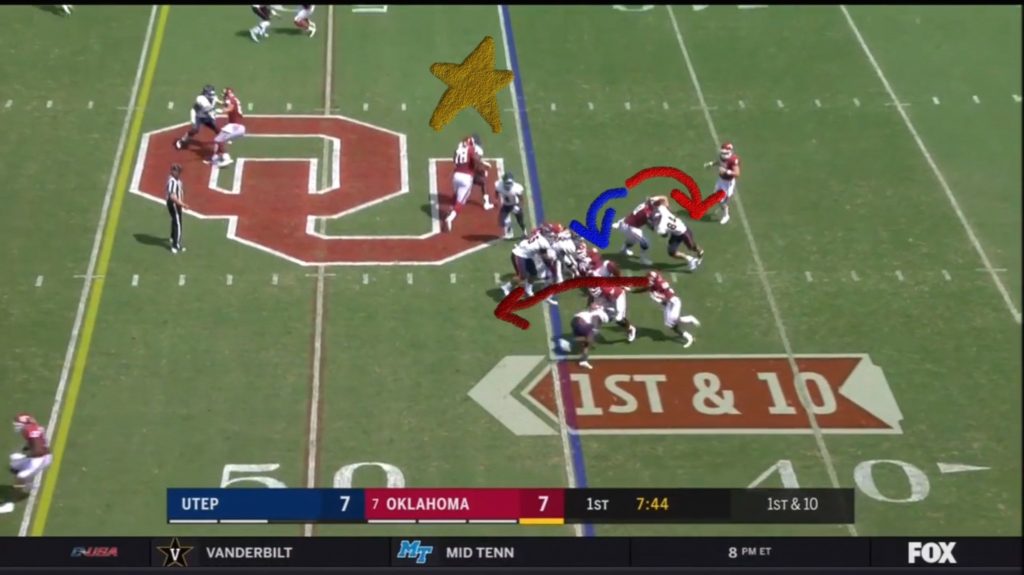 Nothing technical here to point out other than just great execution by the o line and receivers.  The group of backs as a whole is faster top to bottom than we’ve had in a while.  You used to hear the nauseating term “SEC speed” a lot.  Guys like Sutton, Adams, Badet, & Marquise Brown looked particularly fast on Saturday.  I’m confident that Riley is going to find ways to let their speed take over.  Holes like this doesn’t hurt either. 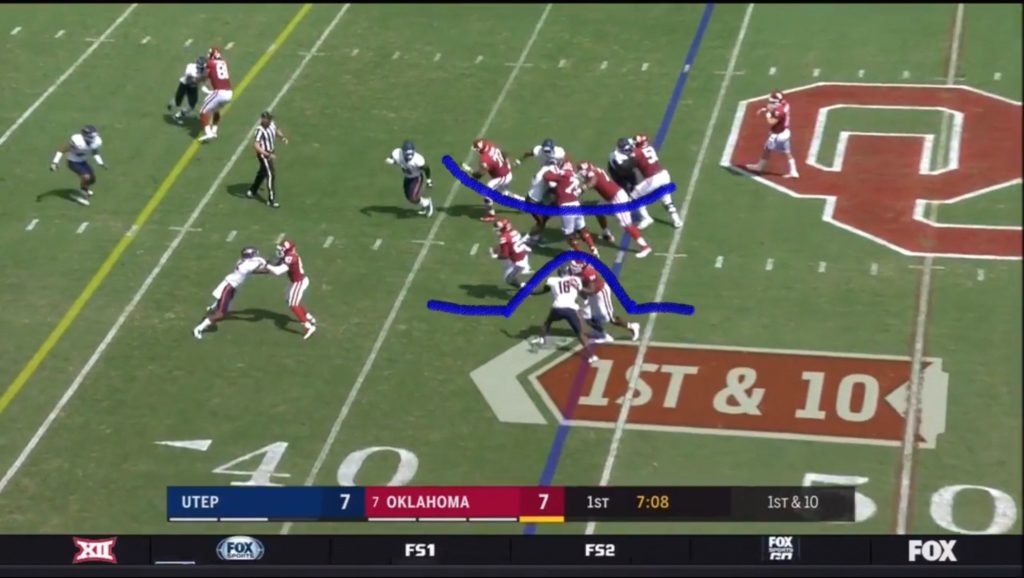 So back to the theme of outnumbering people:  6 Defenders right, 4 left, and man coverage to the bottom.  Defenses have to line up where your numbers are offensively; what they can’t account for if you execute is when you pull the strongside guard & bring the fullback across.  The wing, in this case Jordan Smallwood, on the right stays back to clean up the garbage and prevent the backside players running free defensively. 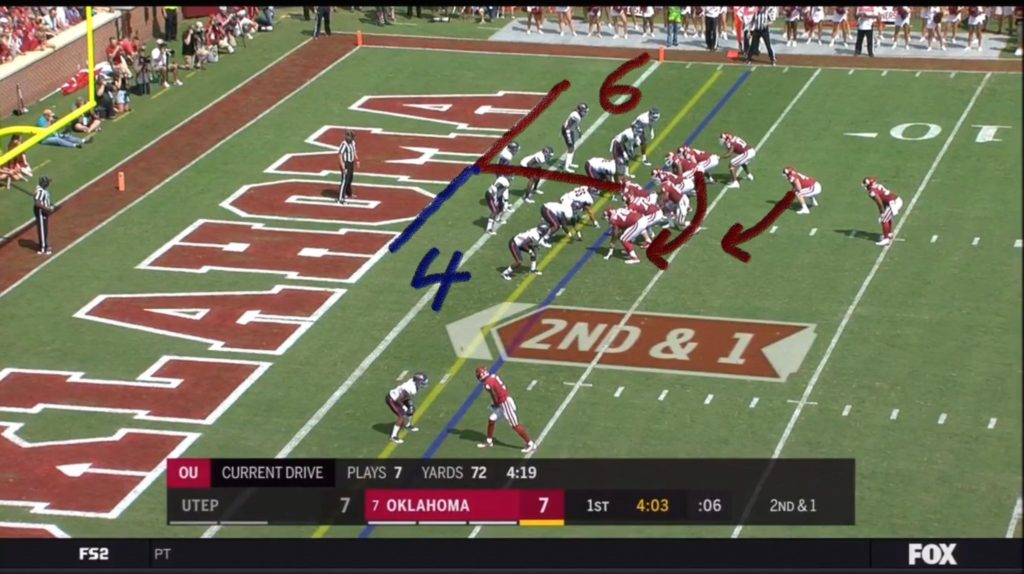 Here’s another screenshot of the same play and defensive formation.  Look at all the defenders to the right of the red line, which basically is Erick Wren’s left shoulder.  I’m a big fan of weakside runs, since you can dictate numbers and your back has less defenders to deal with going left in this case.  It wouldn’t shock me to see this formation a lot as the season wears on and then have Smallwood blocking and sneaking out late for a wide open dink TD off of the counter action. 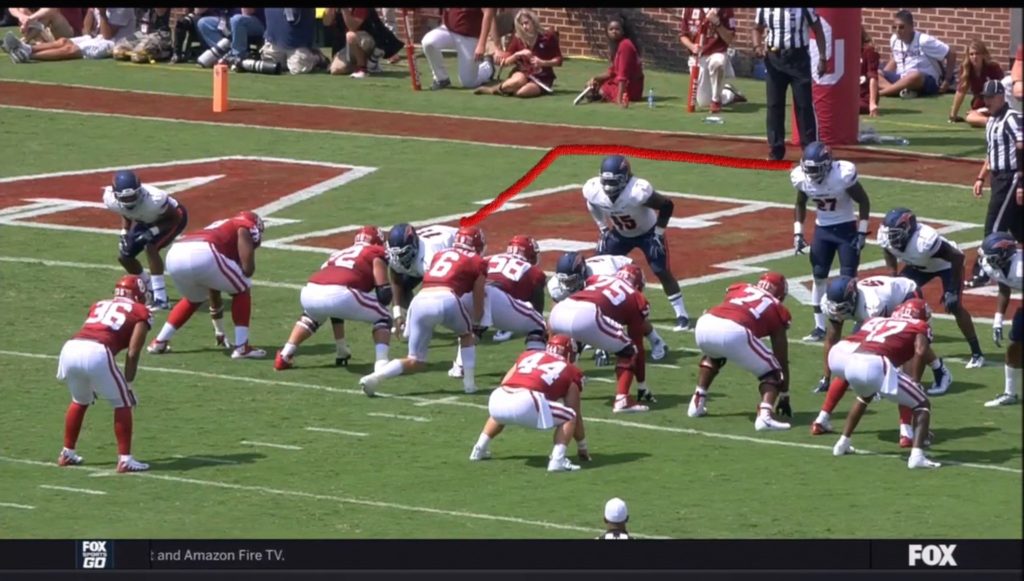 This is just mass carnage by the Sooner OL.  Orlando got willed Bronson Irwin’s tortilla maker from a couple of years ago, and is putting it to use here.  Samia misses his block, but Sutton’s too fast and is through there in a blink.  I saw a couple of Sooner OL starters get pulled when stuff like this happened.  It sends a strong message to the starters that they have to perform. 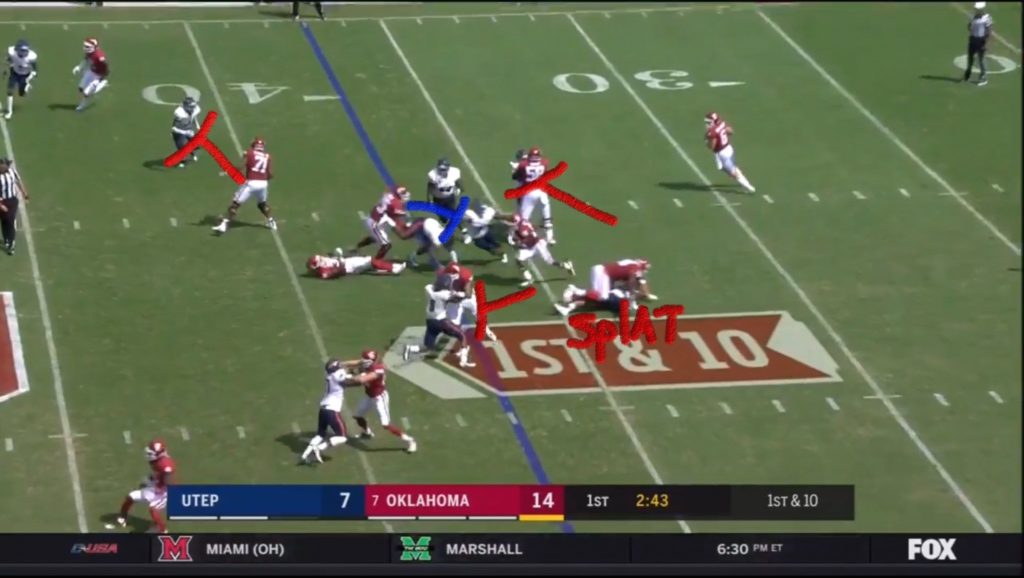 This is what I was alluding to with Adams running a bit too hard.  If he cuts outside here it’s a big play and possibly a TD with his speed.  He gets a first down and made a good run, but it could have been a great run if he gets outside and doesn’t negate the leverage of his blockers. 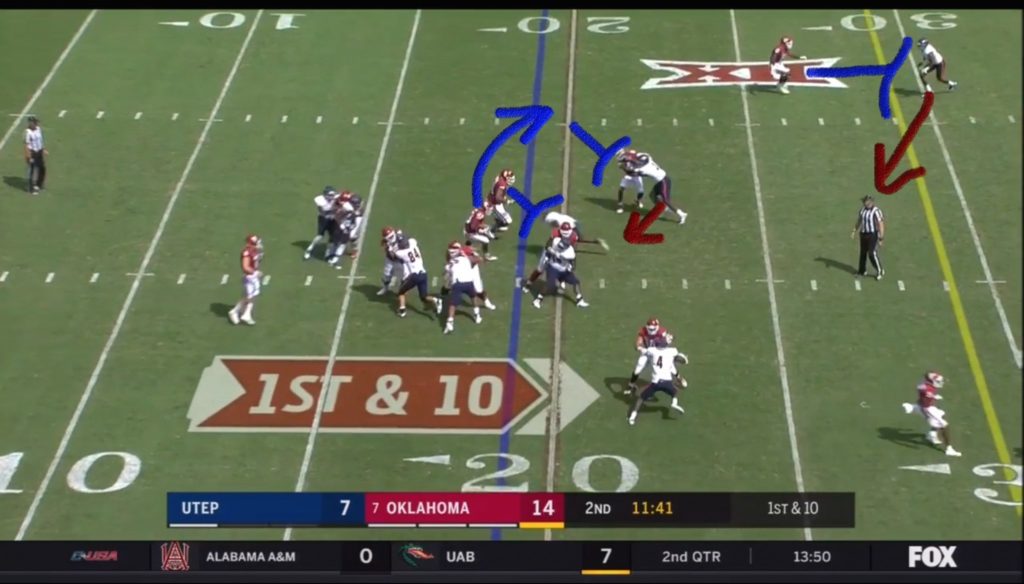 Great protection on the physical catch to CeeDee Lamb.  Just good to see no major busts up front in the first game of the year. 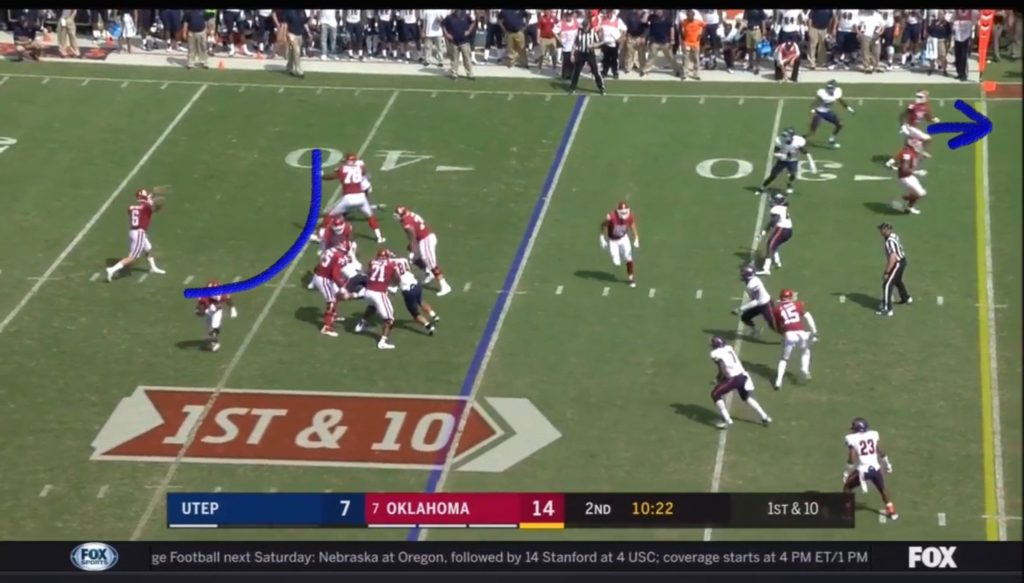 Also good to see a big time WR recruit be just that.  Lamb climbed the ladder to make a high point catch in spite of contact in traffic.  Kid is the real deal.  We could be getting ready to enter a WR renaissance with all of the talented wideouts who want to play for Riley in this offense.  Great job by Lamb. 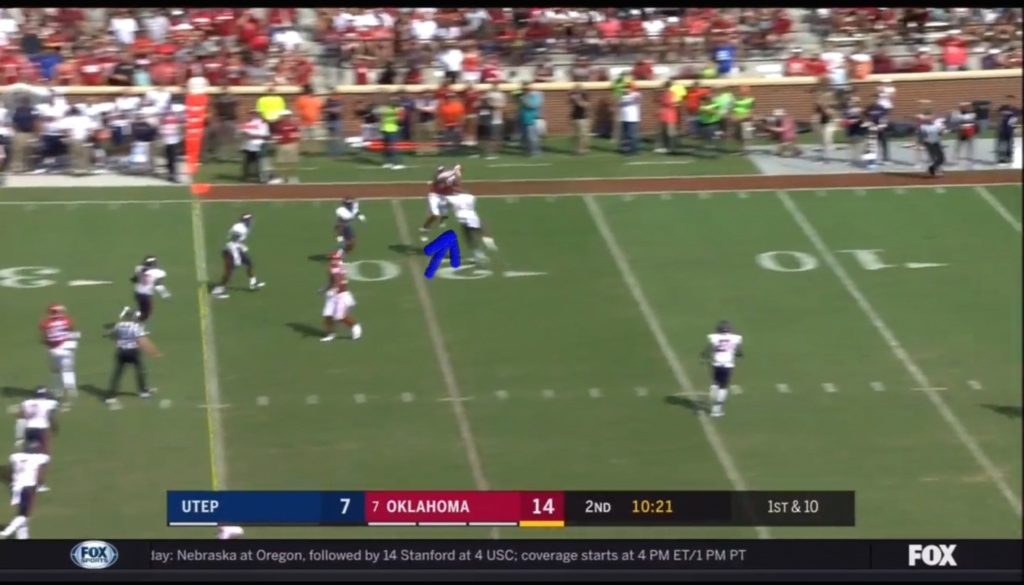 Speaking of big time recruits and high point catches, here’s a young stud TE Grant Calcaterra making a big time play.  No doubt the Sooners will have the bulletin board material up this week since Herbstreit said what he said about them.  Catches like this will be needed against a talented Buckeye secondary.  When Baker recognized man coverage, he actually checked to this play.  Shows a ton of confidence in his Freshman tight end. 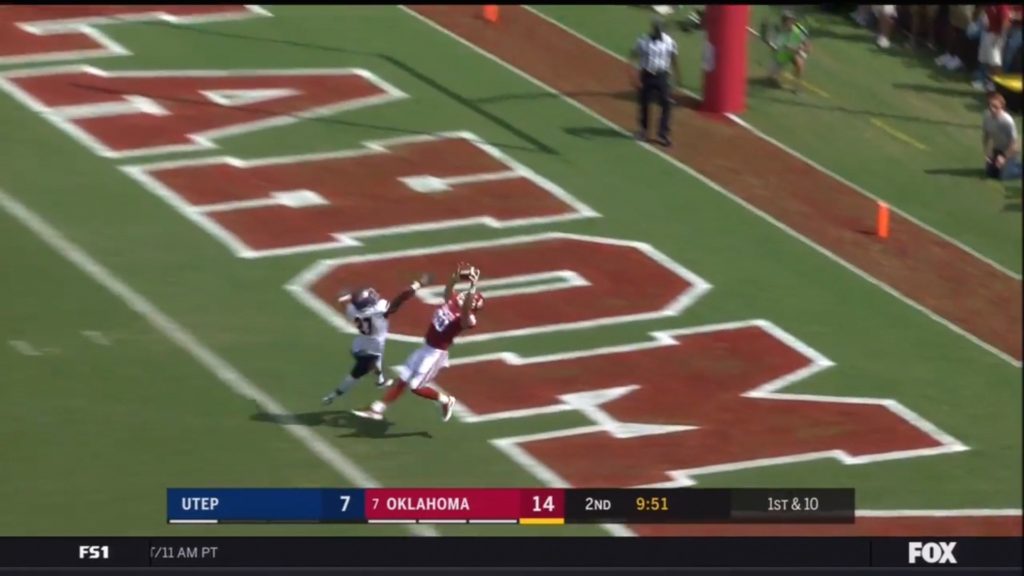 Here’s the beauty of the play action game.   The LB has to be accountable for both the run game and Mark Andrews.  A lot of play action down by the goal line is protecting long enough for it to work, which the Sooners can do, and also having your TE sell it and release late. This causes the LB to read run, forget about the tight end, and leave the receiver wide open. 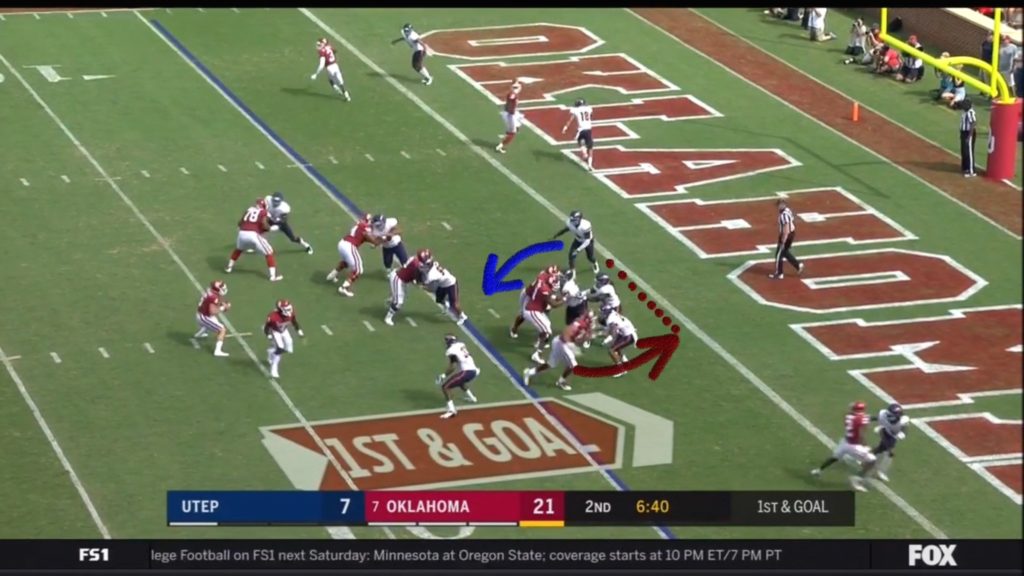 This is the end result. 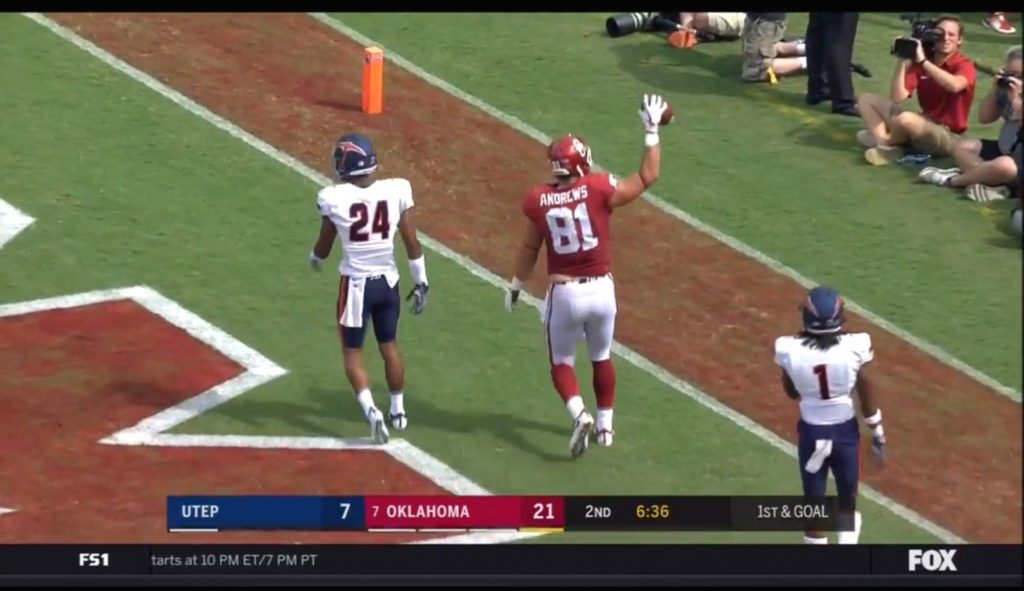 This is a huge sell by Flowers and Baker.  Looking at each other causes all three defenders to get sucked up.  It gives space to Lamb dragging across the back of the end zone.  Andrews just stops his route as to not get called for the pick play.  As teams have to figure out how to defend this, it wouldn’t shock me to see Andrews standing all alone up in the top corner of the end zone to give Baker a last minute read if everything is covered.  You can tell Riley teaches the little things very well. 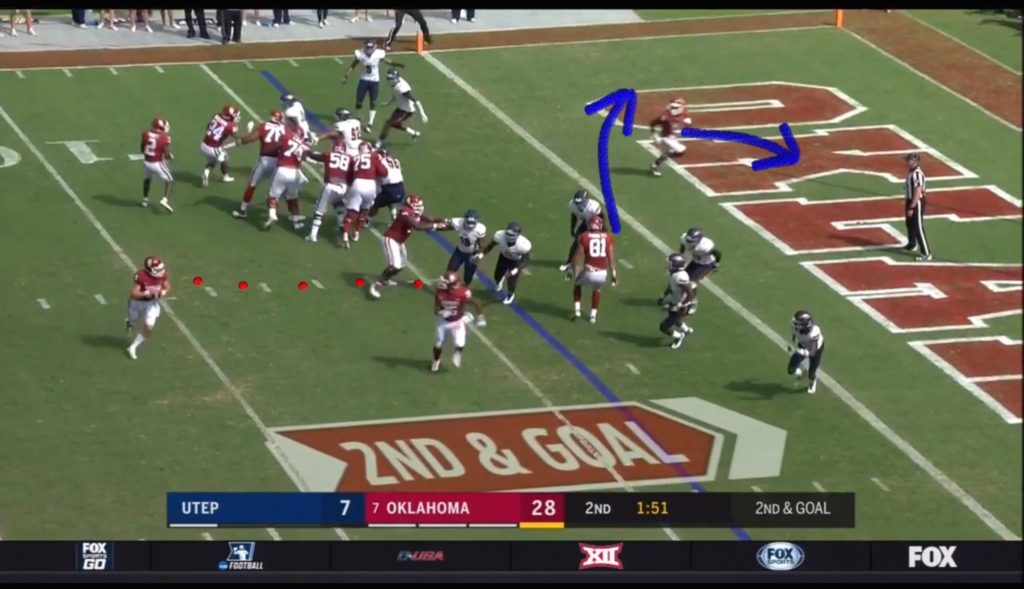 Small things the Sooners can clean up will yield big plays.  Badet showed crazy speed on this play, but the Sooners blocked it wrong.  Carson Meier needs to get down on #45 and allow the back to get out and lead on #7.  The guy notated in green ain’t catching Badet, so you can leave him unblocked.  If 7 pushes to the sideline and Carson slams his guy down inside, Badet walks in the endzone. 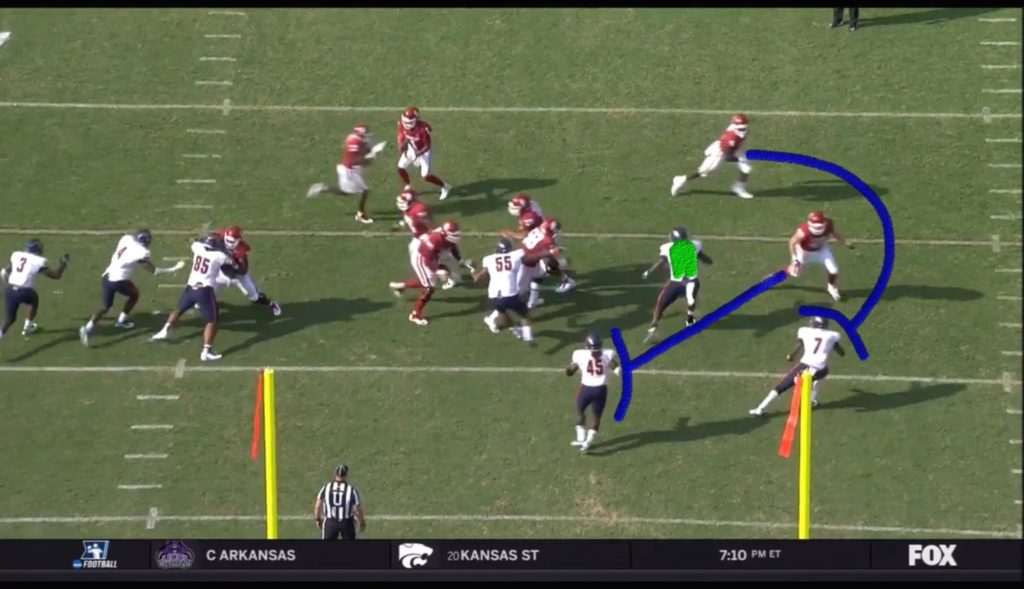 Since Meier goes out on 7, it causes Badet to slow down instead of just using his speed to get up the stripe into the endzone. 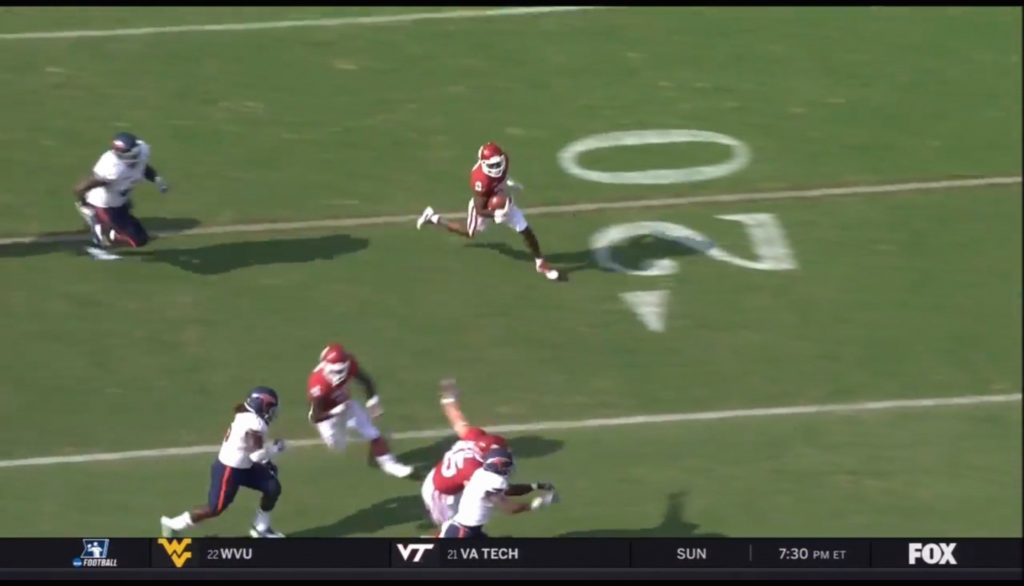 Finally, the blue path is where Badet could have been as we clean these little things up.  Still though, it was filthy speed and stop start on the play by Badet which almost scored. 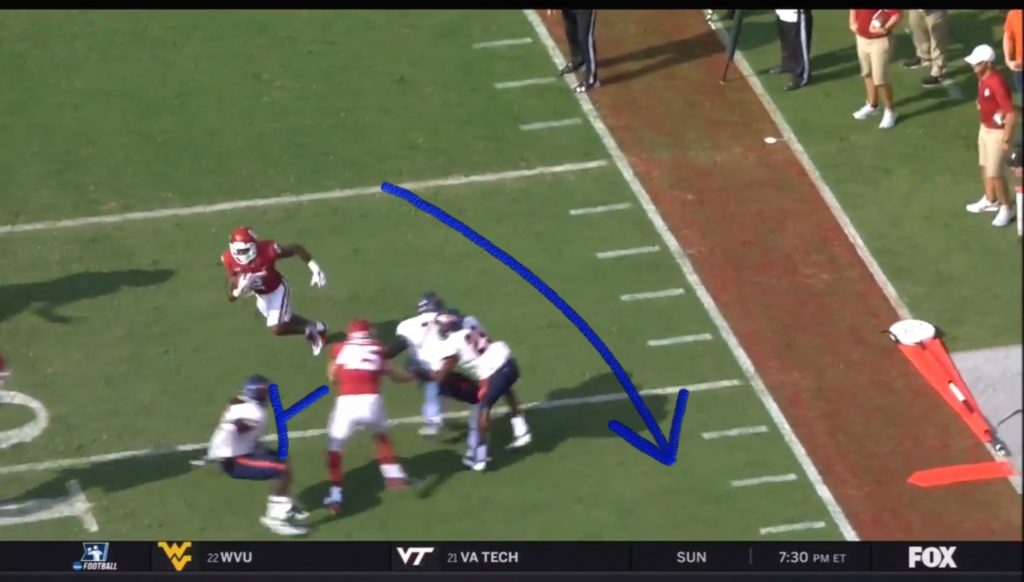 This is particularly exciting.  Meier comes back and is Cash Money driving the defender into the endzone.  We haven’t had tight end versatility like this in years.  A power blocker in Meier, dynamic receiving targets in Andrews & Calcaterra, and an x factor in Flowers.  Reminds me of Gresham and Eldridge.  But back to this…this was awesome. 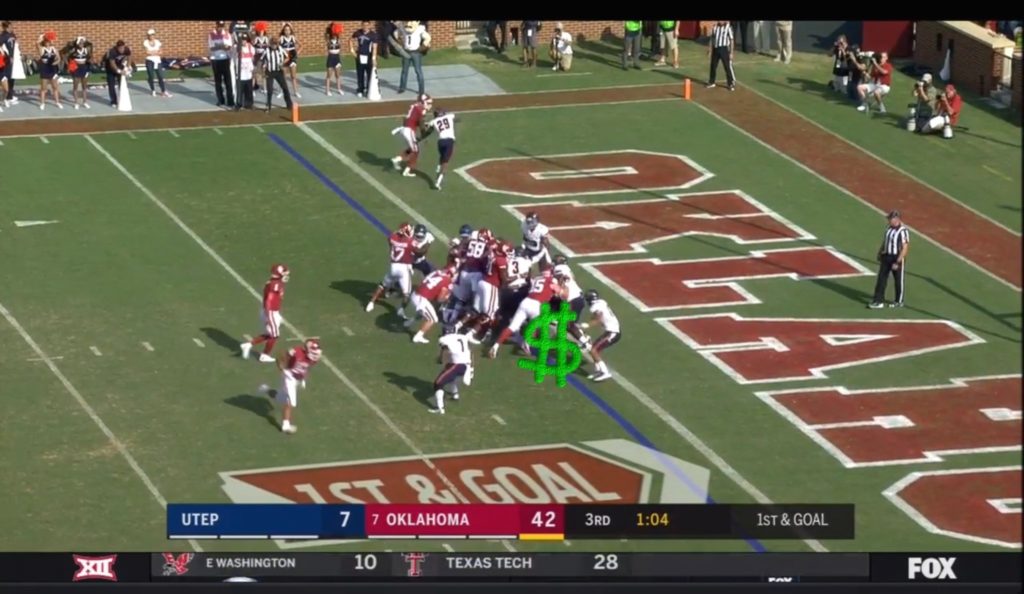 Super K tweeted about Carson introducing this guy to God’s green earth, and that’s exactly what the bull tight end did.  Doing this on the goal line isn’t easy, no matter who you’re playing. 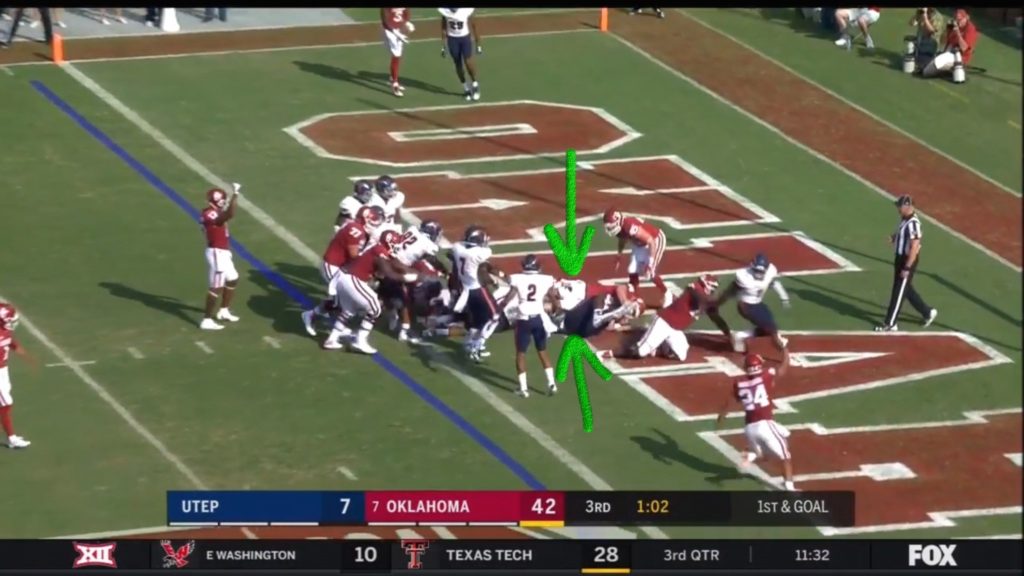 This is kind of turning into the Carson Meier show, but the guy was great on these two plays.  See how his blue path and his eyes are working inside out on the swing pass. 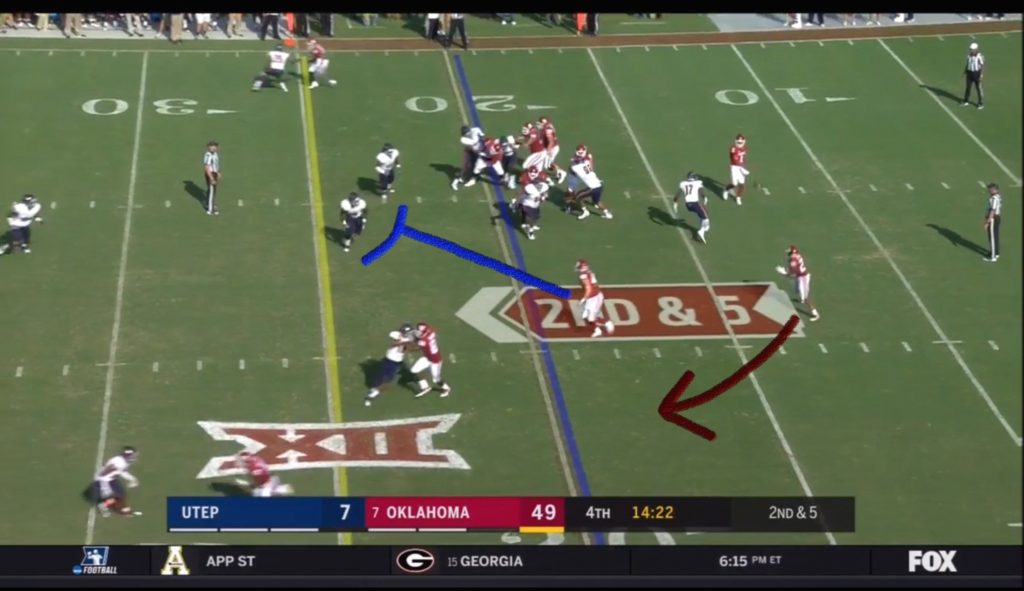 It’s a simple thing, but because he stays square to the play, he’s able to shuffle laterally and keep that defender from getting inside out on Sutton.  I’d like to see Tease get his hips inside and allow Marcelias to turn on the jets. 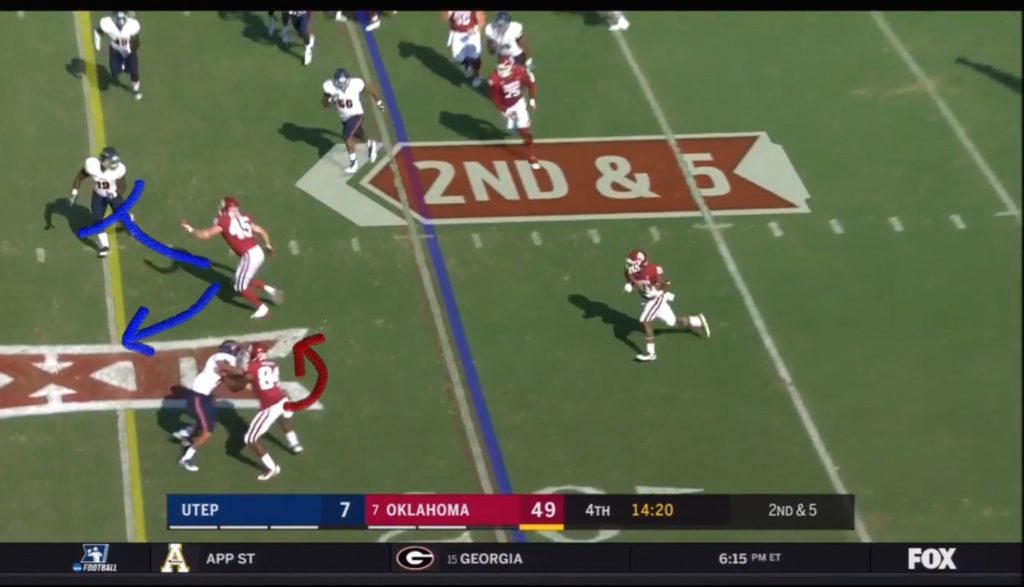 Finally, hats off to Bedenbaugh.  No matter who’s in the game, they perform.  Roberson, Samia, Mittermeier, Swenson, and Julius were in there late and we continued to see the Sooners move the ball.  Good protection here allowing Schaefer to get a good pass off.  I’ll touch more on it in another post this week, but I have a good feeling about this weekend in Columbus. 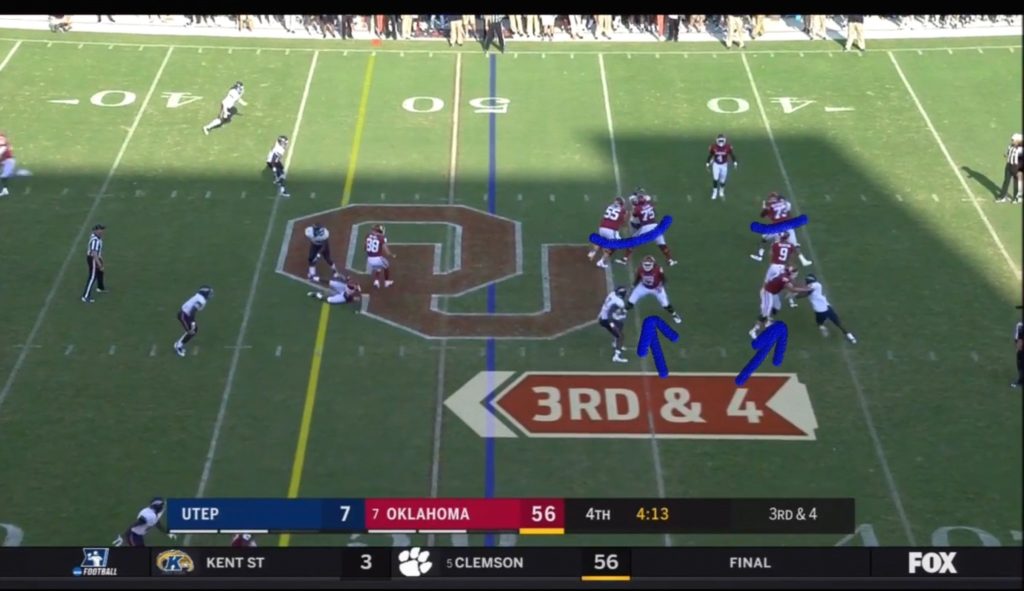