Why the Trench Trifecta this week?  Well first I really like it when the Sooners win, so it’s easier to do these(They suck when we lose).  Second, it was the 3rd Big XII title in a row, so naturally I had to go big.  The majority of this final one is defense, which I know some of you like.  I’ll start digging into Georgia this weekend and hope to have a few posts up next week on what they do.

I think this play below was the play of the game.  Down 14, had TCU been able to convert here and go score, 31-24 is a lot different than 31-17.  This was a backbreaker, because two plays later, the Sooners went downtown to Hollywood Brown to put it at 38-17. 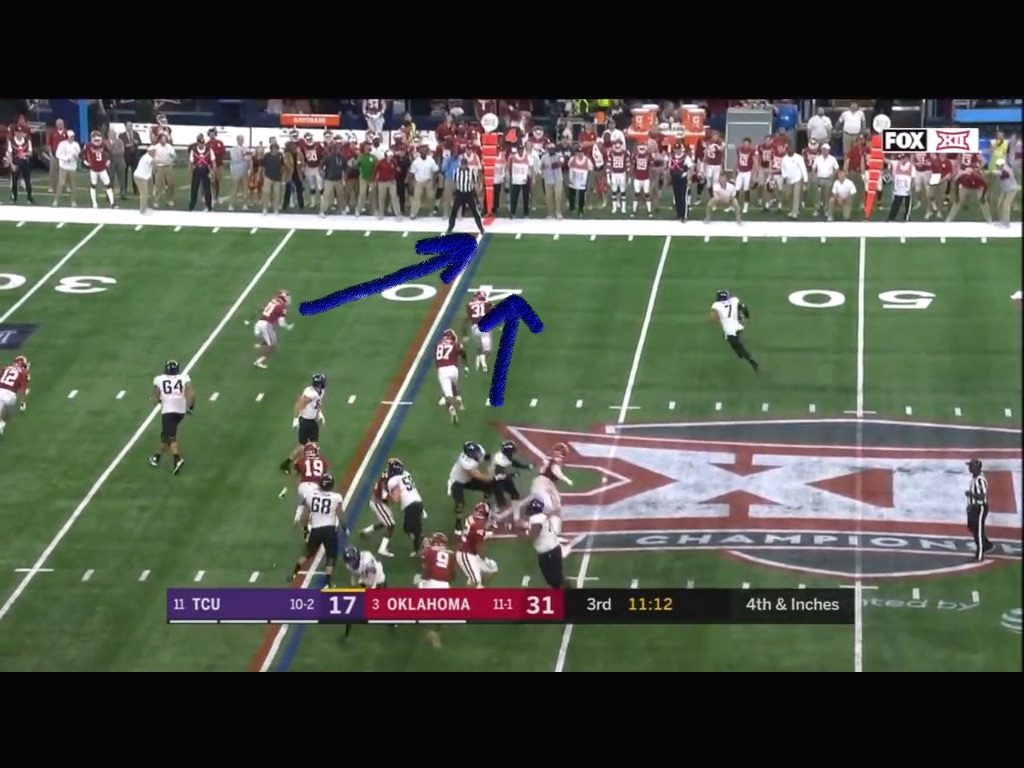 I was surprised that this didn’t get reviewed, but in these next couple of shots you’ll see why.  The blue line is the line of scrimmage, and when you see where the ball is when Hill goes out of bounds, he didn’t make it back to the original line.  As he went out of bounds, the ball is in his right hand, right above Obo’s head. 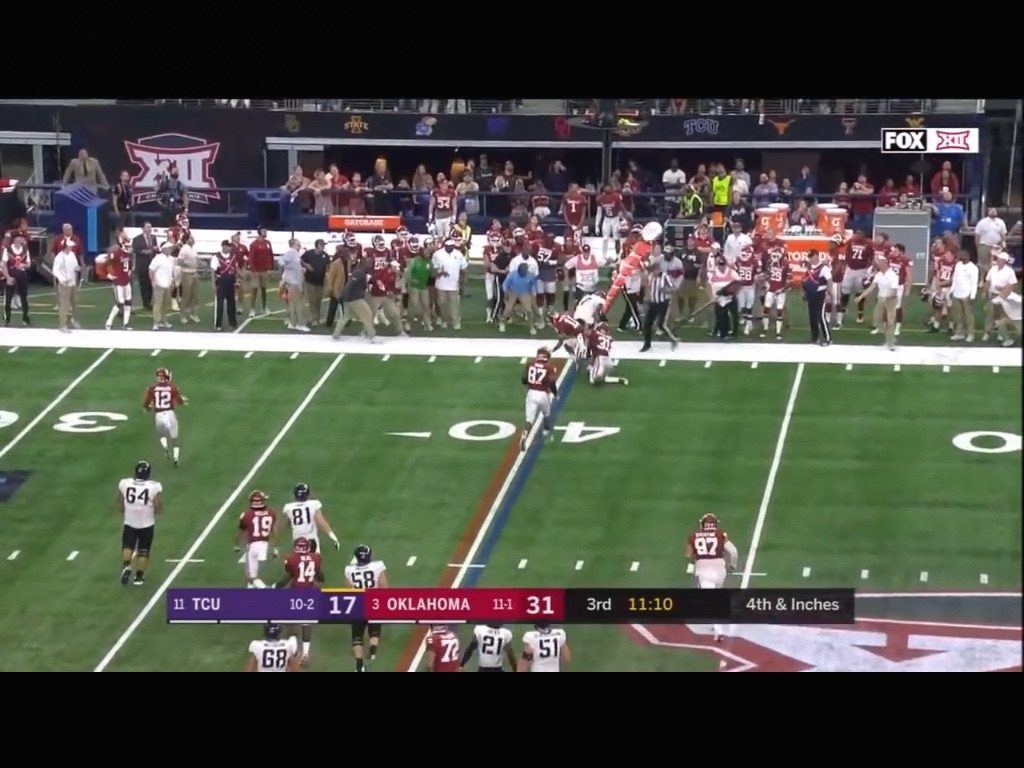 You may be able to see why it was such an easy call for the official with this shot a little better.  After a big hit by Motley on a much bigger player, Hill goes out well short of the 1st down.  His right foot is on the chalk, and there was literally nowhere for him to go.  It seemed like the Sooners had answers for almost everything TCU tried to do Saturday. 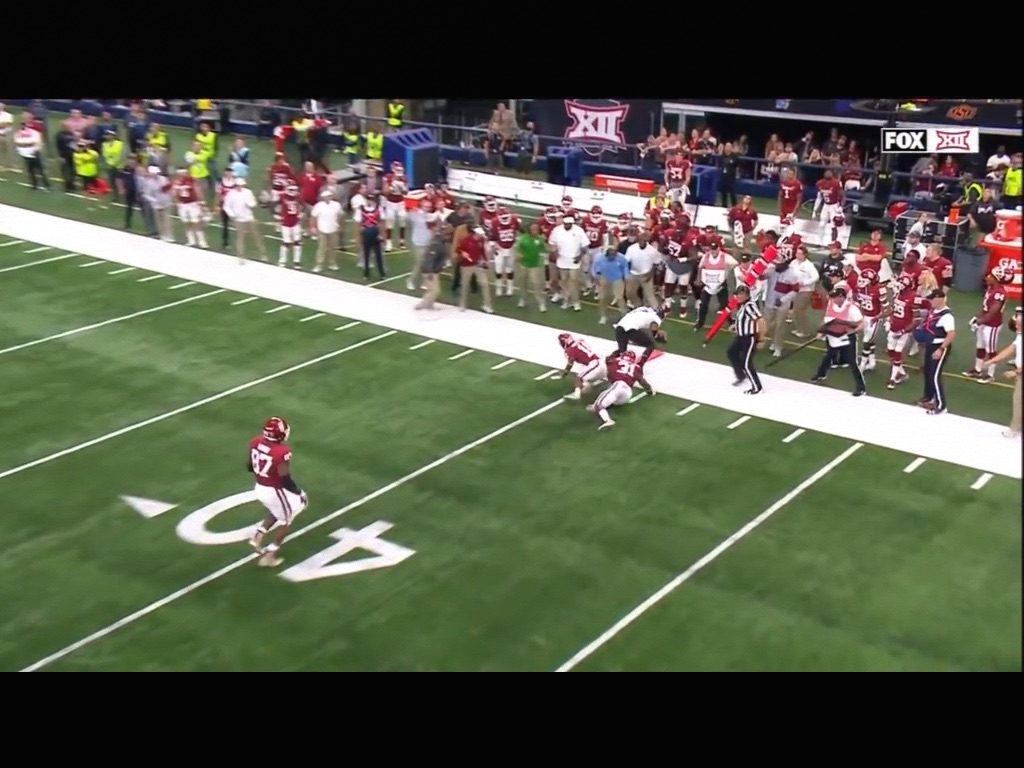 This came two plays after the 4th down stop.  It reminds me so much of the play from Trevor Knight to Jalen Saunders in the Sugar Bowl against Alabama two years ago.  While Jalen was much more elusive than Marquise, from a top end speed standpoint, I don’t know if the Sooners have had a faster receiver in recent memory.  This was the dagger. 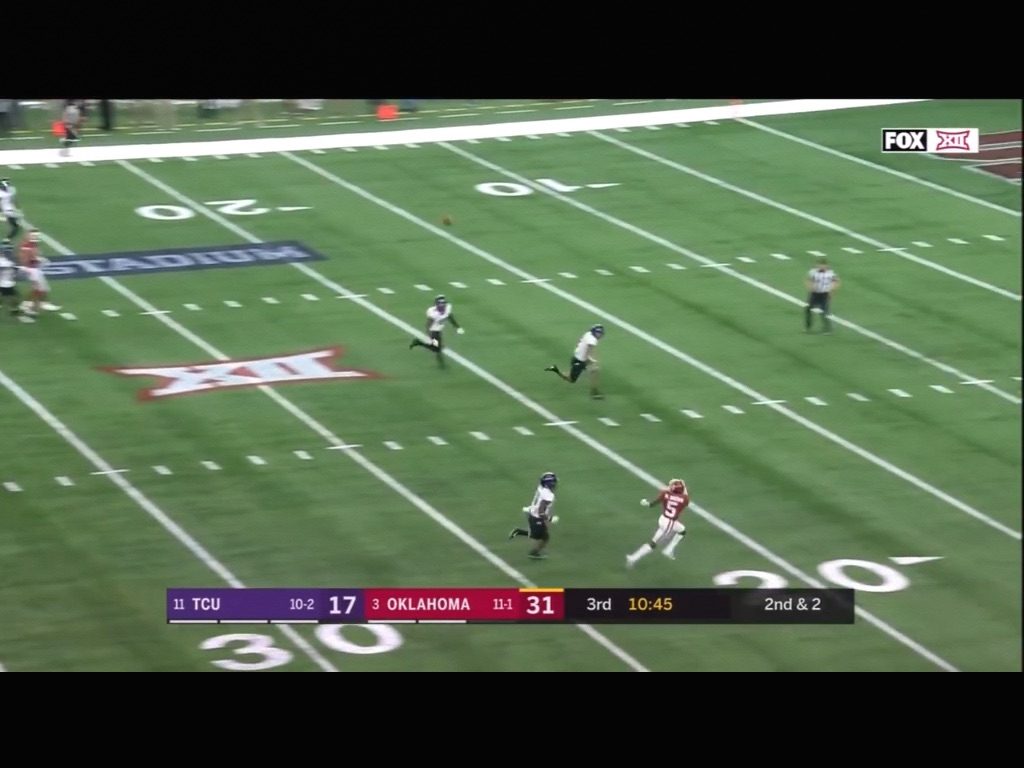 I still don’t know how Erick got over to the sideline to celebrate so fast.  I had to rewind the tape a few times to see if he was in on the snap and sure enough he was.  Need to get off that bench big dog.  We need you for the playoffs and can’t have you gettin hurt. 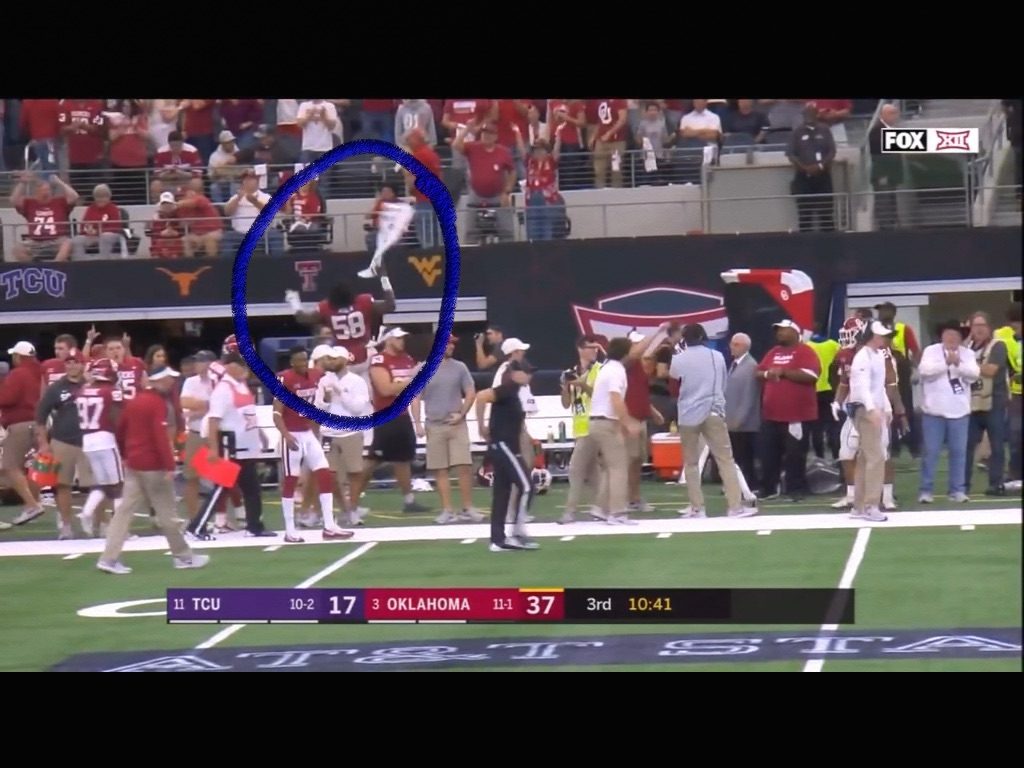 “Setting the edge” is a term you hear a lot.  What that means is that you don’t let anyone get outside of you, and you try to push the blocker on the end of the line back into the backfield.  What can’t be understated here is how well the three down defensive linemen are playing.  The purpose of a 3-4 is to have the defensive line occupy the linemen, so that your linebackers can run free.  Both of the outside guys in Kelly and Obo are setting the edge while Murray and Beal are running free. 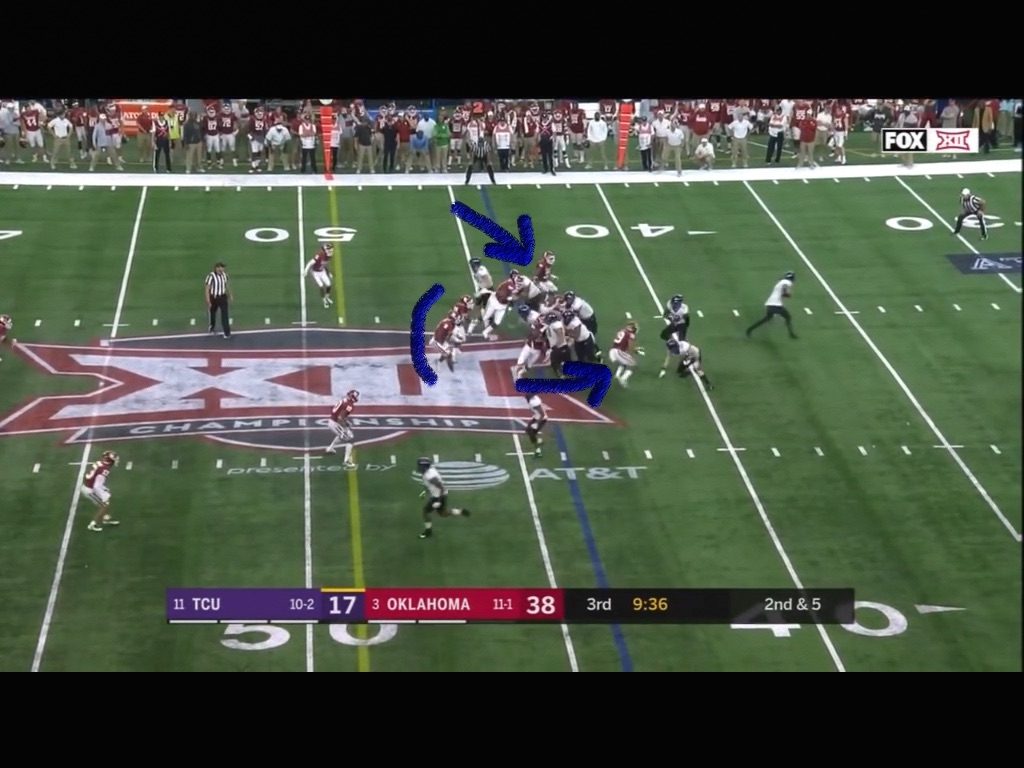 As the guard comes off of the combo a little too quick to get up to the lb’s Overton comes free and makes a big tackle for loss.  Kelly is the “force” player here who is preventing the cutback like Obo on on the backside and “forcing” the ballcarrier to go up into the middle of the line of scrimmage. 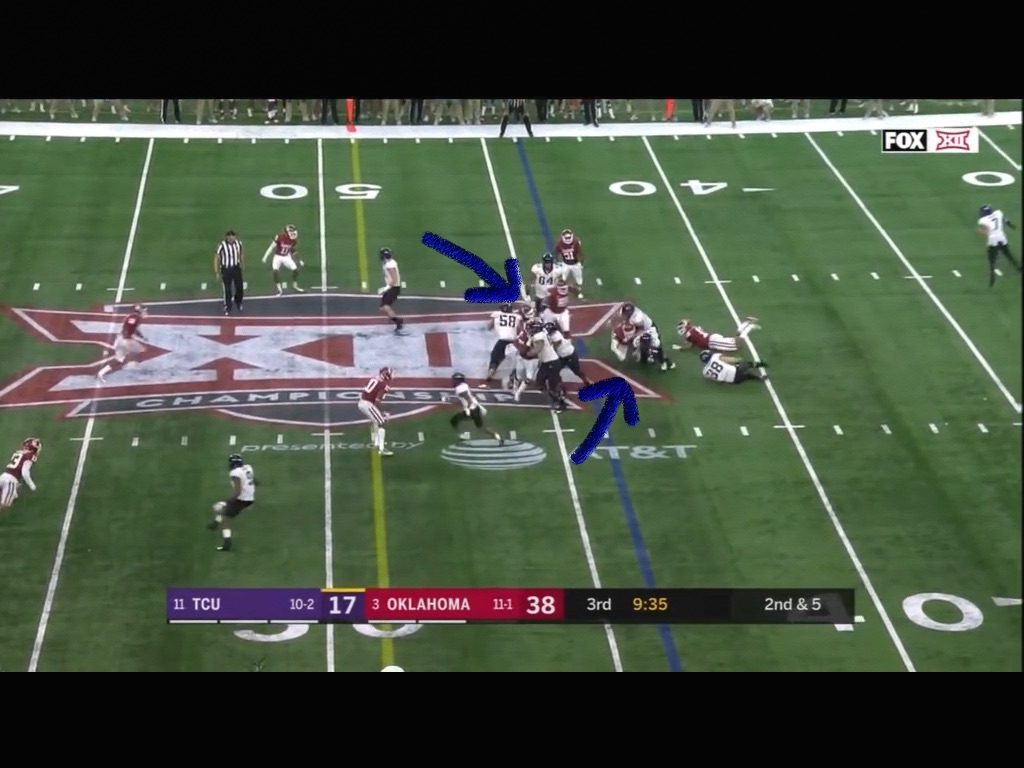 After that last play of 2nd and 5, the Frogs were faced with a 3rd and 6.  The tape early on in the season had Oklahoma more vulnerable to the run.  A guy who has been playing really really well lately is Kenneth Mann.  His quickness really showed strong here.  He’s “slow playing” this technique.  That’s hard for a 3-4 de to do.  Normally you see this from a linebacker or a 4-3 defensive end, not a 3-4 guy.  He keeps his shoulders square to the line of scrimmage but turns slightly inside.  Kenny pulls the ball thinking that Mann is crashing to the back. 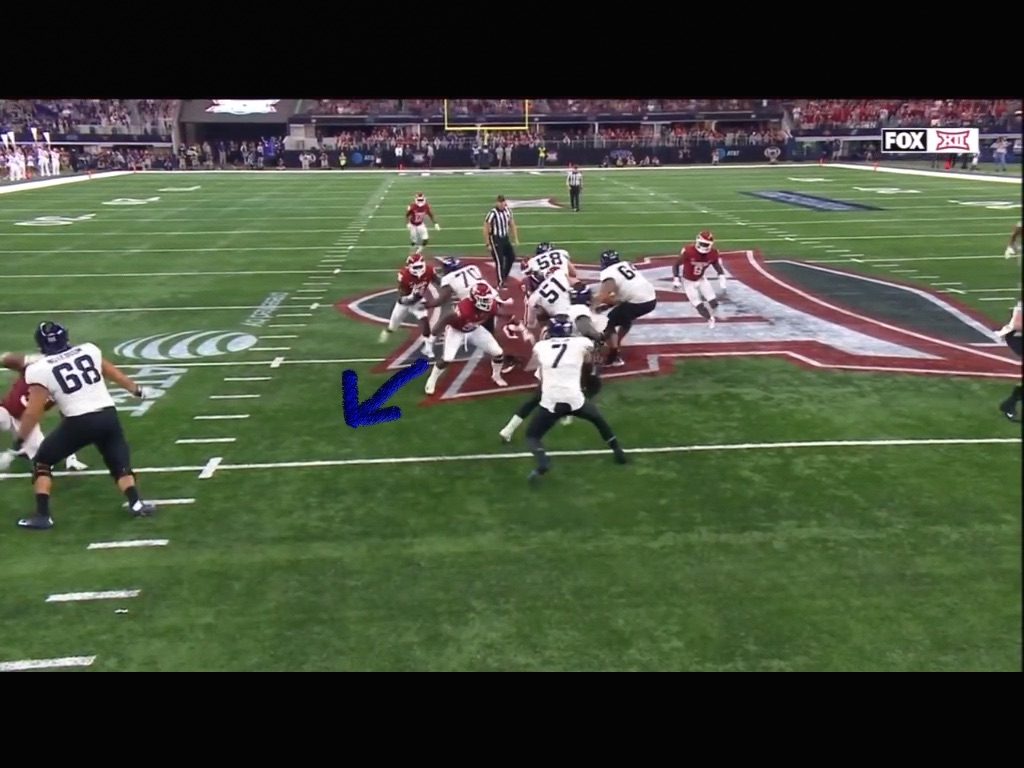 He was wrong.  Kenneth exploded out of there and was on top of Hill in a hurry.  This was a truly impressive play by the young d lineman.  I know that everyone likes to tout SEC speed, but this Sooner defense is one of the fastest in the front 7 that we’ve seen in a while.  Beal and Obo were there too in case Hill got away. 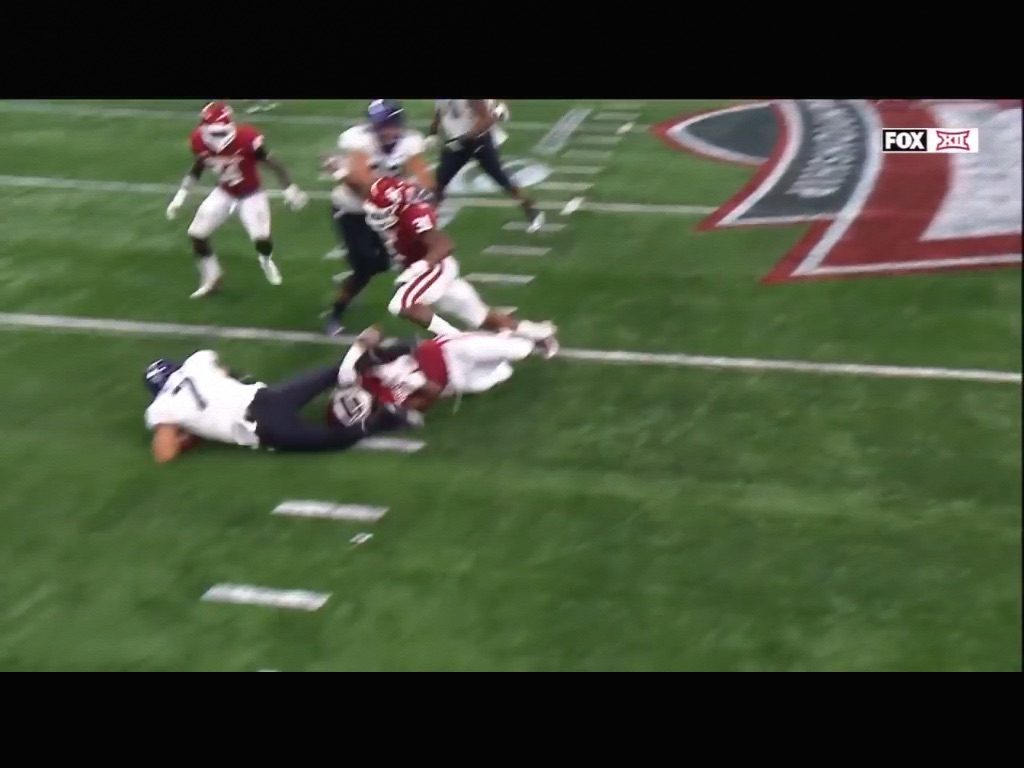 This was a heck of an effort and a heck of a play by Jordan Thomas.  After everything he’s been through, staying engaged and giving great effort speaks a lot to his character.  He was the 1st guy that Baker hugged after the final second ticked off.  He looked genuinely happy.  It’s good to see him getting things sorted out. 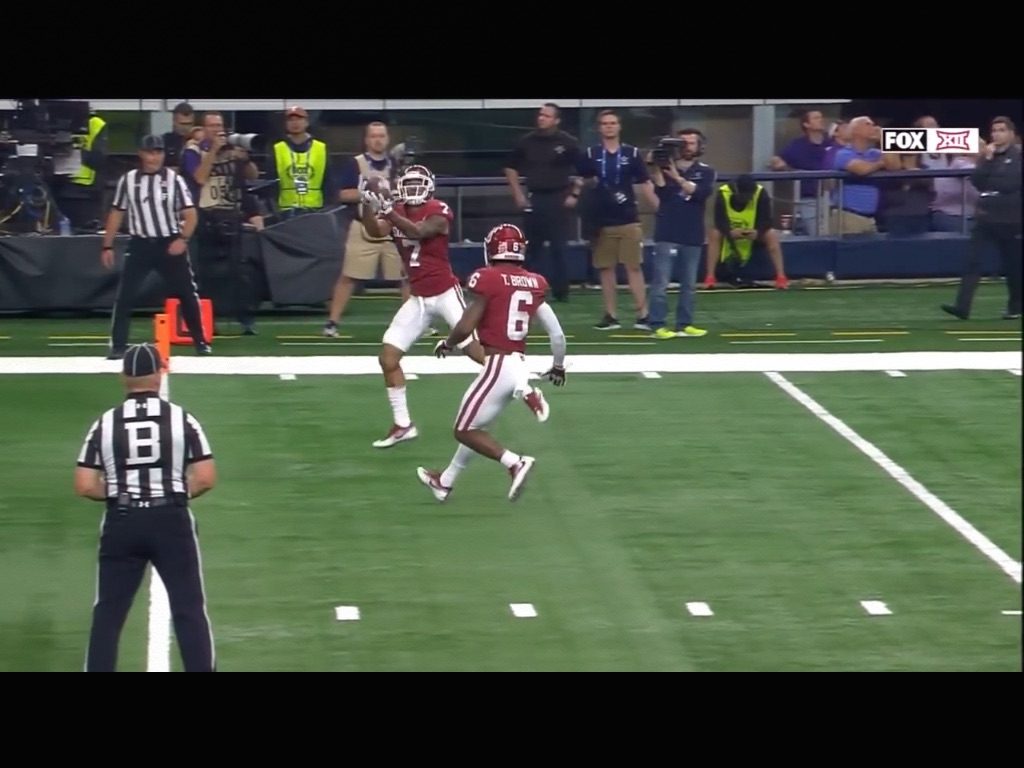 This may go down as one of the more complete games the guys played all year.  Outside of the two big circus catches and a missed fieldgoal, there weren’t a whole lot of plays that didn’t go the Sooners’ way. 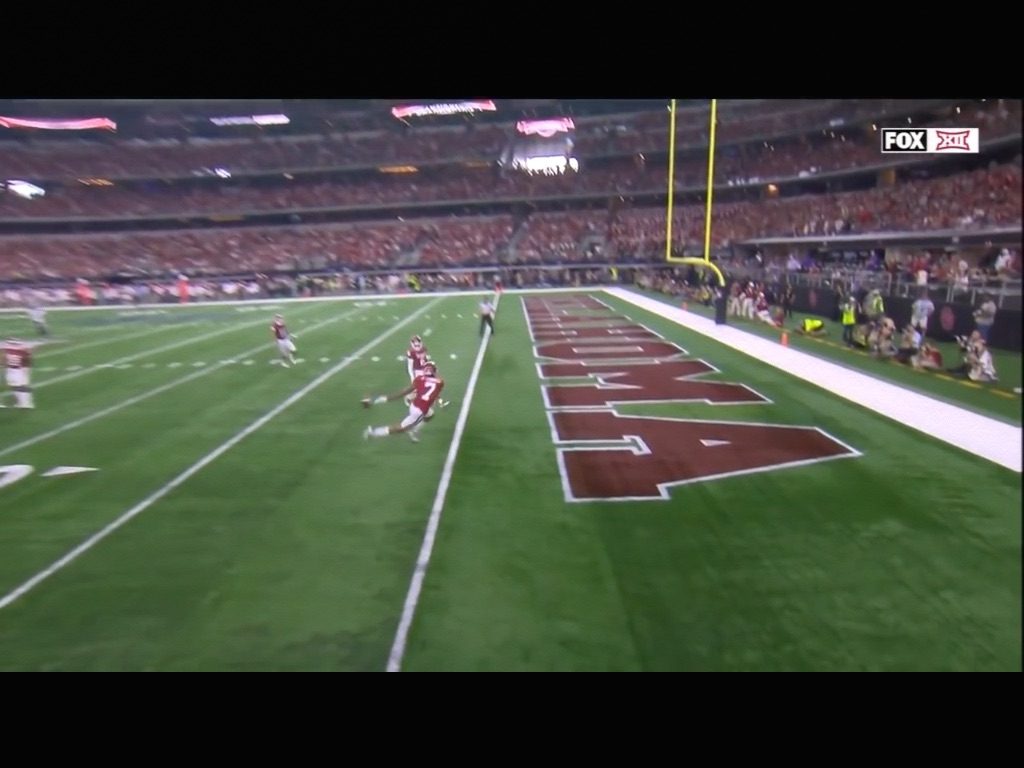 Coming off of the goal line on 1st down out of this formation, play action relly isn’t a bad call.  This is how the Sooners can line up and be multiple.  With the 4 linebackers there’s speed all over the field.  Putting Kelly to the wide side, the “field side” and Obo to the “boundary side” makes it really difficult for teams to flank the Sooners. 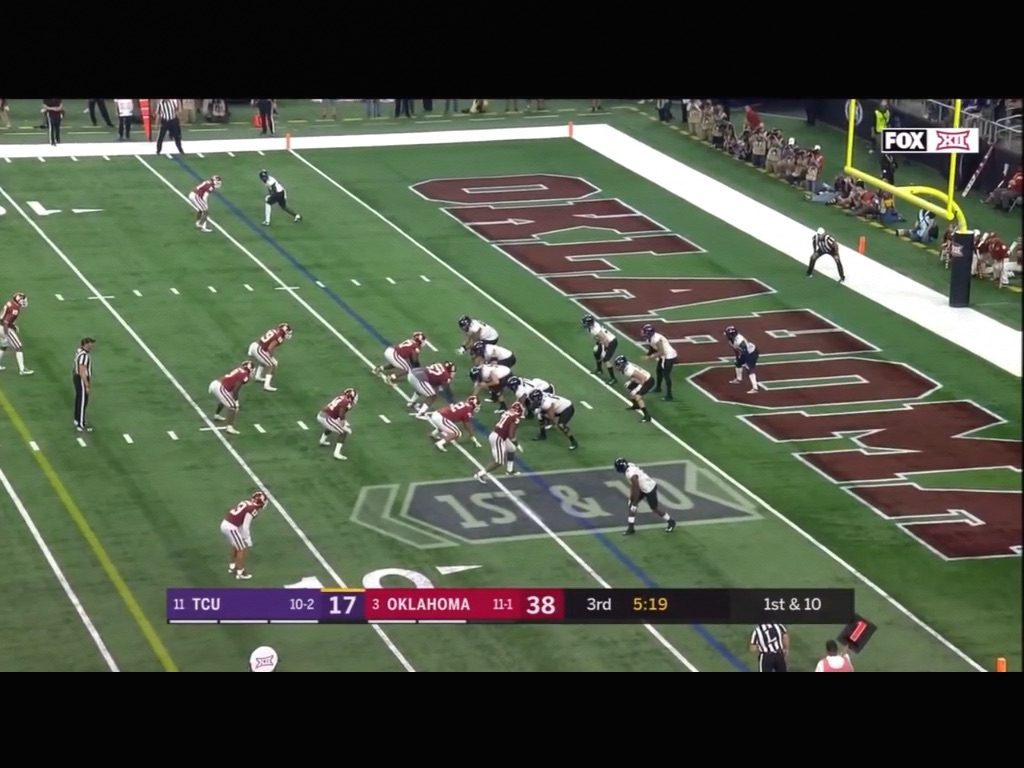 If the 4th down stop was the biggest play of the game, this may have been the nail in the coffin.  Going back to Alabama a few years ago this looked like Julian Wilson’s pick against the Tide.  Will Johnson played a heck of a game, and since he’s gotten healthy again has been huge for the Sooners’ secondary. 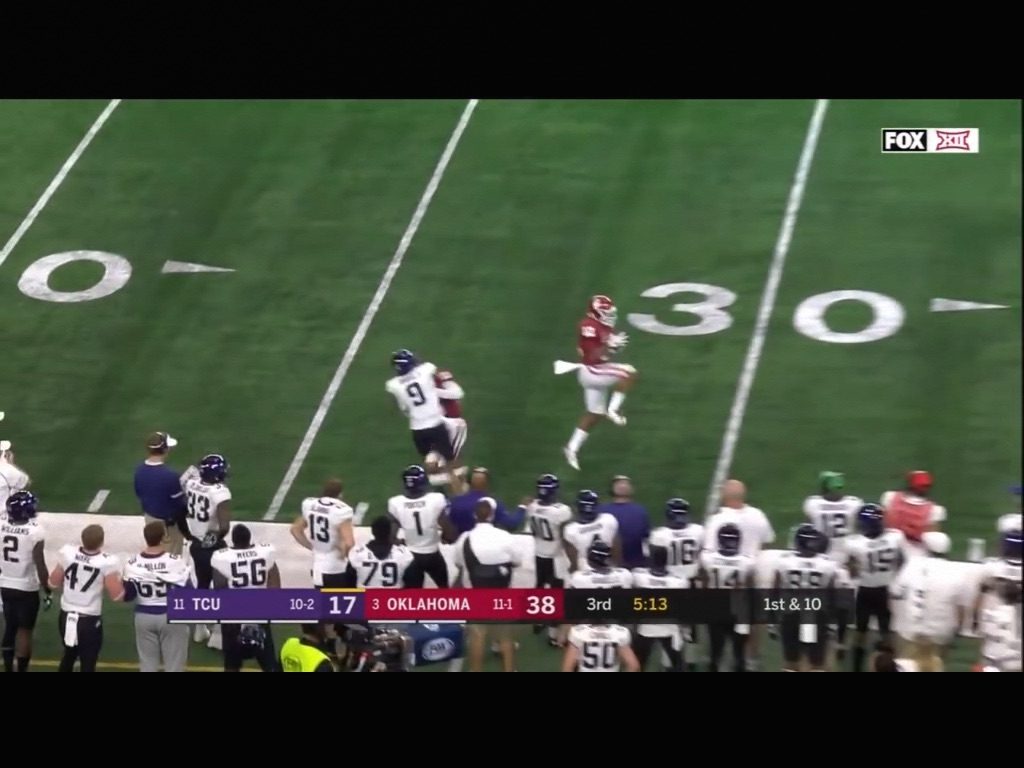 I thought that he could have cut this back and maybe scored.  Steven Parker is in the middle of the field by the “XII” emblem, and had Will cut inside I think that he gets paydirt. 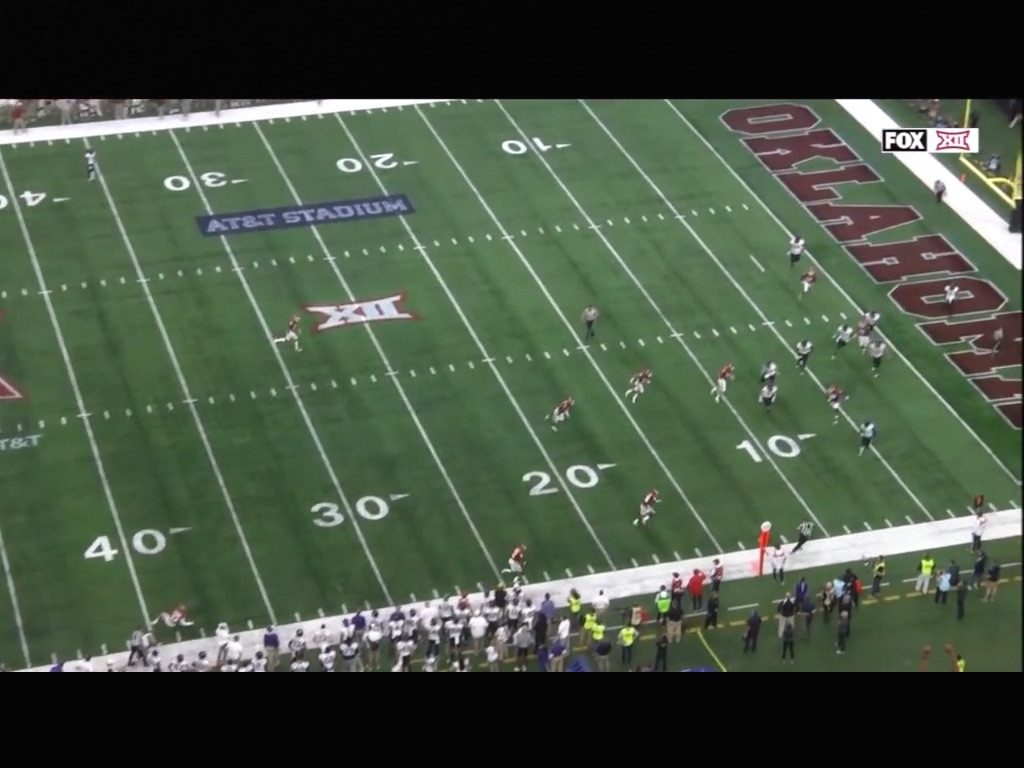 In hindsight this is really a smart play.  Up 38-17, and given that you’ve had some injuries this year it’s probably wise to step out and give the ball to your video game offense.  Look at big Lampkin! Don’t let coach B see this.  Looks like  a big ol’ guard to me. 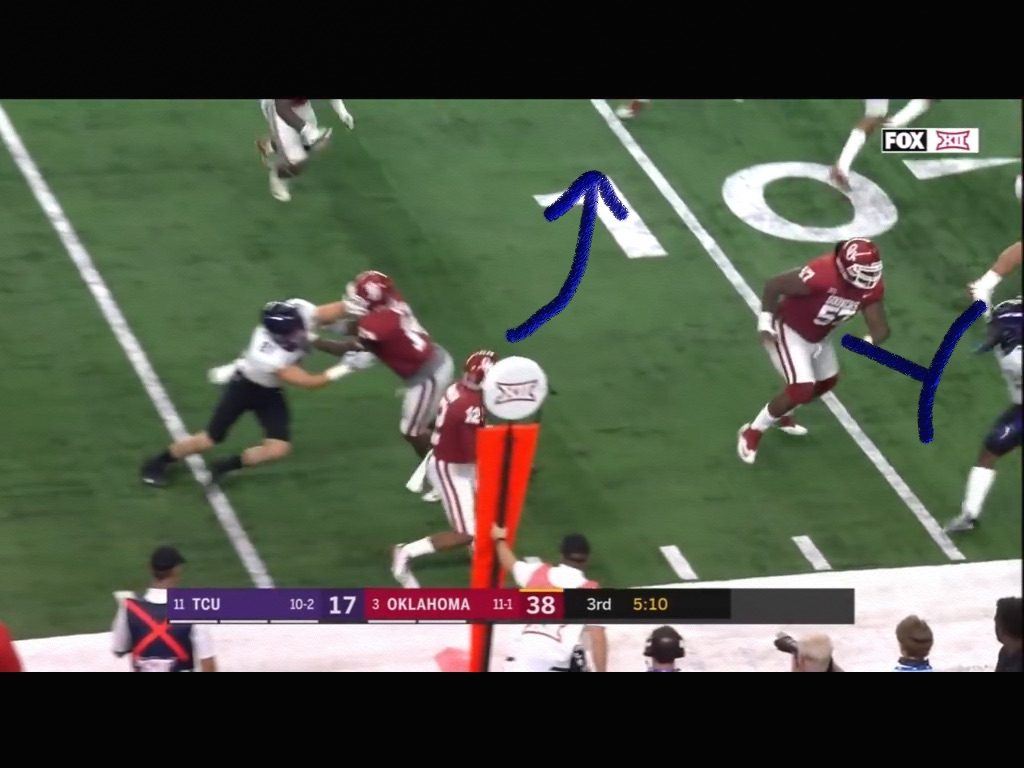 The look on Patterson’s face says it all.  It’s like Red’s dad on the movie Friday after Debo knocks Red out.  “Get your ace in this car boy!  I don’t know why you gotta come down here messin with these people!” 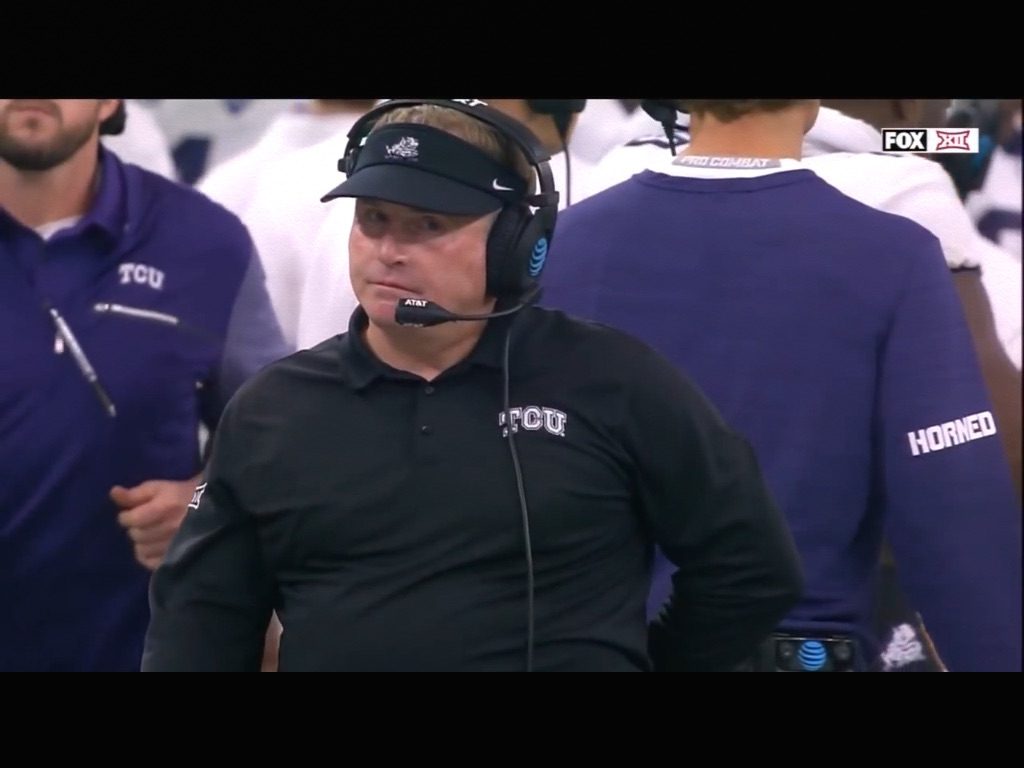 TCU couldn’t run over, under, around or through the Sooners.  After halftime the Sooners went straight on lockdown and completely shut down the Frogs.  Beal was alllll over the place Saturday.  When you have an inside linebacker who can run with a speedster like White, stuff like this doesn’t work. 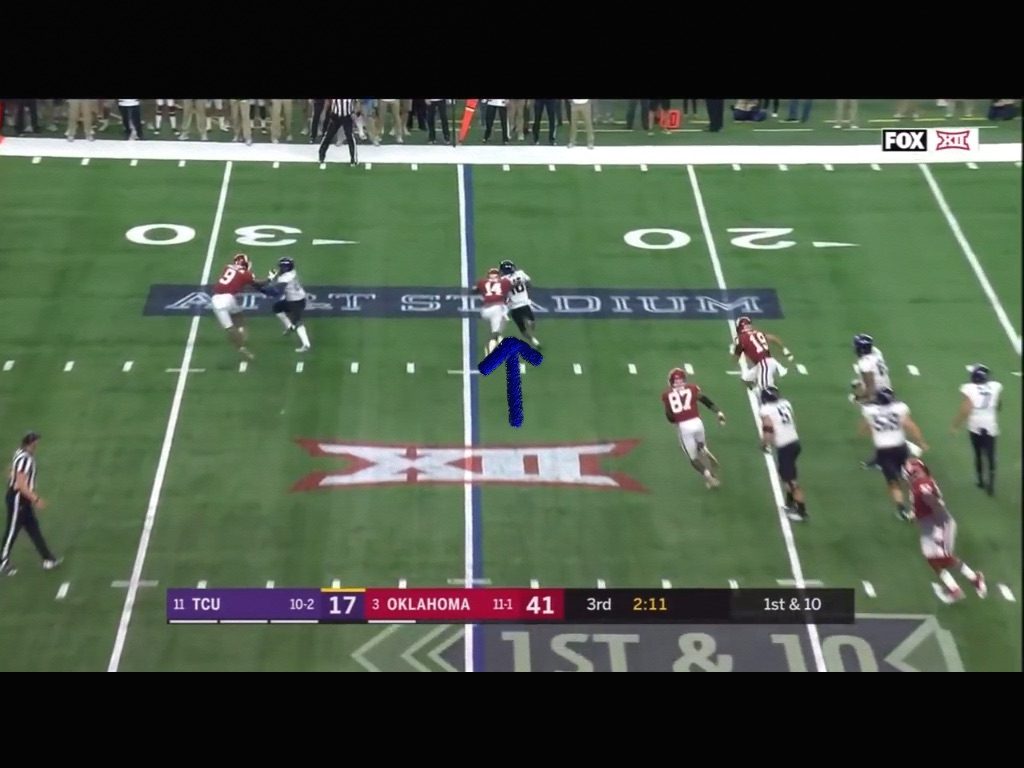 There’s Beal again coming from the bottom after Motley flew up to set the edge.  This is a 2nd and 10, and the Sooners dropped em for a 3 yard loss.  The guys were absolutely swarming defensively. 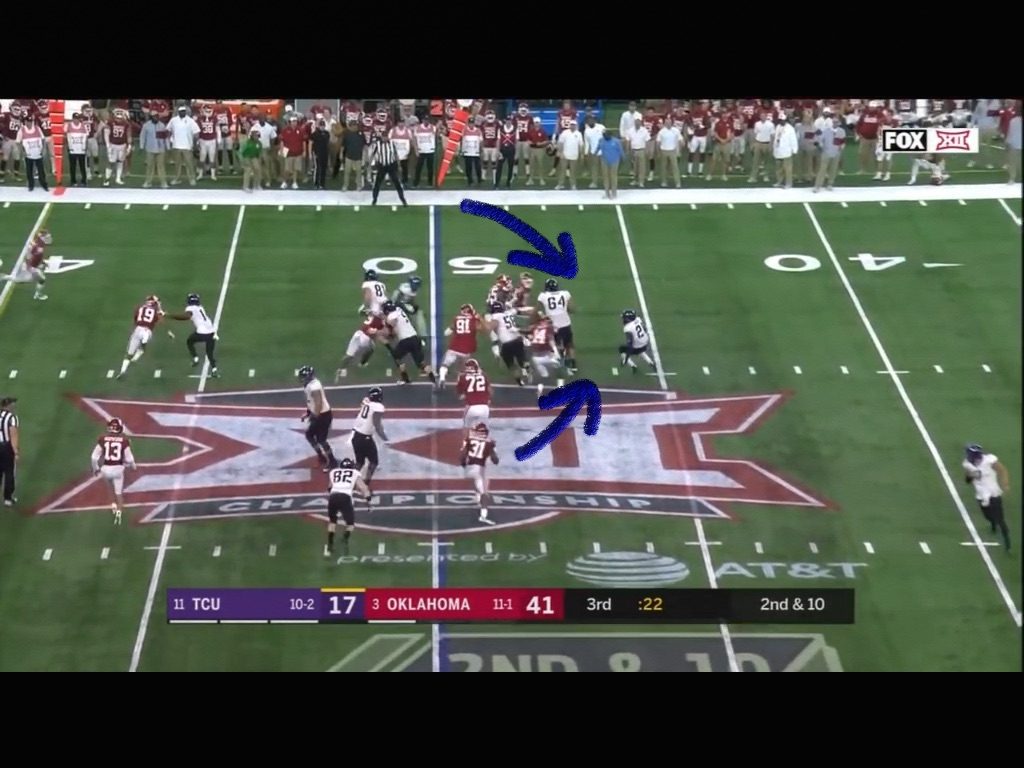 That blur you see is Neville Gallimore running up to decapitate the ballcarrier.  Great effort to get back in the screen by the big Canadian.  Will Johnson forced this play by undercutting and getting unblocked .  Whatever the Frogs tried to do the guys had an answer for. 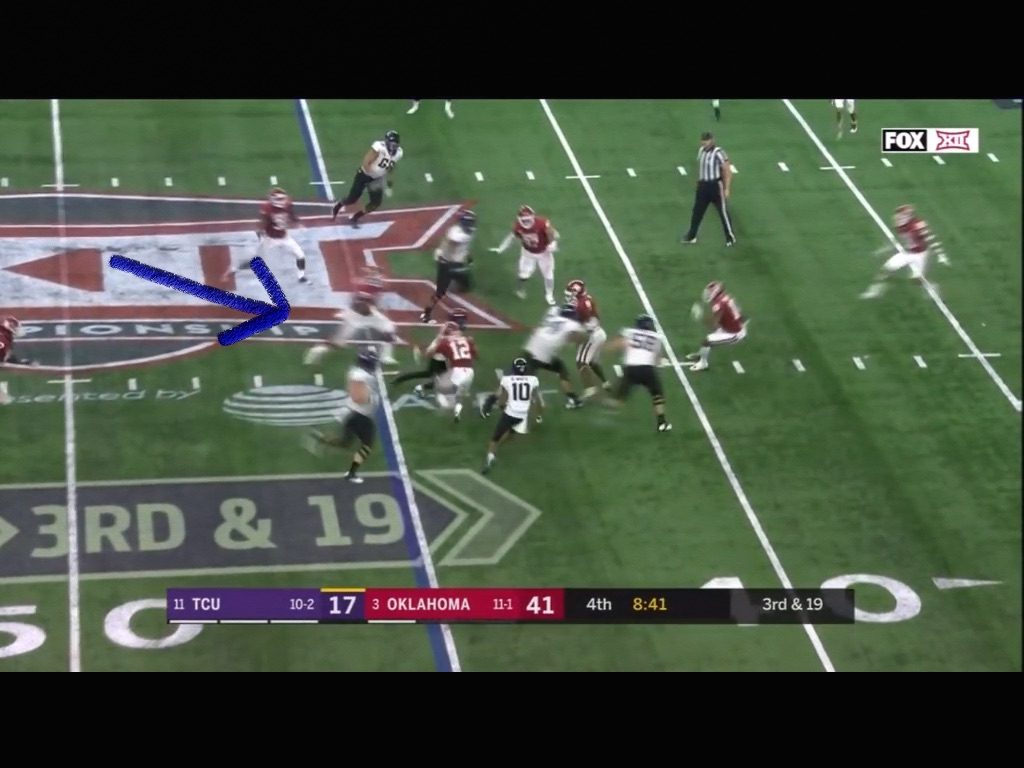 After Rodney Anderson carried 24 times, the Sooners went with the two back set and turned to the true freshman Trey Sermon.  The Sooners could have run the score way up, but went with the run game for most of the 2nd half.  Something Bedenbaugh has greatly improved is comboing up to the 2nd level and locating linebackers.  In years past before he got here, it was so frustrating watching our line not be fundamentally sound.  Now that’s not the case. 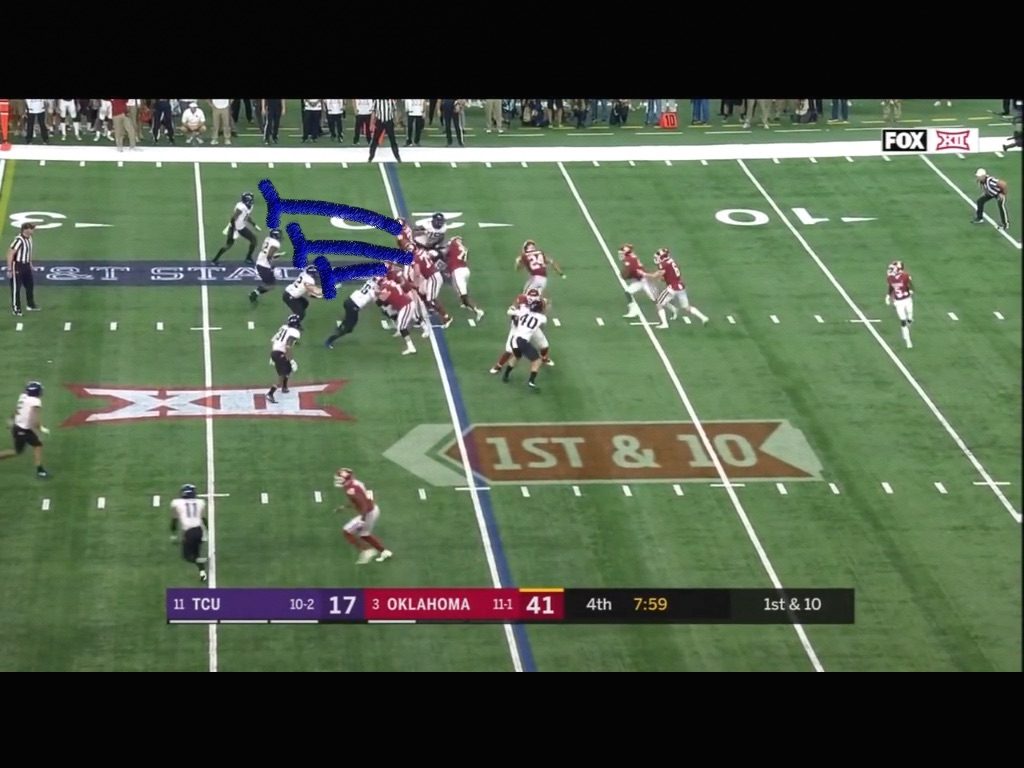 A second later, you can see how well the guys got up to that 2nd level.  The hole is right behind Samia and in between him and Big Ben Powers.  For a guy like Sermon to come in after the defense is worn out is a heck of a change of pace.  While a lot of people don’t like the running back by platoon strategy, it really helps you keep guys healthy and have plenty of tread on the tires going late into the season. 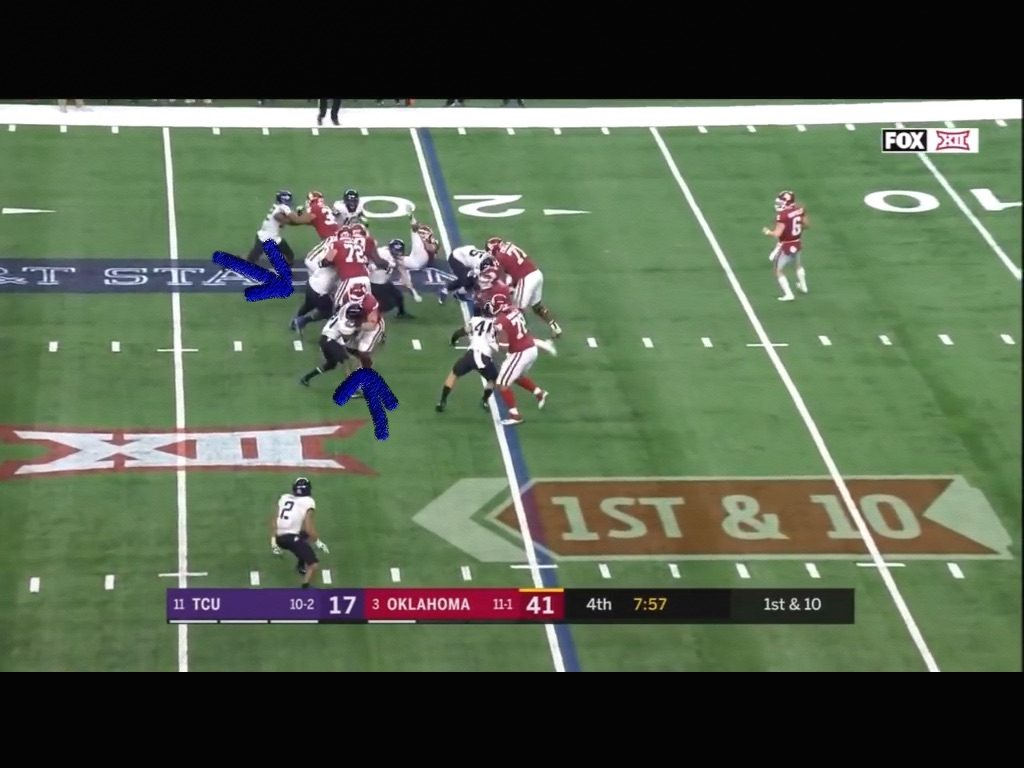 This is a 3rd and 4 play, and not enough can be said about being able to run the ball when the defense absolutely knows what you’re going to do. 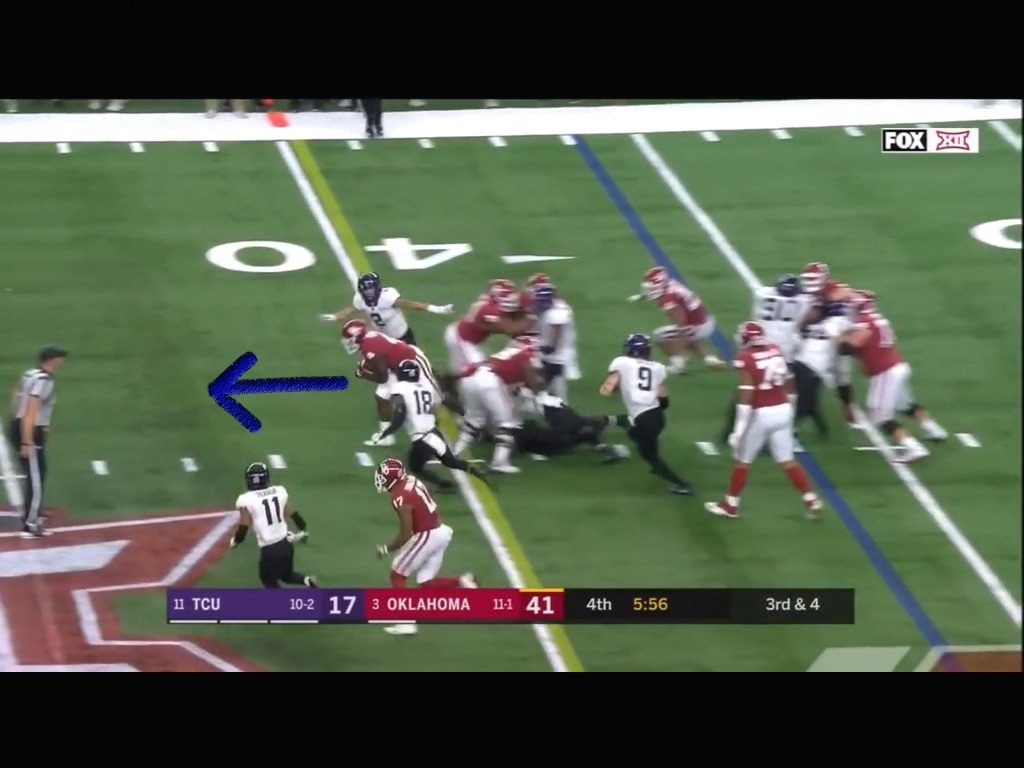 Sermon here is going in between O and Wren.  You can see the gap, and Trey is one on one with the Safety.  With a full head of steam, he’s shown that he’s going to break tackles and win that most of the time. 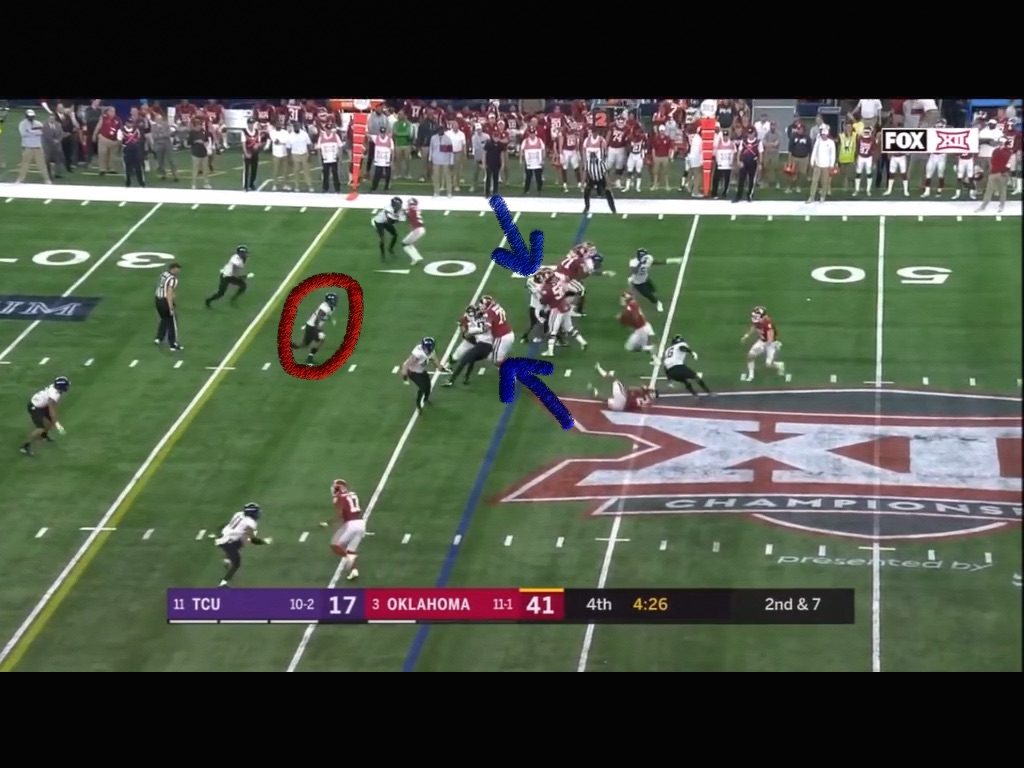 Well, that’s it guys.  Hope you enjoyed it.  I must admit that I was hopeful to start the season, but didn’t truly believe the Sooners would make the playoffs.  I like it when I’m wrong.