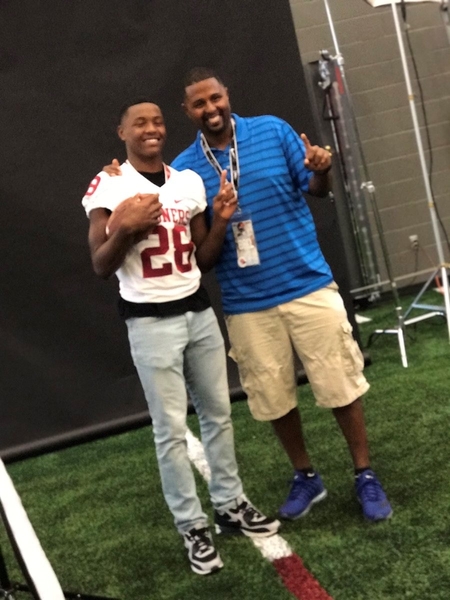 The Sooners have been making waves in college football this season. A spot in the Big 12 Championship is locked in; one more win gets the Sooners a Big 12 Title and a spot in the Playoff. There’s also a guy named Baker Mayfield doing some pretty spectacular things, and currently in the lead for the Heisman. Add to that a few other players up for awards, sprinkle in the current youngest FBS coach in his first year, and toss in some statement wins, and it’s been one special season for Oklahoma.

One area that isn’t slowing down throughout the season is recruiting. Recently, the Sooners picked up a commitment from 2019 RB Isaiah Spiller. Spiller is a Spring, Texas product, going to school at Klein Collins. After a visit for the TCU game, Isaiah knew where he wanted to be. His father, Fred Spiller, took some time to speak with me about his family and his son’s future with OU.

Fred Spiller and his wife Iesha live in Spring, Texas, just north of Houston. They have three children; Isaiah is the oldest of the three, their daughter Naomi is eight years old, and their daughter Arianna is six years old. They have lived in Spring for about five years.

The Spiller family is a Texas family through and through; Fred grew up in the Houston area. He played tight end at Texas A&M starting in 1999, before having to stop football in 2001 due to an ongoing back issue. Fred works at Klein Collins high school as a behavioral specialist. Iesha works in the athletic department at Klein Forest High School, which is in the same school district as Klein Collins.

Sports have always been a big deal to the Spiller family. The kids grew up cheering for Texas A&M in college football, the Houston Rockets in the NBA, and the Astros in the MLB. From there, it spreads out a bit. Fred’s NFL team is the Patriots, while Isaiah roots on the Steelers. Even with all these Texas ties, however, OU was always visible. Isaiah grew up a huge Adrian Peterson fan, while Fred really enjoyed watching Joe Mixon play.

Isaiah really started developing a relationship with OU in the spring of 2017. An invite was sent in the spring for the barbeque at the end of July, then an offer extended in early June. Since that offer, the Spiller family has been up to Norman twice: once for the ChampUBBQ, and again for the TCU game. Fred describes it as a friendly, college town. He also mentions that the campus has a classic, old-school feel to it. The “old” feel end there though; the Spiller family was very impressed with the facilities. Fred noted that the athletic dorms really stuck out, and he loved seeing the big screens for the guys to play video games on.

Throughout the recruiting process, the Spiller family has developed some great relationships with the coaching staff. Coach Jay Boulware, OU’s running backs coach, has been out to see Isaiah a handful of times. He, along with outside receivers Coach Dennis Simmons, have been the main coaches interacting with the Spiller family. Fred really connected with them both. He remembers Coach Simmons telling Isaiah, “We believe you have the talent to be a great back,” and sticking with that the entire recruiting process. It really made an impression on Fred.

Another big positive for the Sooners was early evaluation; OU offered Isaiah when he only had a handful of offers. This was in large part due to Coach Boulware visiting Isaiah a few times; Coach Boulware was able to see Isaiah being a leader both in practice and in the weight room and really encouraging his teammates. Fred knows that OU has coaches that both want Isaiah and believe in him.

Yet another way that concept was really impressed upon Fred was something said at the ChampUBBQ. Fred and Isaiah were sitting at a table with 2019 RB Noah Cain (another OU target), current OU RB Rodney Anderson, and a few others. Coach Boulware came up and, in front of everyone at the table, said “I think you might be as good, if not better, than any of them. I believe in you.” To show confidence in Isaiah in front of other recruits and even current players really showed the Spiller family how much the OU staff cared about him. A common opinion from OU recruits and recruits’ families has been the sincerity that the coaching staff has: they don’t just tell recruits what they want to hear.

I mentioned earlier that Isaiah got offered in early June: you may be unaware of this, but OU was going through a fairly dramatic change at that time. Coach Bob Stoops stepped down after nearly 20 years as OU’s head coach, handing the reins to Coach Lincoln Riley. They called Coach Boulware around the time and he told them about the upcoming retirement. The news initially worried the Spiller family; Coach Stoops had been at the University of Oklahoma for a very long time. However, when Coach Boulware let them know that Coach Riley would be taking over, their concerns were instantly soothed. It was a great comfort to know that many things would remain the same, particularly the offensive system.

Fred has a long history of seeing Coach Stoops as the leader of OU; he arrived at Texas A&M the same year Bob Stoops arrived in Norman. Interestingly enough, Fred with to high school with Sooner great Quentin Griffin. After watching from afar as “Q” went on to win a national championship, Fred couldn’t help but think, “Dang, I should have gone there!” Despite a little friendly jealousy, Fred asked Q about the University of Oklahoma, with Griffin having nothing but great things to say.

As they’ve gotten to know Coach Riley more, the Spiller family is excited about him taking the lead. Fred likes that he is a younger coach and can relate well with the players. He also takes comfort in knowing that the Sooners have a leader for the foreseeable future: with the crazy coaching landscape of college football, it’s nice to know that Coach Riley is locked in at Oklahoma.

When the Spiller family was looking at OU, Fred had a lot of friends suggesting a handful of different schools, claiming that they were better for running backs. Fred’s response? “No other school has as many running backs in the league playing and contributing as OU.” He’s not wrong, as OU has a legit claim as RBU. Another draw to Oklahoma is the offensive system being used; it fits Isaiah very well, as he is a talented back who can both run and catch out of the backfield. The TCU game was a great game to see that offense in motion, as Rodney Anderson had 139 yards receiving, 151 yards rushing, and 4 total touchdowns.

After the visit for the TCU game, Isaiah couldn’t stop talking about OU. Once he spoke with Fred and knew that Fred thought it was the right fit, he was all in. He called the coaches to let them know and got the video announcement process started.

Since committing, many current OU commits have reached out to congratulate him and express their excitement to be in Norman together. The Spiller family definitely plans on visiting OU again in the future. I asked Fred about further recruitment for Isaiah; “Isaiah is pretty firm to OU.”

When he arrives in Norman, Isaiah wants to pursue a degree in Sports Medicine. Fred is excited to have him up there, knowing that he’ll be at a great school with coaches who care about him and believe in him. He plans on attending every home game, as he has family in Dallas he can stay with. The Spiller family is excited to be part of Sooner Nation.