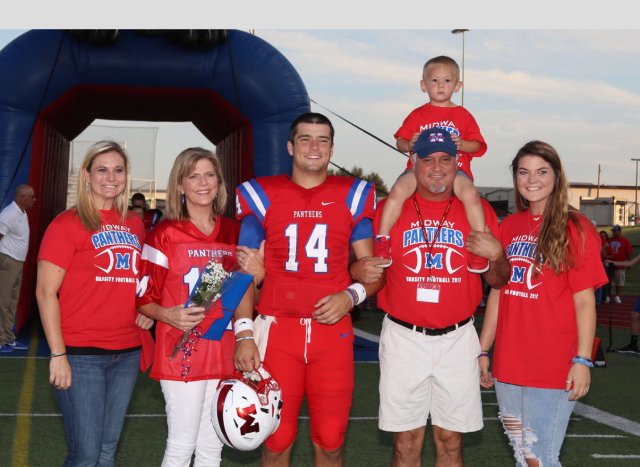 That’s it. College football is over and we won’t get to see it again for many long months. It’s ok to weep.

However, the Sooners aren’t stopping. Spring practice will arrive quickly, recruiting will continue, and new commits will be on campus soon. One of those new commits is 2018 QB Tanner Mordecai.

Mordecai committed to the Sooners in June, and was a huge get for Lincoln Riley. I recently spoke with Tanner’s father, Micah Mordecai, to discuss their progression toward becoming Sooners.

Micah Mordecai and his wife, Leann, live in Waco, Texas. Leann, who works in the hospital as a radiology tech, grew up around there; Micah, a chiropractor, grew up in the El Paso area. Micah went to Texas A&M for school, then ventured to Waco to get experience with a successful chiropractic practice in town. There, he met Leann at the hospital.

The couple has been married for 20 years and has three children. Their eldest daughter played softball at the University of Kentucky, and is raising a three-year-old boy. The middle child, their second daughter, is currently playing softball at Midwestern State University in Wichita Falls, Texas. Tanner, their youngest, is headed to Norman in a few short months.

The Mordecai family has a lot of ties to sports, with all three children playing college athletics. The three of them grew up playing a little bit of everything, and started focusing on one main sport in high school. Tanner grew up watching a lot of softball and playing baseball – his play on the diamond led people to think he could be drafted out of high school to the MLB. His sophomore year, he decided that baseball wasn’t what he enjoyed the most and began focusing more on football.

Micah compares his experiences in Norman to College Station – they both have that college town feel. A big difference that he has noticed is the proximity of a big city to Norman – Oklahoma City is just a short drive north. One of the first things Micah noticed when he walked onto the beautiful campus is how committed OU is to football – the facilities speak volumes to the success the Sooners strive for. OU has a lot to offer recruits.

One connection for the Mordecai family to OU came in the form of friends, the Henry family, who attended Baylor University. After their education in Waco, they moved to Norman.  Dr. Henry teaches in the Education Department at the University, while Kevin Henry is the color analyst for the men’s basketball radio broadcasts – you can hear him alongside Toby Rowland every game. The Henry family had nothing but great things to say about Norman. The Henry family isn’t the only OU connection the Mordecai family has. Current OU safety Kahlil Haughton was a senior at Midway when Tanner was a freshman. Kevin Murray, Kyler Murray’s father, is Tanner’s quarterback coach. Micah and Kevin have had several positive conversations about the recruiting process and how OU fits their sons.

The Mordecai family’s interactions with OU started in the spring of 2017. After a 2018 quarterback commit decommitted from OU, Coach Riley went to Waco to watch Tanner practice in spring ball. An offer came in early May, and Tanner committed June 1st.

The decision to commit came after great deliberation. For every university Tanner considered, he went through a list of pros and cons with his parents. When it came time to run down the list for OU, they couldn’t come up with a con for a long time. After time discussing the Sooners, Micah mentioned one potential con – at some point, Bob Stoops would retire. They didn’t know when it would be – he could do so in a year, in three years, in ten – but eventually it would happen. This was something to keep an eye on, as they wanted stability at the university.

Tanner took time to himself to consider his decision. The Mordecai family had several more visits they wanted to take, but he still wanted to think about the options. He spent a day fishing on the boat, weighing the pros and cons and thinking about the future. Tanner came back to the house and told his parents they didn’t need to visit one of the remaining schools, then said the same for another school. Tanner then announced that he had decided he wanted to go to Oklahoma.

The commitment came on June 1st – the very next week, the possibility of Bob Stoops retiring became a reality, and much quicker than they had believed possible. While it came as a shock at first, it was comforting to know that Lincoln Riley would be taking the reins. Tanner’s parents believe he is going to the right place.

I asked Micah if Tanner knows what he wants to study at OU, to which he responded, “Not at all.” Uncertainty of what to study is a common challenge for college freshmen; it is, after all, a big decision. It’s a decision that Micah began asking his son about when he was 13. The two were at breakfast and the father asked his son what he wanted to do when he grew up. Tanner responded that he wanted to be a professional baseball player. Micah chuckled and asked his son what Plan B was? Professional football player. Plan C? Professional basketball player. Plan D? Professional angler. Micah said alright, what if it’s not one of those – what if pro sports doesn’t work out? Tanner responded, “Dad, I’m 13.” “Touché” was all his father could answer with.

Tanner debated enrolling early this semester, but decided against it. Coach Riley is very understanding of that decision with OU recruits. Micah said Coach Riley told them that if they are ready, OU is ready; if they aren’t ready, stay home. There was no pressure from the staff, as the staff knows that rushing enrollment can be worse for both sides.

When asked if they plan on seeing Tanner play, Micah says that they plan to make “any and all games” that they can attend. They are excited to see Tanner in Norman and ready to see him become a Sooner.