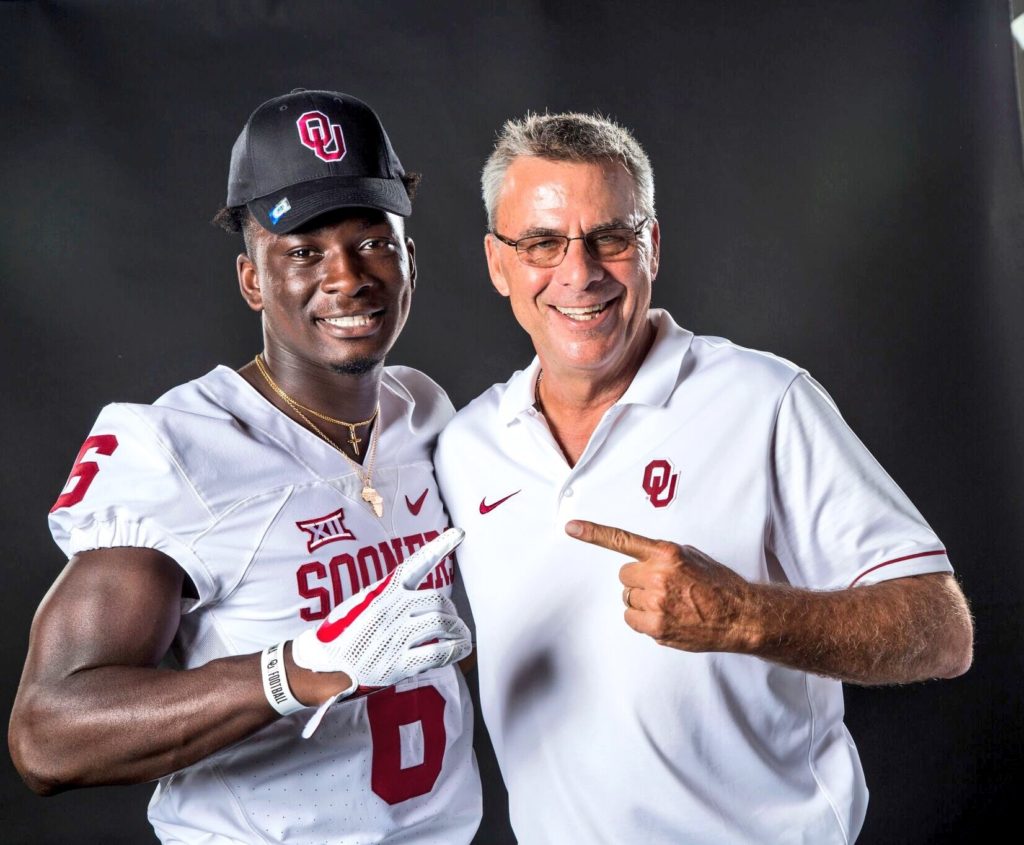 TFB With the Family | The Asamoah Family By: Ryan Lewis Posted on: November 15, 2017

Oklahoma has had quite the season up to this point. A couple of great wins, players performing at insane levels, and Lincoln Riley’s debut head coaching season running smoothly. Another piece in all that has been continued excellence in recruiting. One commit for the Sooners who has everyone excited is 2018 OLB Brian Asamoah.

Asamoah committed to the Sooners the week after the first game of the season. He was coming off a visit to Norman for the opener and was ready to take that step.

His brother, Dominik, and mother, Agnes Osei, were kind enough to speak with me recently to answer some questions about their family and experiences with the University of Oklahoma.

Brian is one of five children: Eric, Kennedy, Dominik, Brian, and Manuela. Their family is originally from Accra, Ghana, the capital of the country. In 2000, they moved to Columbus, Ohio after a short stay in New York; although they had family there, it was a little crowded for their liking.

The Asamoah family grew up with a strong tie to football – the original kind. Soccer is the most popular sport in Ghana. They also grew to enjoy American football as time went on. Dominik is a Buckeye fan, but they have lots of football ties: they have a cousin playing at Bowling Green and another at West Virginia, so they have lots of schools to root for. Dominik played at Fairmont State University, and it was his time playing football that sparked the interest in Brian.

The first opportunity to visit Norman was for the ChampUBBQ in late July. Brian went with his brother Dominik, and they really enjoyed the visit. TFB’s own Brandon spoke with Brian shortly after the BBQ.

Another interesting note about him is that his favorite part of the day was watching film with Sooners linebacker coach, Tim Kish. I asked Asamoah what he thought about the Sooners coach and he said, “Coach Kish is just a great coach and a better individual.” He considers himself a film junkie, so you know that is something Tim Kish is loving about Asamoah. TFB: ChampU BBQ Wrap

Coach Kish and Brian developed a great relationship almost instantly. Coach Kish (and the Stoops brothers) are from Ohio, creating another level of connection.

Norman is too special, this visit was amazing. #Boomer

On the next visit, September 2nd for the season opener against UTEP, his mother was able to join him. She absolutely loved the visit, telling me “Norman has a family-like atmosphere.” This has been a common theme for parents – Coach Riley and staff strive to make it home for everyone. They are obviously succeeding, as Ms. Agnes said that she, “felt like it was a home for her son.” Dominik mentioned that, while football is football everyone, the tradition of winning in Norman is impressive. “Coach Stoops built a legacy for Coach Riley to continue.”

Another standout from the visit was the way people acted – Dominik mentioned that the staff stands out in the way they help the players and want to see them succeed. Additionally, Ms. Agnes really appreciated that they wanted to see Brian succeed after football, and had a plan for more than just sports for her son.

Coach Riley, Coach Mike Stoops, and Coach Kish have all been key parts of Asamoah’s recruitment. The Asamoah family has a lot of respect for Coach Riley as the new leader of the program. Dominik mentioned that Coach, “… really understands the players from a different point of view than most coaches due to his age.” When Brandon asked Brian about Coach Riley, this is what he had to say:

Asamoah said he had a chance to have some one on one time with Coach Riley multiple times throughout the day. He was clearly impressed with Riley, “You can’t tell he just got hired as a head coach two months ago. He operates like he’s been doing this for years. He cares about his players and wants to develop all of them. He brings a lot to the table as a person and I see why a lot of athletes have bought into his system already.” TFB: OP July 31

The early play of Kenneth Murray really impressed the entire family; a true freshman starting at linebacker for the first game of the season shows a willingness to play talent. It also shows that hard work can get you onto the field, and that youth is not an inhibitor to playing time. TFB’s own Super K spoke with Brian about this shortly after his visit for the UTEP game.

Earlier in the week when I spoke with Asamoah, it was clear that the fact that Lincoln Riley was willing to play true freshman, Kenneth Murray early was among the things that intrigued Asamoah, “That’s the message the coaching staff has been preaching to me. The best will play and in my eyes it seems that he (Murray) earned that position”.

I asked Asamoah how he feels about freshmen playing early, “As a true freshman Kenneth presents himself as a seasoned veteran. I think he’d do just fine under the wings of Coach Kish. It’s alignment, assignment football and with the amount of athleticism he possesses he’ll do just fine.” TFB: OP Sept 8

When considering where he wanted to commit, Brian and his family looked at a lot of factors, including program tradition, coaching staffs, depth charts, opportunities to play, etc. Some of the final schools they were looking at included Pitt, Penn State, and Michigan, along with Oklahoma. Ms. Agnes wanted him to choose the school that would help him accomplish the goals he set for himself, and let him know that distance shouldn’t be an excuse for him to choose or not choose a school. She wanted to support him in his decision, but wanted to ensure that he made his own choice. It is, as she said, “his college to go to.” As they weighed the options, Oklahoma seemed like a natural fit.

Brian has been committed to OU for several months now, and has developed relationships with his future teammates. In the group chat, it is a true brotherhood, and he is getting very close to many of them.

The Asamoah family is supportive of Brian in his quest to Norman, and excited to see where it takes him.