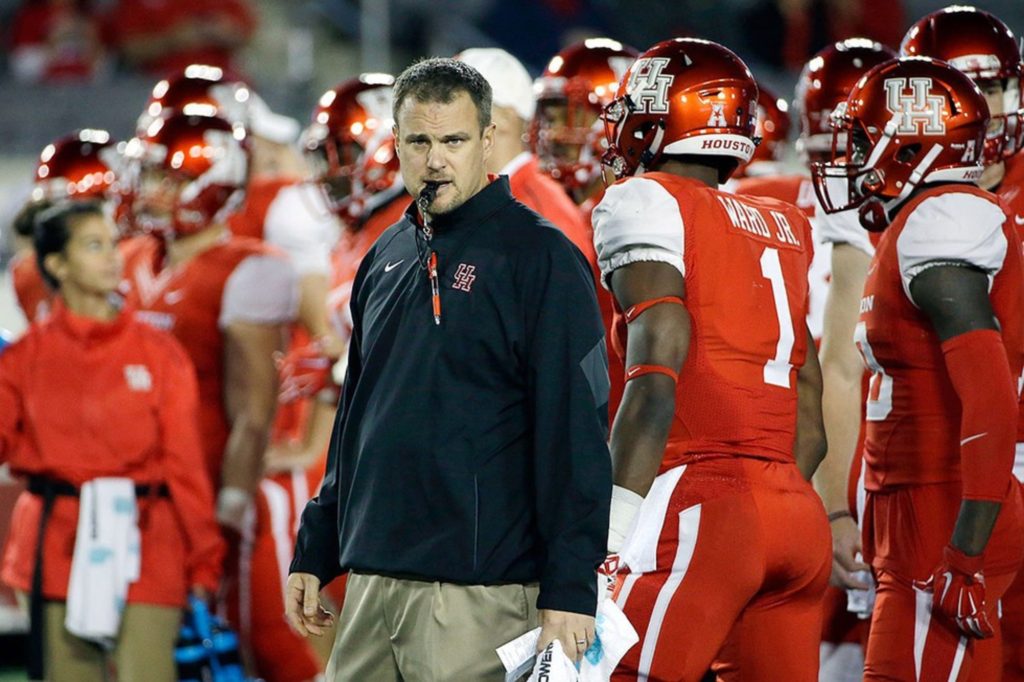 In an effort to get some additional insight on OU’s upcoming opponent, TFB reached out to Joseph Duarte, the University of Houston beat writer for the Houston Chronicle, to answer a few questions for us (and you) about the upcoming match-up this Satuday between Cougars and Sooners.

TFB: Is Houston’s offensive line to start this season going to be better or worse than it was at the end of the season last year?

Duarte: It can’t get much worse. Last year they had a lot of injuries. For everything they went through last year, though, they held it together nicely. They won a lot of games despite the injuries. This year they replace both tackles and an interior lineman, so there are question marks. There is a lot of upside to the unit, but a lot of unknowns as well. Again though, it can’t get much worse than last year.

TFB: Has Greg Ward Jr. continued to develop this offseason as a downfield passer?

Duarte: Word out of camp is that he is a ‘more complete’ quarterback. So we get the sense he may have developed as a downfield passer, but that may not be necessarily a staple of this offense. They didn’t attack down the field much last year and it’s hard to say whether that’s because they weren’t comfortable doing so, or if it just isn’t a big part of what they look to do.

TFB: Houston lost their starting running back from last year, so what can we expect from the new starter, Duke Catalon? Is he ‘just a guy’ or can he really push Houston’s running game forward? Also, any depth at the running back position behind Catalon?

Duarte: He (Catalon) will be their bell-cow. They have nobody behind him who is proven. The four or five guys behind Catalon just didn’t separate themselves in fall camp, which was probably the biggest disappointment of camp.

Catalon has a little bit of a bruiser and speedster mentality. Tom Herman said Catalon is second to only Ezekiel Elliot in terms of open field athleticism that he’s seen as a coach.

There are guys behind Catalon, but they’re just guys at this point. It’s a back up by committee situation.

TFB: Do you expect to see Ed Oliver play on Saturday? And what have the reviews on him been coming out of fall camp?

Duarte: Oh yeah…I’ve heard nothing but good things about this kid out of camp. A beast. Not expected to start necessarily, but they’ll rotate him in. They rotate in six or seven guys on the defensive line.

TFB: Houston tends to leave their secondary in one-on-one coverage a lot due to their desire to pressure. What’s the word on the secondary, do you expect the new guys to be an improvement over last year?

Duarte: Three new starters. Herman believes that eventually they may be better than the other group, but they also haven’t really played yet. Jury is still out on the secondary at this point. Last year’s unit had a knack for making a big play, getting turnovers. There are athletic guys in this year’s secondary, but again a lot of question marks that will need to be answered.

TFB: Is there a sense that in the second year in the system the team is more comfortable with Herman’s offense/defense overall?

Duarte: Yeah, last year they were having to teach how they do things. This year, they don’t have to do that. Every second is spent on game-planning or implementing, less wasted time.

Duarte: That’s a tough question because we had no idea they would be so good last year. If I had to guess right now, the needle is slightly downward based on all that they lost. They are replacing their best wide receiver, left tackle, starting running back, several defensive backs…it’s a matter of waiting to see what new guys will step up.

You can’t lose what they lost and say you’re better. You can say they have the potential to be, but we need to see them actually do it first.

TFB: Any freshmen that are expected to play OU fans should be keeping an eye on?

TFB: Got a score prediction?

Duarte: I think it’s going to be close at halftime, but around the middle of the third quarter is where I think OU is going to turn it on.