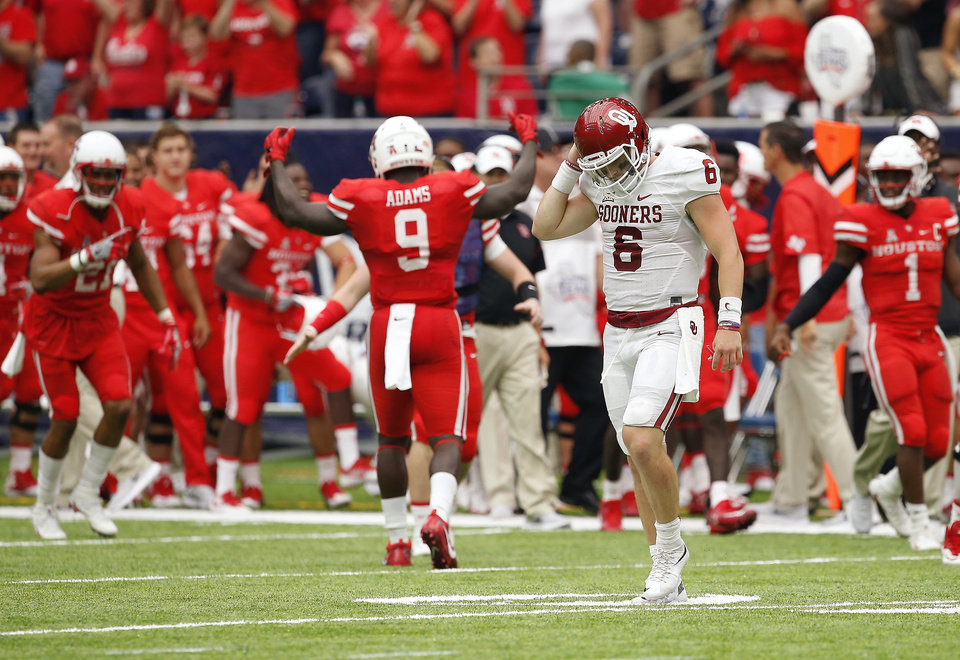 Some Thoughts On OU vs. Houston By: Jordan Esco Posted on: September 4, 2016

Man, what a disaster.

Let me start by saying I’ll do some of you a favor in getting this out of the way right up front. If what we saw yesterday didn’t cause you to drastically reassess your expectations for the rest of this season, then you’ll probably want to just stop reading right now.

Was it one game? Yes.

Is it reasonable to assume that, even with the issues from yesterday however problematic or not you consider each to be, this team will continue to get better as the season continues to progress? Sure, probably.

What I saw yesterday, however, in a number of instances looked to be more of a talent problem than a “scheme” problem and the former of the two, I’m afraid, is not something so easily dismissed.

But we can get into some specifics and now that everyone has had a chance to kind of sleep on things, I’m even more interested to get your feedback on both my take on things and, of course, your own.

* Not that you need me to tell you this, but it’s going to be a pretty miserable week to be an OU fan. Now I say that with the caveat of presuming you pay attention to the CFB landscape and the voices within it. If however you do not, then respect, my hat’s off to ya. Wish I had your will power.

For the rest of us, however, it’s going to be a world of bleep we really have no choice but to sit there and take.

* I can’t help but always roll my eyes at the cherry-picking of unfavorable stats that national media and the like are always giddy to pull out of you know where when/if Bob Stoops & OU come up short in a game like Saturday.

That said, on some level they also have a valid point.

Now being an OU fan and watching WAY more OU games than any other, I suspect it makes things feel like what happens to OU happens to OU more than any other program. When, in reality, like most things in life I suspect it all balances out in the end. But it sure feels like the whole ‘OU chokes in big games’ narrative has at least a little bit of truth to it.

But maybe I’m still just pissed off about Saturday.

* Welp, on the bright side we probably won’t ever have to suffer through the Boise State ‘Statue of Liberty’ play highlights any longer, because it has now been replaced by Saturday’s ‘Kick Six.’

* Without the benefit of having had time to go back and watch the game multiple times and, more importantly, the end zone/All 22 camera angle, it’s probably impossible to truly determine if the issue was more (1) Baker Mayfield simply holding on to the ball too long trying to make the perfect play or (2) the OU wide receivers’ inability to get open.

In all reality common sense would tell you it’s probably some combination of the two. But the obvious dilemma that assumption creates is that the former (holding the ball) is somewhat easily correctable while the latter (WRs not creating separation) is potentially a much bigger problem as the team moves forward.

* Again, maybe you could put what looked like some considerable protection issues on the offensive line itself or on the aforementioned holding of the ball too long. But it sure looked to me like Mayfield was often running for his life out there.

Not to mention the lack of anything, outside of the first 20 or so minutes of the game, that resembled of a commitment to the run game. Once again, whether you put that on Lincoln Riley and poor play-calling to go away from it so early, or him being “forced” to do so because the line couldn’t create lanes for Samaje Perine and/or Joe Mixon, at this point I couldn’t really say.

* If I really simplify it, to me the things we thought might be issues (OL, LB, WR) were issues, but the much more worrisome aspect of that game against Houston was what I think literally everyone expected to be the strength of this defense, i.e. the secondary, looked like a major problem.

Again, it’s one game but I don’t know how you could have watched that one and not come away thinking CB is going to be a problem all year. I mean whether it’s Dakota Austin, Parrish Cobb, or, hell, even Jordan Thomas, they’re going to have to get significantly better than what we saw on Saturday before I could ever feel confident in that back end of the defense.

The thing that really had me shaking my head was you take all that time to have the CB competition throughout spring/summer, then it takes you less that a quarter and a half of actual football before you bench your starter (Austin). Which leads me to what I feel is the obvious question…if that’s all it took then why was he ever the starter to begin with?!?

The simple fact of the matter is Austin is who is he as a player. I have no interest in sitting here and bashing what by all accounts is a quality young man, but the limitations to his game seemed fairly obvious and frankly I didn’t need Saturday to tell me that. I know people are having all kinds of fun with that tweet of the video with him trying to tackle a guy that doesn’t even have the ball. But heat of the moment type deal, it’s hard to really give the guy grief when if you really think about it all he was trying to do was make a play.

And how hard can you really be on a true freshman in Cobb, who showed up later than everyone in his class after the Baylor debacle and then gets thrown into the fire right off the bat. He had some moments, probably more bad than good, but I’ll be curious to see if he gets a benefit of the doubt not afforded to some others (cough, PJ Mbanasor, cough). Ultimately that doesn’t matter, but it was curious to see how quick they were to put him out there.

* Six rushing attempts each for Perine and Mixon is just f’ing unacceptable. That is all.

* I thought Dede Westbrook looked like he can be a legit No. 1 threat. I also thought they still didn’t get Mark Andrews involved, after all the talk this spring/summer that they had learned from 2015, nearly enough. Yes, he finishes as the team’s leading receiver in the game and with two TDs, but he had just three receptions and I would venture to bet not many more actual targets than the three he caught.

Outside of that, it sure seemed like the wide receiver position was a considerable disappointment. Jarvis Baxter’s fumble (though I will forever maintain that was a terrible replay decision), Geno Lewis’ lack of involvement, and/or AD Millers lone, quality though ultimately meaningless catch. I thought this position group left a lot to be desired.

* I do agree with what many were saying after the game that as bad as the defense was at times in the first half, especially on third downs (and good lord were they awful. I mean for the love of all that is holy, has any team in history given up more 3rd-and-long first downs than Bob Stoops teams? I swear it’s like I’m more confident in getting a stop on 3rd and 3 than I am in 3rd and 13. But I digress).

There were noticeable improvements made in the second half, specifically up front. I thought Charles Walker was virtually invisible for most of the first half, but then turned into the unstoppable beast we all know (and need) him to be in the second. But I’d have to go back and really focus on the play of the d-line, because from memory not many other guys really stood out.

* I will also say to the Mike Stoops and the defenses’ credit, I thought the game plan was the right one. The goal was to make Greg Ward Jr. have to beat you with his arm. The problem of course being he did exactly that.

Granted I quite confident M.Stoops, Kerry Cooks, and literally everyone one of us in crimson and cream didn’t anticipate OU’s secondary having as atrocious a game as they did.

The issue wasn’t with the plan, as I so often feel it can be, rather with the execution. Signed, Captain Obvious.

* Regarding Ogbonnia Okoronkwo….look man, there was a reason he didn’t play last year, or when he did play would get yanked. It was because of stuff exactly like what we saw against Houston.

Now did he have a couple nice moments with his pass rush? Sure. But I’m not exactly breaking news here in declaring that the good definitely did not outweigh the bad.

* I don’t think we need to spend too much time on this one, but as I said in the game thread I wrote about Austin Seibert on Friday for a reason. And after Saturday, it appears as though my concerns were justified.

No, this has nothing to do with the missed field goal — although that was certainly not confidence-inspiring. and yes, I’m aware of the popular theory/speculation that his timing/steps were off on the kick — and the ‘punch yourself repeatedly in the face’ inducing touchdown return that followed. Rather it’s about the disturbing number of kickoffs he either failed to get into the end zone at all or at least deep enough to illicit a touchback.

Now clearly it didn’t hurt OU in the sense Houston really never had a big return or ran one back, but over the course of the season odds are that won’t continue to be the case. Does it ever cost OU a game? Obviously I couldn’t say. But just the chance of it happening was why I ever wrote about it in the first place.

It just seems like maybe they are asking him to do too much.

* And while we’re on the topic of kick returns….hey, Joe….you reading this….if you catch the kick two yards deep….BRING THAT MUTHA @#$% OUT!!!

I’m happy to take my chances with you getting it at least back to the 25, rather than wasting an opportunity for a big return. At one point I had to wonder if the coaches didn’t give him the Sterling Shepard punt return treatment.

* If you care about such things, based on the participation report the only true freshmen whose redshirts were burned include: Parrish Cobb (duh) and Mark Jackson.

I suspect that changes next week, assuming the Louisiana-Monroe game goes as we all hope. But I guess we’ll just have to wait and see.

I suppose 1,800+ words is more than enough punishment to subject all of you to. So what did I miss? Or what do you disagree with?

Let me know in the comments.