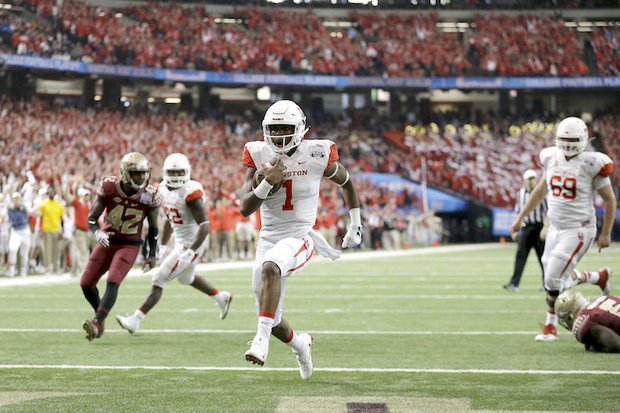 I’ll be the first one to tell you I’m no expert like some of the other guys here at TFB when it comes to breaking down film. But in an effort to prep for Saturday, I decided to go back and watch last year’s Peach Bowl match up between Houston and Florida State.

I suspect most, if not all, of you are aware Houston won that game fairly comfortably 38-24 and that result — along with many other factors — has led to the Houston hype train running at full steam as we head into this 2016 season.

Now I didn’t actually watch this UH/FSU game at the time and outside of a handful of times, haven’t really seen an overwhelming amount of tape on Houston in general. So I would probably say I am essentially coming into this with a clean slate, with exception to the decent amount I’ve read to date on the Cougars and their rising star of a head coach, Tom Herman.

I don’t know that how little I’ve watched Houston to date will be a good or bad thing with respect to attempting to take anything away from this game and/or how any of it may carry over to this Saturday. I’d also happily concede that one game is nowhere near enough of a sample size to draw any significant impressions from, so just know that I know you know that.

Now that we cleared that up, let’s get started.

* The excuse every Florida State fan has made (I’m assuming) is that the Noles weren’t up for this game because they didn’t really have any reason to be. Sounds like Alabama fan after the Sugar Bowl. But I will say, the 10 or so seconds the cameras are on the FSU players for the coin toss, it sure did look like they couldn’t care less about being there.

Stupid and I’m sure meaningless observation I realize, just saying.

* Not exactly breaking news in stating the strength of this Houston defense is their front seven. If you were to believe UH fans, it’s somewhere in the neighborhood of the peak Bama and/or the ’85 Bears, or at least that’s what I’ve gathered from a casual glance at their message boards.

And that front seven needs to be good, because the secondary is….um….well, not good. The front seven attempts to cover for that by being aggressive on early downs, looking to put the opposing offense in third and long situations to make the secondary’s job easier.

Houston moves guys around, stands them up, and blitzes from all kinds of different angles. This OU offensive line will have their work cut out for them, that much I’m certain.

* Elandon Roberts (No. 44, senior LB) was one hell of a player for this Houston defense last year. They’re definitely gonna miss him.

If Lincoln Riley can exploit that aggressiveness early, it could get this OU offense off to the quick start they’ll likely need to keep pace with Greg Ward Jr. & co.

* Speaking of Ward, if you won’t have seen much of him prior to Saturday, I’d describe him to you like this. He’s a good, not great passer (come at me Houston fans). He’s a WR playing QB and while he does it better than most, his throws reflect that. His athleticism and the constant threat of what he presents outside the pocket create opportunities for his receivers that wouldn’t otherwise be there.

He’s arguably as dynamic an athlete as OU will face all season, but if you can contain him to the pocket the odds of him beating you purely with his arm decrease significantly. Granted, that — keeping him in the pocket — is MUCH easier said than done but that will be the task facing Mike Stoops and this OU defense.

* One other quick take on Ward, who had to leave this particular game on two separate occasions. He’s not exactly a big guy, though I suspect you already knew that even if you’ve just seen mainly highlights.

He’s listed at 5’11” 185 which as with any college roster is probably a little bit generous with respect to both numbers. If you can make him pay for those carries, the punishment can take its toll.

Now coming into the first game, he’ll clearly be as fresh as he will at any other point this season. But I feel confident in saying this OU defense will be looking to make every shot they can get on Ward count. Nothing dirty mind you, but they’ll take every opportunity given to ‘let him know we’re there’ type of deal.

Though I will say to Ward’s credit, it’s abundantly clear he knows just how valuable he is to this offense. Ward will look to avoid contact whenever possible, even sliding down in the open field at times if he senses a hit coming.

* Assuming Ogbonnia Okoronkwo is indeed the starter at the ‘Jack’, based on what little film they have of him I’d expect Houston to attack Obo’s side of the field early and often with their zone-read action. It’s a staple of their offense and something we all know/remember Obo having issues defending in the past.

* Watching this Houston offense, I can’t help but feel easily the two most important players on the field for this OU defense will be the two Evans linebackers, Jordan & Tay.

* This Houston defense looks to be very much susceptible to being beaten over the top. Something we haven’t seen a ton of from Riley & OU, but maybe we see them take so more chances down the field with bigger guys like Mark Andrews, Jeff Mead, AD Miller, Dahu Green, etc. who are capable of going up and getting the football.

* The plan for the Houston defense was clearly to try and take away Dalvin Cook, as it would be with any team facing Florida State and their dynamic RB. And to the Cougars’ credit, they accomplished their goal holding Cook to just 33 yards on 18 carries in the game. Granted, it helped FSU having to play from behind for virtually the entire first half. But still, Cook wasn’t exactly lighting it up even before that.

And while Cook and Samaje Perine are, in my opinion, virtually on the same level, the biggest difference I come away with is two-fold. (1) FSU didn’t have a Joe Mixon, who can obviously be used to spell Perine, but more importantly the two can (and will) be used in tandem. And (2) Sean Maguire is nowhere near the playmaker that Baker Mayfield is.

Will that ultimately be enough to win the game? Only time will tell. But at least on paper, it’s one hell of an advantage in OU’s favor coming into this game.

* Houston throws the ball sideways A LOT. They’re happy to take what you give them and let their receivers try to make plays in space. If we see the typical M.Stoops CB cushion, it will just make Ward’s job that much easier.

* OU defense better be ready for a trick play or two.

* Basically midway into this third quarter and while the Houston defense has certainly played well, it’s hard not to feel their success is due at least in part to Florida State’s inept offense/play-calling.

* Again going back to Ward real quick, if he’d been accurate with any number of some of these throws he probably would have thrown for 400+ instead of “just” 238. But that goes to my point about him being a WR playing QB from earlier. You’re constantly seeing guys sliding to the ground or diving or jumping to haul in most of these passes. Don’t get me wrong, Ward gets it there more often than not. But it’s rarely on target/hitting his guys in stride.

* Alright, I’ve seen pretty much everything I needed to in this one. Didn’t drastically change my opinion of who I think this Houston team is and the threat they present to OU on Saturday.

I think if OU is smart and doesn’t play 5-7 yards off outside, thus letting Ward play pitch-and-catch with his receivers, then it comes down to limiting the damage he creates on the ground.

Do what they (being OU) need to do on offense — i.e. get the ground game going, avoid turnovers, and protect Mayfield — no reason whatsoever the Sooners can’t win this game.