– 2019 Wide Receiver Spots & Recruiting Notes: The Sooners are off to hot start with 2019 recruiting. Oklahoma already has the QB for the class locked up, in addition they have a WR, TE and DB in the fold as well.

Per our sources, with Trejan Bridges taking up one of the WR spots in 2019 that leaves two more outside receivers and one slot position spot open (three total). Oklahoma has a lot of options:

Theo Wease: Oklahoma has hosted Wease on several occasions. He was once committed to Oklahoma, but opened his recruitment back up once the offers started rolling in. Wease visited Oklahoma last weekend for the TCU game and from what we are told that visit went amazing. Wease is very close with Bridges and they talk a ton. Wease has Oklahoma in his top spot, but isn’t quite ready to announce a decision just yet.

Jordan Whittington: Whittington visited OU for the first time this past weekend and tweeted out how much he loved the visit. The star 2019 receiver didn’t have Oklahoma in his top four when he named those schools a few months back. That didn’t stop Oklahoma from pushing him and seeing if they could, at the very least, get a visit out him.

Sources indicated that OU not only made it into Whittington’s list, they surged up the list and are now real contenders in a race they weren’t even part of it last week.

Per our source, Whittington, along with Wease, are expected to make a decision sometime in the spring. Another source told us they are unsure if Whittington is a slot or outside guy, but he can play both and that is good thing because he could fill either spot in 2019 class.

Jadon Haselwood: Georgia WR commit, Jadon Haselwood has long been a OU fan. As we have reported, he even comes from an OU family with deep, deep roots. That said, Haselwood is committed to UGA and has a lot of 2019 Georgia Preps friends committed to the Dawgs as well. Still, it’s hard to take his lifetime love for the Sooners out of him. That love is why Haselwood visited OU for the Texas Tech game a couple of weeks ago. Haselwood told us he will be returning and taking an official visit to OU. He is in regular contact with the staff.
Oklahoma is going to be a problem for the Dawgs in this battle.

Our source tells us that with Haselwood it’s a numbers be damned situation as he is a take no matter what. He would be a guy that OU would make room for as he is considered, by most, as the top WR in the 2019 class.

Henderson was set to visit OU this past week, but his father had to work so that visit didn’t happen. That said, I spoke to his his father, RJ, earlier this week and they are looking to be in Norman for the WVU game. Henderson is very close to OU receiver Cedee Lamb and they speak often. The problem here is timing. Henderson wants to commit on a signing day and that may be too long as OU is looking to fill up at the WR position at some point in the spring or early summer. We will see how things play out after his visit though.

NOTE: I spoke to several sources and OU is in very good position with all of these guys. So, if one guy jumps in the boat, due to the limited numbers it could put pressure on some of the other guys to reserve their spot…and fast. – (Brandon)

– Abdul Malik McClain: As you all know, Super K has been in touch with the head coach and mother of 2018 DE/OLB, Abdul-Malik McClain. K is hoping to have more from them on how McClain’s visit to OU, this past weekend, went.

I was able to speak to some sources on the OU side so I’ll give you the general sense of things. First, it doesn’t take much expertise to see just how good McClain is. But the word we’ve heard from the OU side is they think McClain could be Obo 2.0. McClain, as we previously mentioned, is a good two to three inches taller than Obo.

This is what we’ve heard so far…

– Mom and Dad did both make the visit and loved it. Sources indicate to us that the staff got a good vibe from the parents making the staff feel like they’re in a good spot for McClain. We are told that the staff didn’t push for a commitment because the relationship is still fairly new and this was the first visit out to Norman. They did, however, impress upon the family that there is a numbers crunch just to make them aware of the fact that they won’t be able to wait too long.

– We are also told that the Sooners absolutely made McClain rethink things regarding UCLA and his commitment to said program. He remains committed but the Sooners have given the family something to think about.

– K previously mentioned that McClain’s coach said McClain wants to take all five of his official visits which would include schools like Washington, USC, Ohio State, and Notre Dame. However, I’m told that now, the McClain’s may only choose to visit UCLA and Ohio State before making a decision. Hopefully, can get some additional confirmation on that.

Overall, like where OU stands here. We’ll continue to bring you more on this recruitment as the Sooners would like to continue to stock pile elite pass rushers and McClain appears to be one of those. – (Brandon)

– More on McClain: I did check in with coach Harlow who is the coach of recent 2018 OLB/DE visitor, Abdul-Malik McClain. Unfortunately I don’t have a ton to tell you just yet. Coach Harlow said, “I honestly have only seen him briefly at our team meeting. Just haven’t had a chance to discuss it in detail with him yet”

However, coach Harlow did say, “I know he had a big smile when I asked him how his trip went”.

Thank You Oklahoma Staff for the great official visit we had a great time !!#BoomerSooner ?⚪️ pic.twitter.com/tfnguglg4q

– Team Note | Freshmen Development: Earlier this week, I was speaking with a source about the OU vs. TCU game and in the course of the conversation the source mentioned an interesting practice change that coach Riley instituted. Source said that the back-up players, freshmen, walk-ons, etc. actually have a full weekly scrimmage every Thursday where they run the OU offense and defense. In other words, unlike what they would do in their normal role on scout team which is to show the starters the opposing team’s defense or offense, they go through the first team’s defense and offense. Source said, this keeps guys engaged because they have a chance to prove show their progress every week but it also develops depth. – (Super K)

– Team Note | Kenneth Murray: A bit of a random note here on Sooners freshman LB, Kenneth Murray. Talked to someone earlier this week about the development of the young linebacker and was told, “The coaches will tell you they haven’t seen many guys like him. He’s special. He’s a leader even though he’s young. Guys like Obo and Parker will even follow his lead because he has that quality about him. He does have a ways to go learning but he absolutely has the makings of something special”. – (Brandon)

– EJ Ndoma-Ogar: The Allen High School pipeline is definitely strong at OU as you might already well know. On the football team alone you have Kyler Murray, Bobby Evans (and Tay Evans, former OU LB that I believe is still a student at OU and in a form of a coaching role if I’m not mistaken) and Lee Morris who all are Allen alums. Add Jamuni McNeace from the basketball squad and you can see what I mean.

Everyone is aware of where the Sooners currently stand with talented 2019 WR Theo Wease JR after his recent visit this past Saturday. However, there was another Allen Eagle in Norman last weekend, 2019 OG/C offer EJ Ndoma-Ogar.

Ndoma-Ogar, 6’3″ and 300-pounds who holds over 20-offers at this point has already been to Norman before but sounds like he definitely enjoyed the return visit, “I loved it. The atmosphere was amazing. To be part of that tradition would be a true honor.” I then followed that question up with a question about the existing Allen presence in Norman and if that plays a factor with him at all and how he views the Sooners in his recruitment. Turns out he has a lot more ties to the program than just that.

“Kyler and my older brother are best friends. He (Kyler) has been a pseudo big brother to me since I was in middle school. Bobby is just a great dude! Always fun to be around,” he said. “Plus we lived in Katy and Rodney (Anderson) and my older brother played together and became great friends.”

The ties don’t stop there and seem to get even stronger as he kept on.

“PLUS my older brother is a junior at OU. PLUS PLUS my grandfather got his PhD at OU. And bonus, my dad named his snake (who has since passed) Julius Cesear after JC Watts (former OU QB).”

Obviously, quite a bit there that seems to be working in OU’s favor.

Ndoma-Ogar says OU likes him at Offensive Guard but Bedenbaugh is aware he can play Center as well. Speaking of the Sooners OL coach, EJ got the chance to catch up with him while he was in Norman. “Coach B is the MAN!! I love his intensity. You can also see it in how the line plays.”

After hearing all this it’s pretty obvious he is definitely interested in the Sooners at this point and from what we are hearing, it sounds like his dad may even be in OU’s corner as well. One to keep your eye on moving forward. – (Alex King) 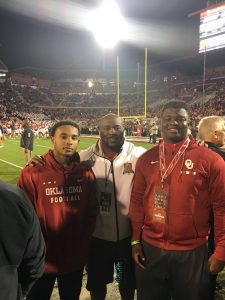