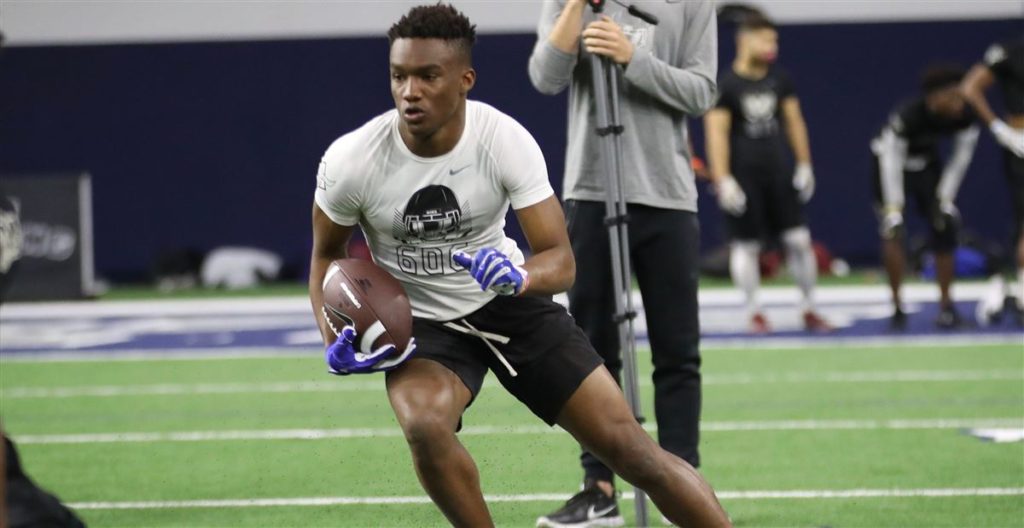 – Weekend visitors: So far, the Sooners have one visitor, that TFB has confirmed, this weekend: Jaqualyn Crawford, the 2018 Rockdale (TX) athlete. Crawford, though listed as athlete, is being recruited as a slot receiver by Oklahoma. Crawford has great explosiveness and change of direction. Crawford is also a guy that, if needed, could play defensive back in college; he is just that versatile and would be a very welcome addition to the Sooners 2018 recruiting class, if he chooses to go that route.

A  visitor that we thought would be making it up to Norman this week was star 2018 receiver Jalen Waddle. Waddle had been talking to the Sooners staff about coming up this weekend to visit OU. With Waddle releasing his top 12 this past week, it was a good chance for OU to continue their surge up his list of potential suitors. Waddle would have had to miss his school 7 on 7 games this weekend to make the trip, so now Waddle and those around him are looking for a different date to make it up to Norman. The visit could still happen in the next week or two, or it could happen in mid-July. After Waddle’s 7 on 7 games this weekend, Waddle plans on sitting down with those around him to figure out the best timing for his visits this summer. TFB will be on top of it and let you all know as we gather the information. – (Brandon)

– Grayson Boomer: The name is perfect in so many ways for Oklahoma – not something you can make up. 2019 Collinsville (OK) tight end Grayson Boomer is very high on OU’s priority list, regardless of class. I spoke with Grayson quite a bit this past week and Boomer told me that he and Sooners insider WR/TE coach, Cale Gundy, speak two or three times a week. Boomer describes his relationship with Gundy as “very close.”

Boomer says that he and his family are arranging visits for this summer and  plan on visiting Notre Dame, Ohio State, Michigan, Arkansas, and Oklahoma for sure. Michigan and Ohio State have yet to offer, but the interest is there from the Buckeyes and Wolverine. Another school from the Big 10 that has shown Boomer quite a bit of attention lately is Penn State. The Nitanny Lion staff dropped by Collinsville this past week to see the star 2019 tight end and from all accounts came away very impressed. Boomer told me that the Penn State staff is another school that stays in constant contact with him, and that they tell him that an offer is very close to happening.

As for OU and Boomer? Things couldn’t be going better. For a period, Boomer wondered if the Sooners would ever offer him, but that changed on April 7th when Boomer face-timed with the whole Sooners offensive staff. You add the fact that close friend, and current Sooners linebacker, Levi Draper is talking to him quite a bit, and you can see why the Sooners feel good about their chances with Boomer. A source tells me, “Boomer is just a different breed. Andrews is an amazing athlete, but Boomer is already well-versed with his hand in the ground, as well as lining up out wide.” The Sooners staff, and in particular Cale Gundy, are expected to see Boomer next week. – (Brandon)

– Daxton Hill: Keeping it on the 2019 OK Preps front, we go to Booker T Washington defensive back Daxton Hill. Hill is the younger brother of rising star, and Oklahoma State running back, Justice Hill. Hill has been on fire as of late, picking up offers from Missouri, TCU, Michigan, and Texas all in the last month. I spoke with Hill last night, and he told TFB that he plans on attending OU football camp next month. Hill said that he has been in contact with Sooners defensive coordinator Mike Stoops and defensive back coach Kerry Cooks.

Hill will be very hard to sway away from Oklahoma State, in my opinion. Hill’s older brother, Justice, will be a junior during Daxton’s freshman year. That said, with Hill visiting OU for the spring game and coming down for their camp, that is always good news for OU; the more a player comes around, the better. Kerry Cooks and Mike Stoops have made it known that Daxton is a priority, and I firmly believe OU will be in it till the end. – (Brandon)

– Jaiden Woodbey: TFB (Brandon) stumbled upon some interesting information this past week while reaching out to various sources. That information is that 2018 DB Bellflower (CA) and Ohio State commit, Jaiden Woodbey, plans on taking an official visit to Oklahoma when the Sooners play TCU on November 11th. The other item of interest is that Woodbey’s official visit to Ohio State is when the Sooners and Buckeyes battle on September 9th. That gives Woodbey two shots to see Oklahoma in person. If Oklahoma impresses in September, that could fuel an interesting recruitment come the inaugural December signing day.

When I spoke with Woodbey last night, you definitely got the feeling that the work Sooners defensive back coach, Kerry Cooks, is putting in with him is paying off. Woodbey says that he is only talking with three staff’s right now: Ohio State, Oklahoma, and TCU. I also spoke to a source that informed me that the Sooners staff plans on stopping by to see Woodbey’s practice next week. This is one that TFB is going to follow very closely, as the relationship that Woodbey and Kerry Cooks have seems pretty organic and in those instances things can happen fairly quickly.- (Brandon)

– Defensive Back Recruiting: The Sooners have 7 commits in the 2018 class. Of those 7 commits, 4 are defensive backs. The work that Kerry Cooks and the defensive staff have done on the defensive back front has been great. The thing is: I don’t think it’s over. I spoke to a source that told TFB that, due to the Mbannasor transfer, there is a possibility that OU could take a DB or two more. The source went on to say that the players OU is really pushing are Jaiden Woodbey, Joshua Proctor, Kalon Gervin, Tre Douglas, and Julius Irvin. I know that the Sooners have been in constant contact with 2018 Owasso DB, and Ohio State commit, Joshua Proctor lately. That door isn’t completely closed. The feeling a lot of people have, nationally, is that OU has a legitimate shot with Cass Tech (Detroit, MI) DB Kalon Gervin, as well. TFB covered that tidbit recently. You add the official visit of Woodbey and the Sooners are in on some really high profile guys in the defensive backfield. When playing in the Big 12, it is criticial to take 4 to 6 defensive backs in every class. The Sooners have their 4 locked up, but if they can land one or two of those listed above, it will be another highly ranked defensive back class for Kerry Cooks and company. – (Brandon)