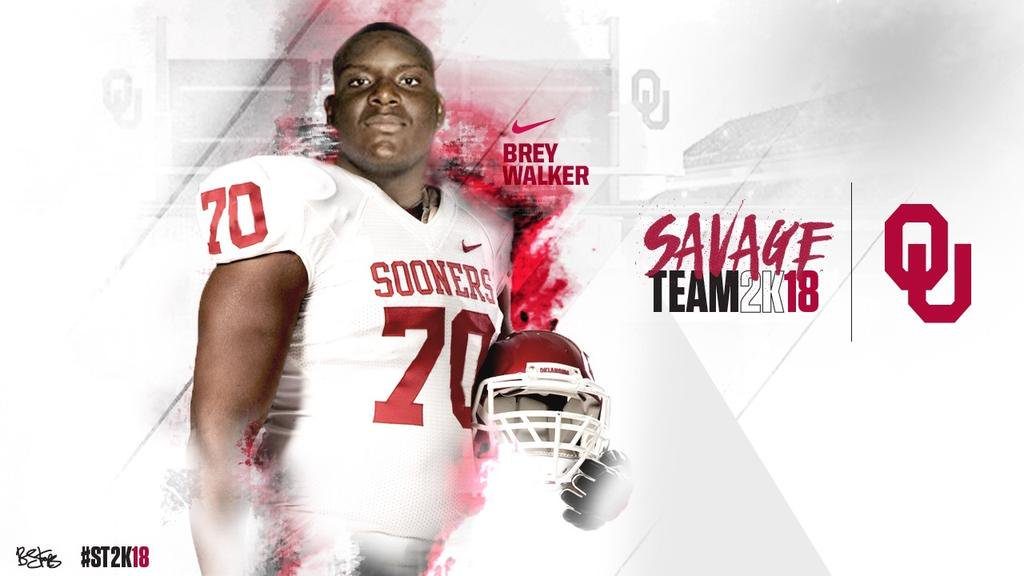 basically, “choppin’ it up” means just shooting the breeze with friends, i.e. conversing and just talking about whatever comes to mind. Chopping it up can refer to analyzing a situation, such as breaking it down and explaining it.

So earlier this week I was able to catch up with the earliest Sooner commitment for ST2K18, none other than Brey Walker. As you know, I love offensive line play, and couldn’t have been more excited when Brey jumped on board early in the process. Brey is one of the smoothest, most athletic offensive tackles to come out of the Sooner state in a long time, and he’s also a prospect that a lot of Sooner fans are excited about. Whenever I have the opportunity to talk to one of these guys, I’m always thankful to them and their families for taking time out of their lives to answer some questions and for simply giving me permission to get to know them a little bit. So first things first: a big Brainiac shout out to Brey and his family.

When I asked Brey if football was his first love, he told me it was actually wrestling. That surprised me; being such a tall guy, I was expecting him to say basketball. He said that once he started playing football, his first position was center. Most kids go into football hoping to run with the ball or be a quarterback, and so I asked him if he was one of those guys.  He said that he always kind of knew that he was going to be a lineman.  He did say that he played a little bit of d-tackle, but he always knew that he’d be somewhere along either the offensive or defensive line.

As we talked for a moment, I asked him what he liked most about the game. He laughed a little bit and said that he likes being part of the team, and basically dominating another person. My next question was, if you had to describe your game in one word, what would it be? “Active.” His answer caught me off guard and stumped me a little bit.  At this point I hadn’t been talking to Brey very long, but as I spoke with him a little I started to understand his answer more and more. Brey struck me as a very levelheaded businesslike guy; he’s also very likeable. So when I reflect on our conversation, I understand that, by him saying “active,” it’s a reflection on the type of worker that he is. Most olinemen want to be knockout guys; by using active as his word, he suggests that he’s gonna be around a while and wearing you out on every play. He said that not everybody will win every rep, so you have to take the mistakes you make and fix ’em.

I asked him what going to the Opening was like. He said it was cool and that everybody’s good, and it was cool that the best in the country were all together in one place. I asked him if anyone stood out to him there that he’d like to see become a Sooner; he mentioned Rain Slater, an OL prospect from Saint Johns, Michigan. Sometimes when guys go to events like this, you hear them talk about people that are popular in the recruiting circles whose names you may already be familiar with. So at this point in the conversation, I could already tell that Brey was different. I say that in a good way; by giving me two unexpected answers, it really made me believe that Brey isn’t someone who goes along with the crowd. He’s a very intelligent guy who makes his mind up on his own about things.

I asked him who he modeled his game after. He said there were two guys…Trent Williams and Tyron Smith. My follow-up was, if he were a GM and had to build a team around one of them, which one would it be: he answered Trent Williams. So then I asked him what about Trent’s game he liked. Brey said that there were different things, but that Trent was truly a pro. He said that Trent does the fundamentals right, but he has his own style too and that it would be cool to learn some of the same.

As we moved on, I asked him, since he was one of the first recruits for ST2k18, if he felt a responsibility to bring others in. He said yes and no… “I’m not a skill player.” I mentioned that being a former o lineman myself, I understood that; us big guys just show up to work and let the pretty boys do all the talking.

I asked him what he hoped to accomplish during his time as a Sooner. Without flinching he said that he wanted to get his degree. He’s going to major in Communications, and I complimented him on being so relaxed and easy to talk to. Brey is definitely down to earth and able to carry a conversation with ease.

To close it up, I told him that the Sooner fan base was really excited about him being a part of this recruiting class, and asked him if there was anything he wanted to tell them?

For me, it was a treat to be able to talk to him for a little while. With his natural skills, the head on his shoulders, and the presence he has, he’s going to be someone who we’ll see around for a long time to come. I really believe we’re getting a great one Sooner fans. Brey Walker is the real deal.