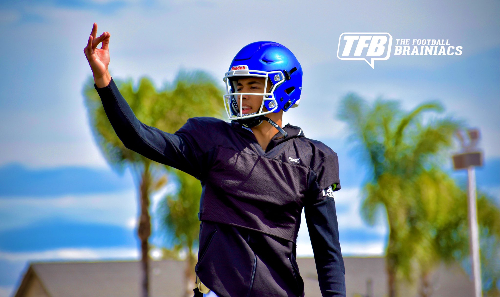 The Sooners picked up yet another massive commitment today as 2023 QB Malachi Nelson (6’3 180) out of Los Alamitos, CA, announced his verbal pledge to Oklahoma. Nelson has been the sole focus at QB for Lincoln Riley throughout the course of the ’22 and ’23 classes and once again, Riley strikes gold in the ‘odd’ years.

Previously Riley and the Sooners have landed the number one overall QB in the 2019 class (Spencer Rattler), the 2021 class (Caleb Williams) and now, in the ’23 class, Malachi Nelson will make his push for that same designation. Whether he gets recognition or not as the number one QB in the class is actually a bit irrelevant as he was obviously Riley’s number one.

Super K has been out front of this recruitment from the jump and we have continually maintained that OU was in a very good spot for Nelson. Back on April 28th. K was the first to report his scheduled announcement date of July 18th and that held true.

Malachi joins running back Treyaun Webb in the ’23 class and his commitment will likely spark a bit of a sense of urgency from some other elite ’23 (and ’22) players to jump on board before their spots are taken.

Nelson chose the Sooners over a ‘Top 7’ which included Notre Dame, LSU, Alabama, USC, Florida State, and Ohio State with USC being their biggest competition.

Sooners head coach Lincoln Riley identified Nelson early on as his primary target as he offered him in January of 2021, which was the tail end of his sophomore year. He was the only offer at quarterback in the ’23 class and it looks like one is all it took for Riley to land his man.

The Nelson family made their way to Norman for the ChampU BBQ in June and by all accounts, that sealed the deal up for them. OU was out front prior to the visit, but once Malachi and the family experienced what Norman had to offer him along with what coach Riley brings to the table, the decision was solidified.

Nelson brings a perfect skill set for Riley’s offense to Norman as he is a tremendous athlete and a gifted passer even at this early stage of his development. He possesses great arm strength and accuracy while also being able to make plays with his feet and agility.

This is a resounding ‘Boom’ for the Sooners and you should expect the shockwaves to trigger some additional ‘Booms’ over time.