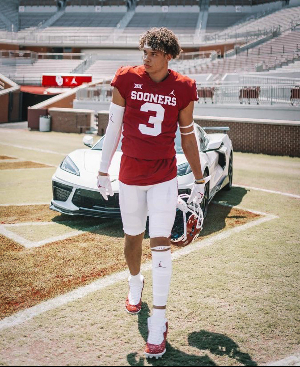 The Sooners added a big time piece to the ’22 class as tight end Kaden Helms (6’5 222) out of Bellevue, NE, has verbally committed to Oklahoma!

Helms chose the Sooners out of a top four which included Miami, Arizona State, and North Carolina.

He was offered shortly after Sooners new tight end coach Joe Jon Finley was hired back in January (January 25th) and he made his way to Norman for the ChampUBBQ.

Kaden was one of five offers sent out by Finley this cycle and he will join Jason Llewellyn (6’5 240) out of Aledo, TX, in Finleys room which needed some replenishing.

Helms will be a versatile option at tight end for OU as he will be able to line up in the slot, in the backfield, and eventually with his hand in the dirt.

Nice work by Finley here as he restocks his room with two of his top targets!