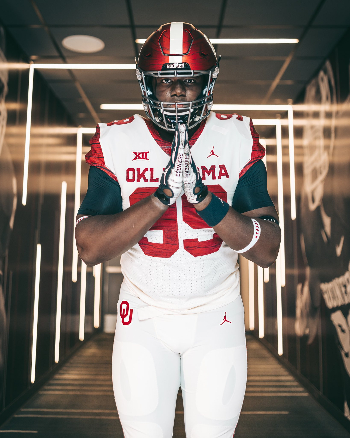 The Sooners land a massive commit in the 2022 class as Gabriel Brownlow-Dindy (6’3 280) out of Lakeland, Florida, has announced his verbal pledge to Oklahoma!

Dindy chose the Sooners over Texas A&M in a head to head recruiting battle in which each team had some advantages.

Dindy’s parents are OU alumni so that tie is obvious, and his father has taken a job in College Station leading a congregation so the connections to A&M are obvious as well as geography favoring them.

Dindy has long been priority number one for the Sooners staff. Oklahoma defensive line coach Calvin Thibodeaux did a fantastic job in this recruitment. Thibodeaux now has Dindy in the fold to go along with Cedric Roberts (6’3 275) out of Plugerville, Texas in the defensive line room. Coach Thibbs is also still in pursuit of in-state DL target Chris McClellan (6’3 295) out of Owasso.

Sooners defensive coordinator Alex Grinch and OLB/DE coach Jamar Cain have also played roles in this recruitment and the pair have assured Dindy he will be put in a position to have the opportunity to rush the passer as he sees himself as a defensive end type.

Dindy is the 15th commit in the ‘ChampU22’ class for Oklahoma and his addition will only help to enhance the attractiveness for other potential targets to join the squad, including McClellan who we have noted as having a ‘good relationship’ with Dindy as the two have been on multiple visits at the same time this cycle.

Dindy’s commit is the first of a pair of priority Sooner targets announcing in October as Gentry Williams plans on announcing his commitment to the school of his choice (more on that later) on the 18th.

Thibodeaux, Riley, and Grinch went in search of the big fish and their efforts were rewarded. This is a massive pull of an elite defensive lineman straight out of SEC territory for the Sooners. The family connections helped for sure, but they did some really impressive work to close the deal.