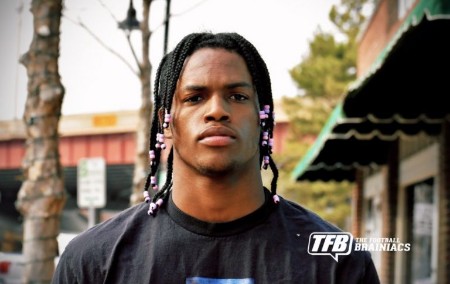 The Sooners picked up their second defensive commit in the #ChampU22 class today as 2022 defensive back Jayden Rowe (6’3″ 210) out of Tulsa, OK (Union) announced his intentions to head to Norman for his college career!

The home state Sooners overcame a previous lead held by Baylor in his recruitment and locked up the incredibly athletic target.

You have all seen the recent videos and times posted both here and on social media platforms as Rowe recently clocked a 10.45 personal best in the 100.

Last week, Super K mentioned that Rowe was trending to OU and then he provided an accurate timeline for Rowe’s commitment to the Sooners.

Rowe is raw when it comes to his play on the field. He has a lot of learning and growing to do in regards to football. But one thing is certain, he has impressive physical attributes which cannot be taught. Alex Grinch and Roy Manning will have a pretty clean slate to work with and Rowe’s physical skill set is something that has the potential to lead to a masterpiece during his career in Norman.

Jayden Rowe becomes the 9th commit in the #ChampU22 class and he joins linebacker Kobie McKenzie and Kip Lewis as the third commit on the defensive side of the ball!

Rowe also is the first of the three Tulsa area recruits that OU is pursuing aggressively to announce his commitment to the school of his choosing. Earlier this spring, Super K went by to see DB Gentry Williams, DL Chris McClellan and Rowe. You have to think getting Rowe onboard only increases OU’s chances with Williams and McClellan.