Hey Gang, sorry it’s taken until this morning to get this done but I tell ya it’s been rough.  Like that dog said when he dragged his behind across some sandpaper…ruff.  Man-Cub was runnin around like a little fire hydrant full of sickness.  I got it early Sunday morning and am just coming out of the woods.  Good news is that now I got a sore throat and runny nose…yay!  Anyway, I’ll spare you all of the gory details and get down to some trenchin’.

I’ve said it a few times that it’s really hard to stop this Sooner counter play.  Flowers’ block is going to catch the linebacker up in the wash, while Dru and Bobby come tearin’ around the corner.  A hat on a hat equals a good play. 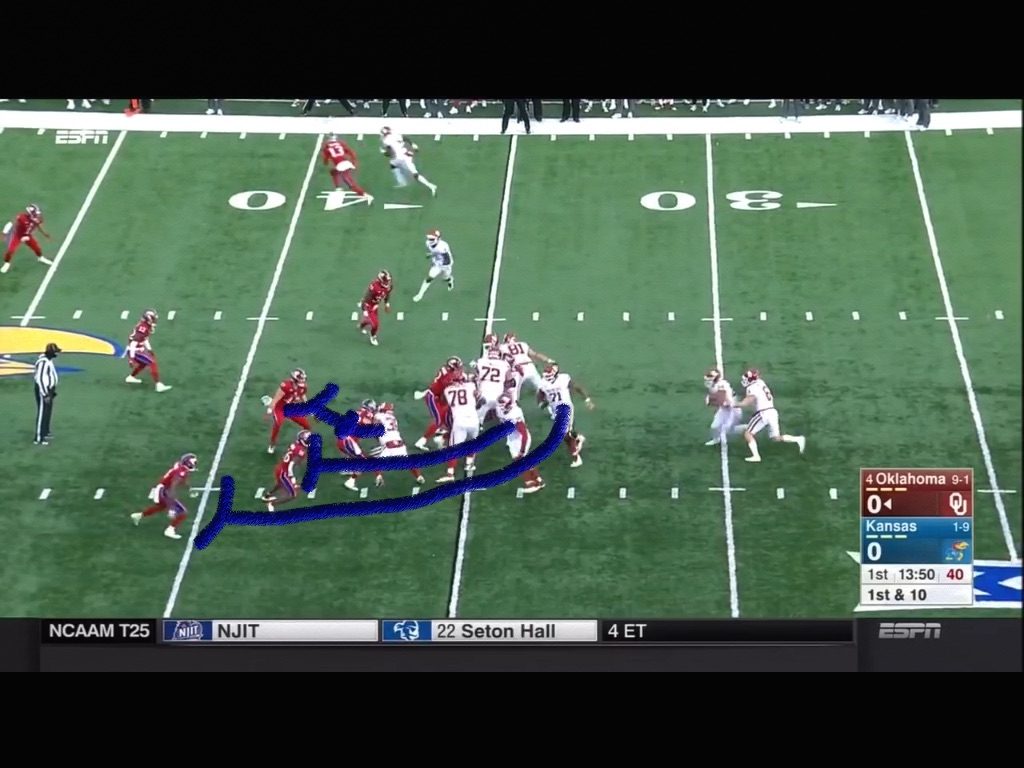 A few plays later, the Sooners go back to the well again and have some good success.  Big Ben is down inside one on one with the all everything Jayhawk DT and does a nice job.  The Sooners again have good numbers and it turns into another nice gain. 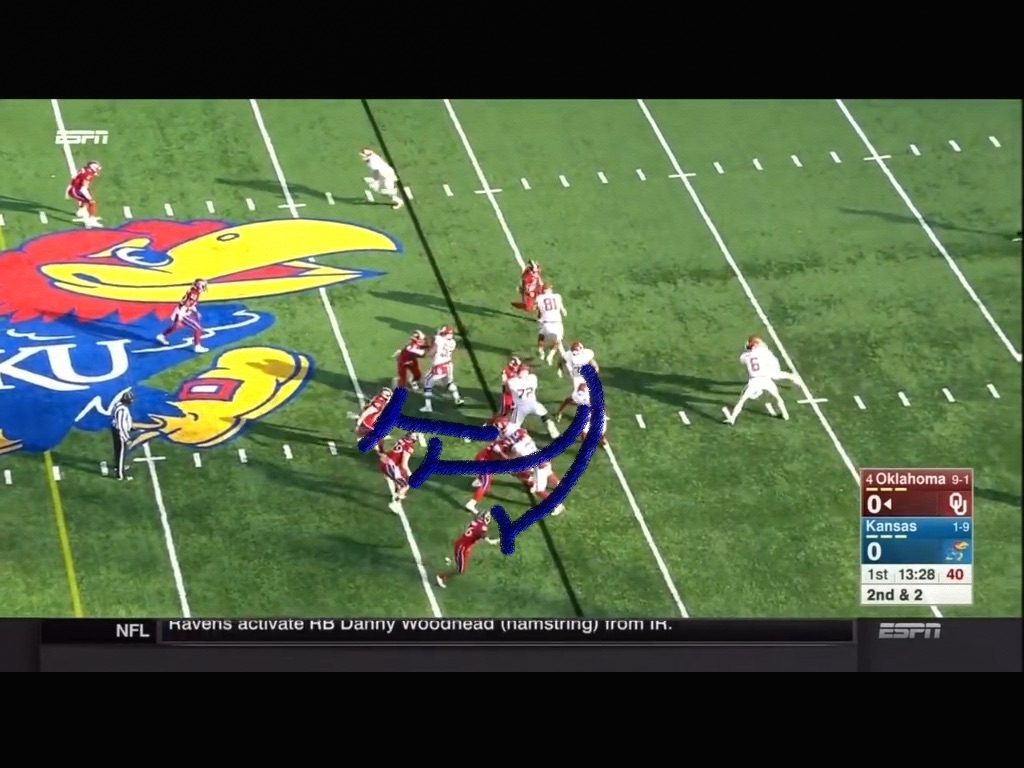 On 4th and 3 Baker made some more magic happen.  KU was giving the outside run game to the Sooners, and saying to Riley that you’re not going to run up the middle, and you’re not going to get a big play deep ball.  With better personnel this plan would’ve been tough to beat.  If Lincoln and Baker have a weakness it’s being impatient.  In spite of all that on this 4th and 3 play, Baker’s ability to keep the play alive was key.  This play was broken and if you see Rodney Anderson, he’s still in blocking mode. 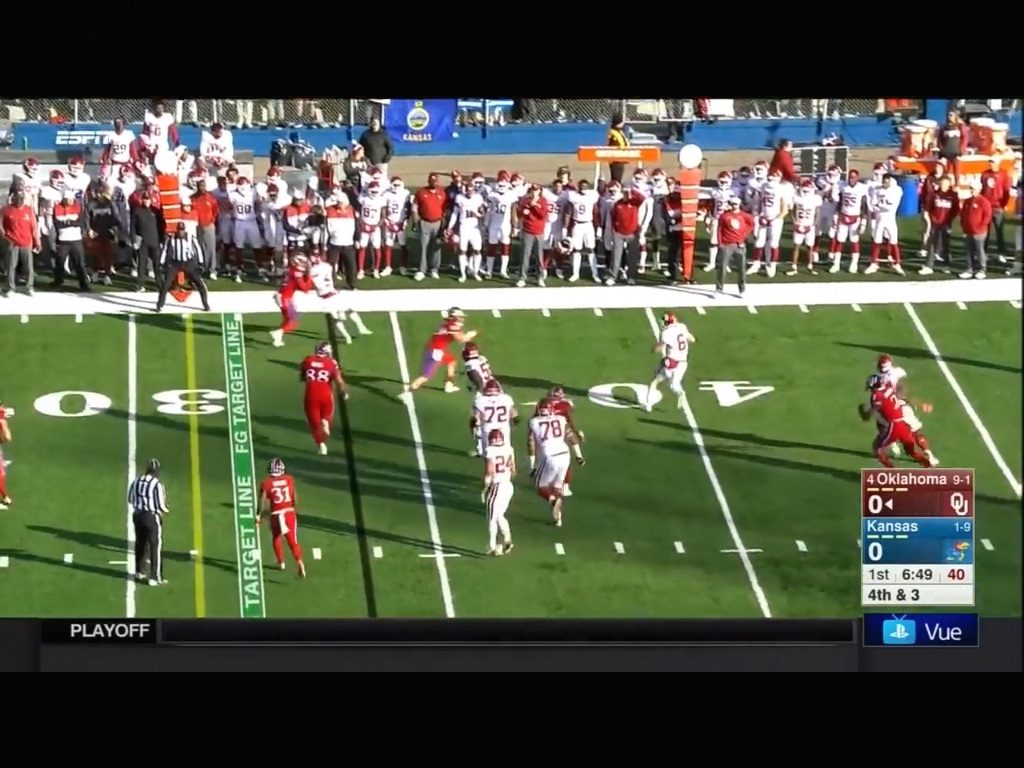 A split second later, Baker Breaks a tackle and Rodney raises his hand.  If there’s a play to be made, Baker’s gonna make it.  Look at the body language of all of the guys on the sideline.  Starters on their feet, and this is “must see tv” for everyone.  Great idea by Rodney Anderson, and I’ve wondered since this play what was going through his mind when he changed it to going out for a pass. 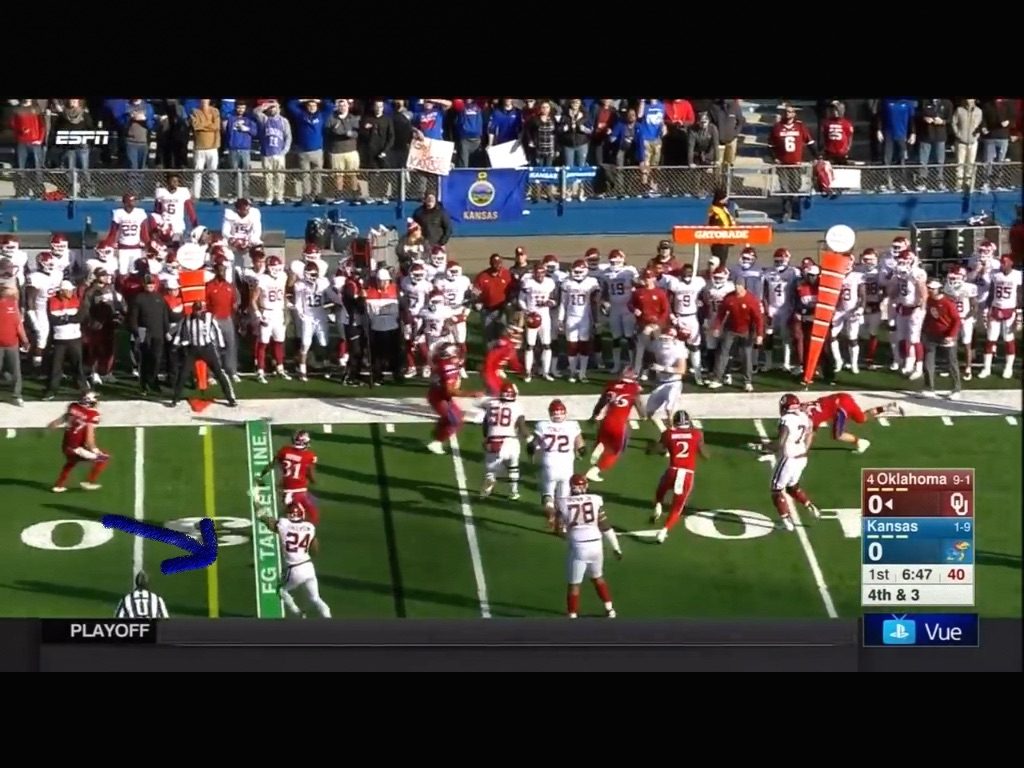 One of the things we always look for when evaluating DL or OL is who’s the 1st guy off the ball.  Big Lampkin is already “gettin’ skinny” turning sideways splitting the double team.  He was the key to this play.  By drawing the guard’s attention, it keeps him from getting up to the lb’s for just a second.  Heck of a play by Du’Vonta. 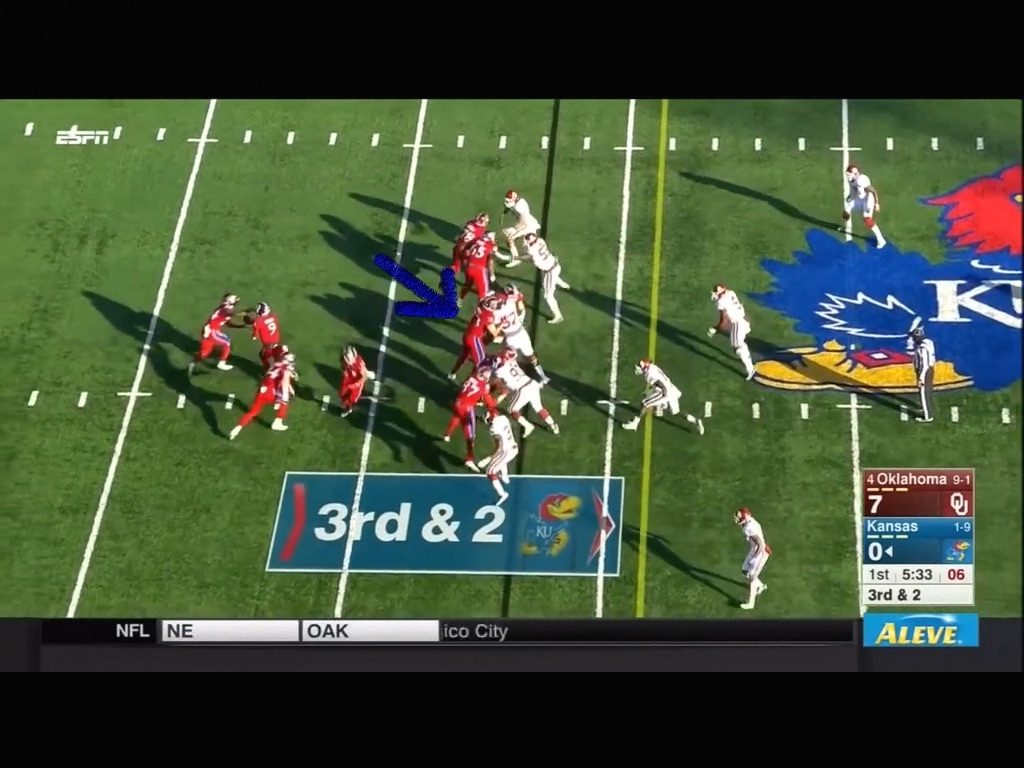 Murray and Lampkin finish the ballcarrier off, and the thing I like about Lampkin is that when he tackles a ballcarrier, they stop going forward.  Derek Green, the new DT commit for 2019, is a Lampkin kind of guy.  As the Sooners go bigger in the interior it will make it easier for them to hold the point inside with less guys and devote more to coverage.  That will be tough to attack.  I really like this look with Gallimore and Lampkin in at the same time. 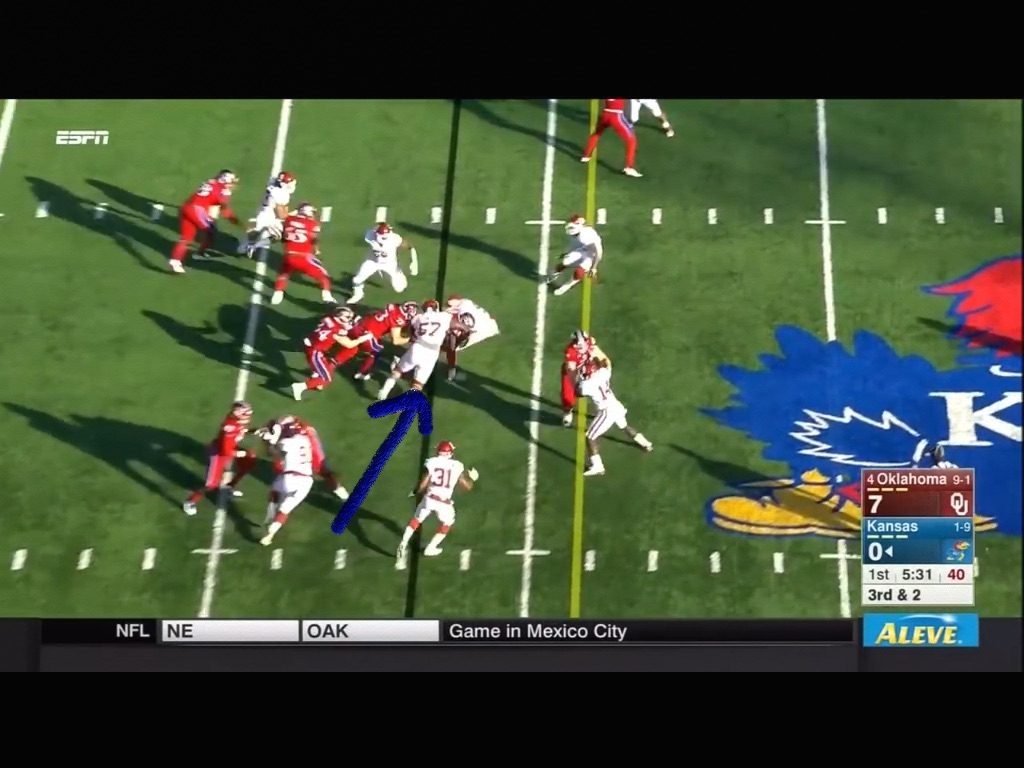 Tre Norwood had another good game.  In slow-mo you can see him swat the ball away at just the right time.  I really like how tight he plays, and just makes plays on the ball. 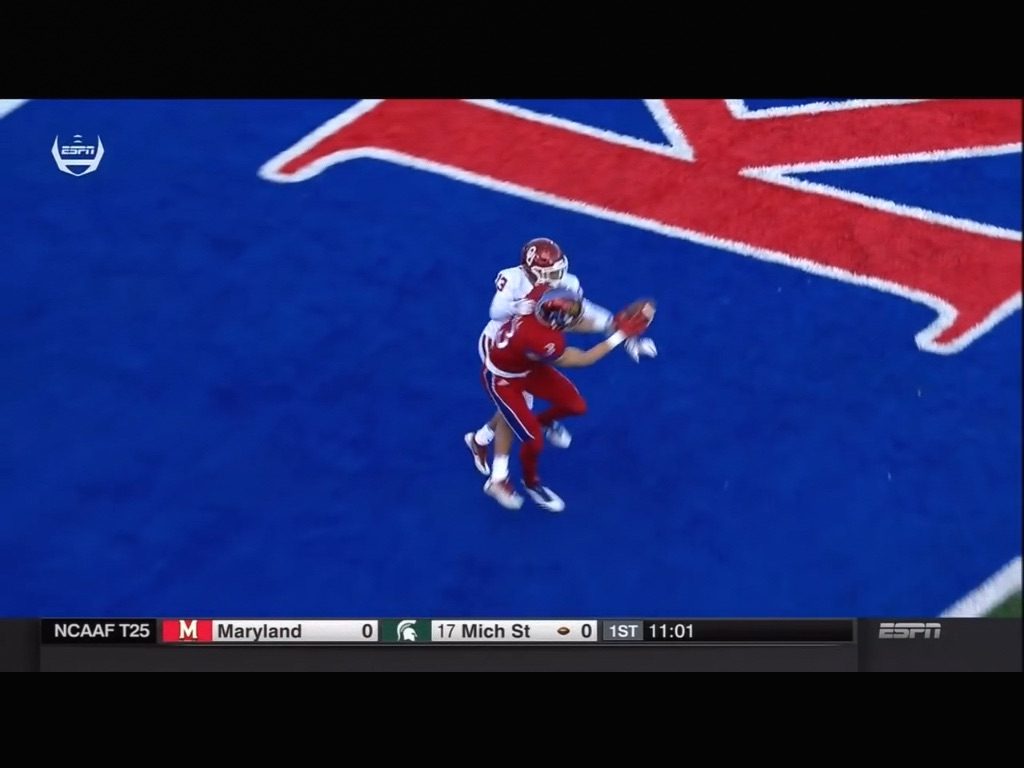 Ryan and I were talking about this during the week.  It feels like Mike can be more aggressive w/Norwood in there because he doesn’t fear the big play as much.  The true test will be against air it out Holgerson’s offense on Saturday.  I like the direction of the defense, but we’ll see the first real aerial assault with new corners when the Mountaineers come calling. 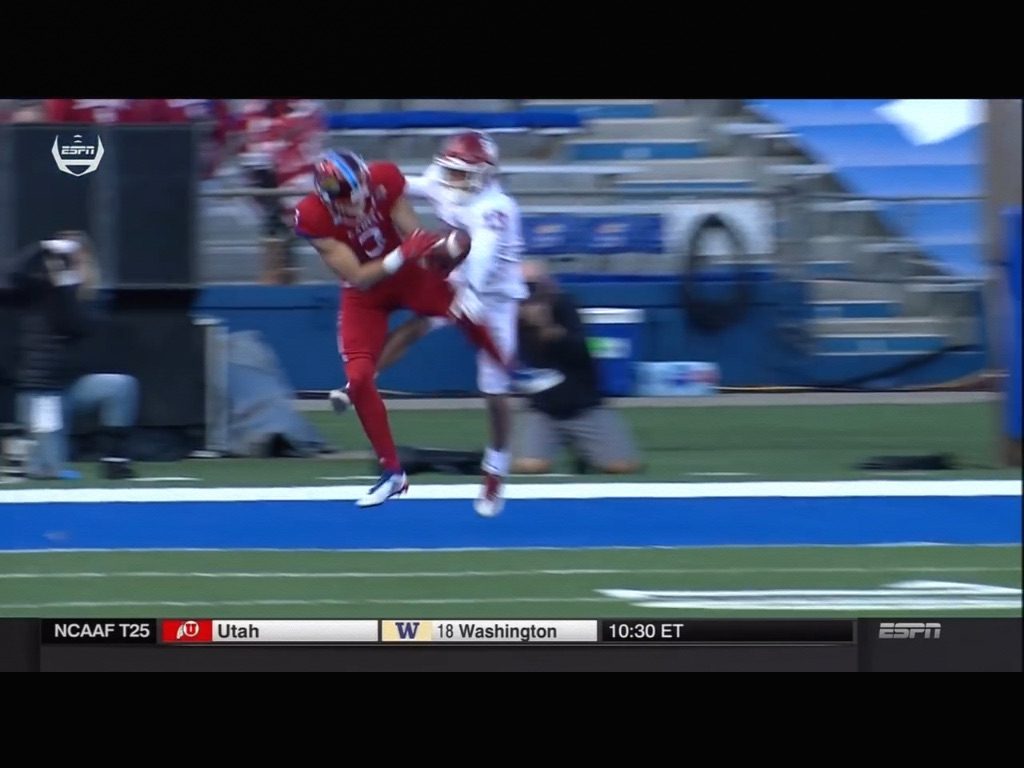 Better coverage equals better pass rush and vice versa.  One feeds the other.  Like I’ve said all year long, you have to cover for a split second to allow your rushers to get home.  This was a coverage sack and one we couldn’t pray for against Oklahoma State. 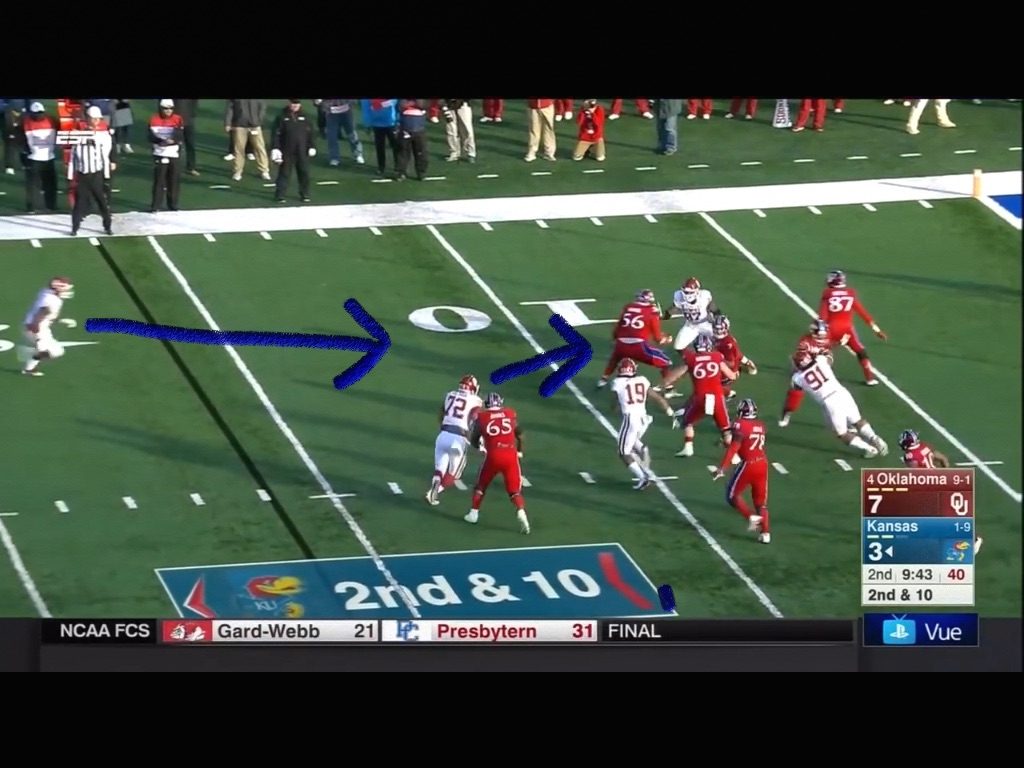 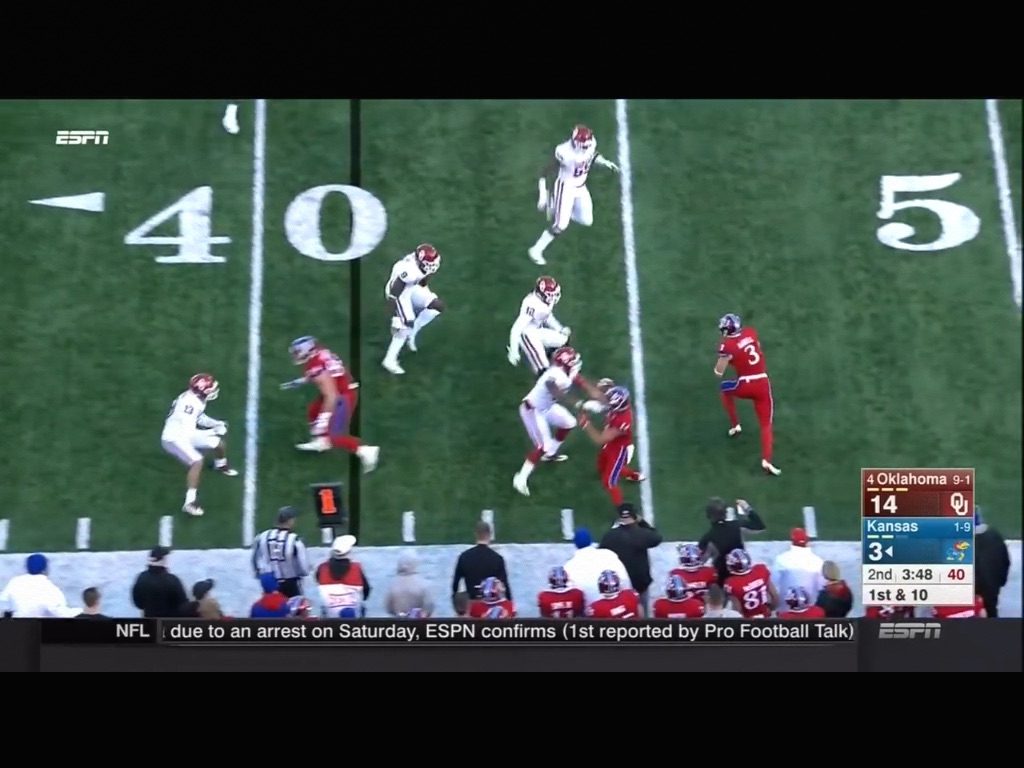 Speaking of effort, one of my favorite receivers is Jordan Smallwood.  The guy is a beast with the ball in his hands.  I’d love to see him get more opportunities.  We saw this goal line play at Ohio State going the other way.  I have to believe Riley ran it again to keep opponents aware of it going into the playoffs.  He may be setting up the give to Anderson off tackle to the left here where he would have walked in.  The linebackers are all flowing to their left and our right, so Rodney would have walked right past em. 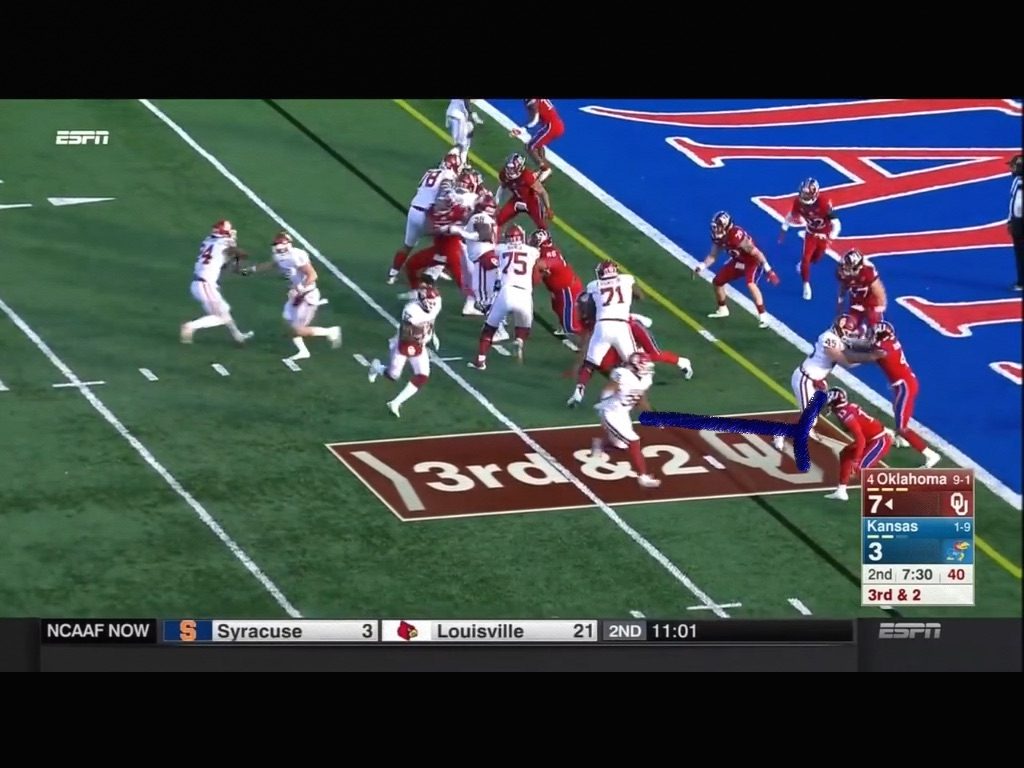 I love Brown’s speed.  Since Riley came to town we’ve seen more of this kind of speed.  Before that Jalen Saunders, and on to DeDe Westbrook.  Brown has otherworldly speed, and that’s what made this play happen.  Since the pass was thrown behind the line it’s legal for the linemen to be engaged downfield. 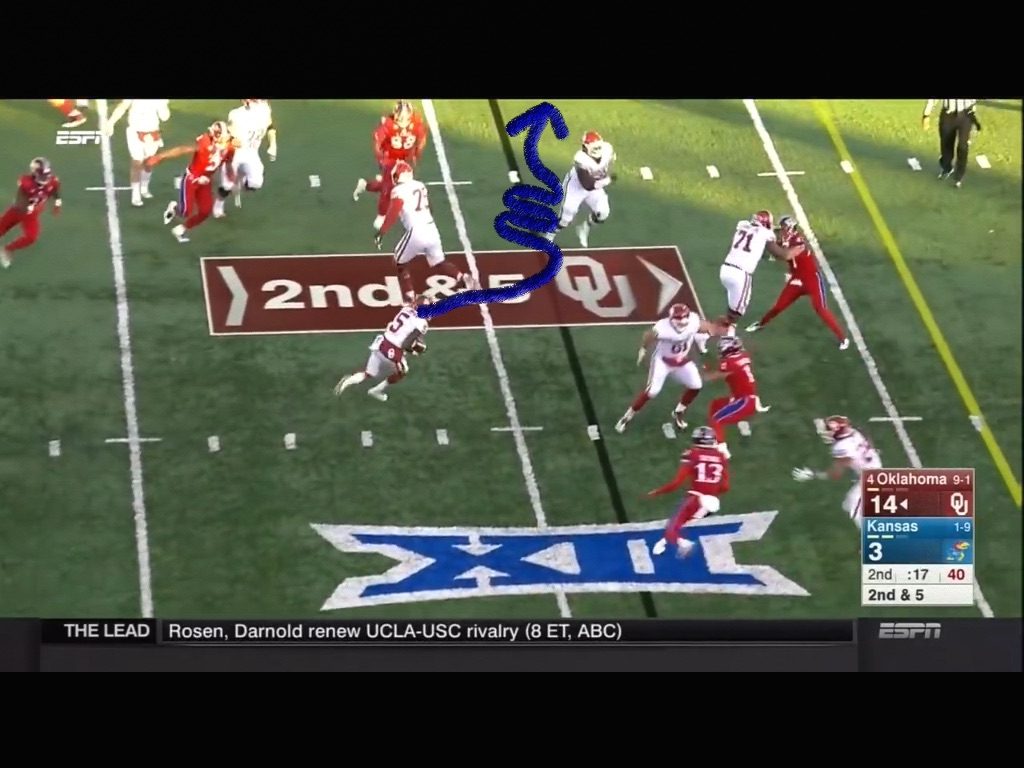 You know you’re fast when your towel’s flapping.  Look at that!  I can’t imagine being able to run so darn fast that the wind you create causes your towel to flap in the breeze.  Unbelievable.  TD good guys.  Wow! 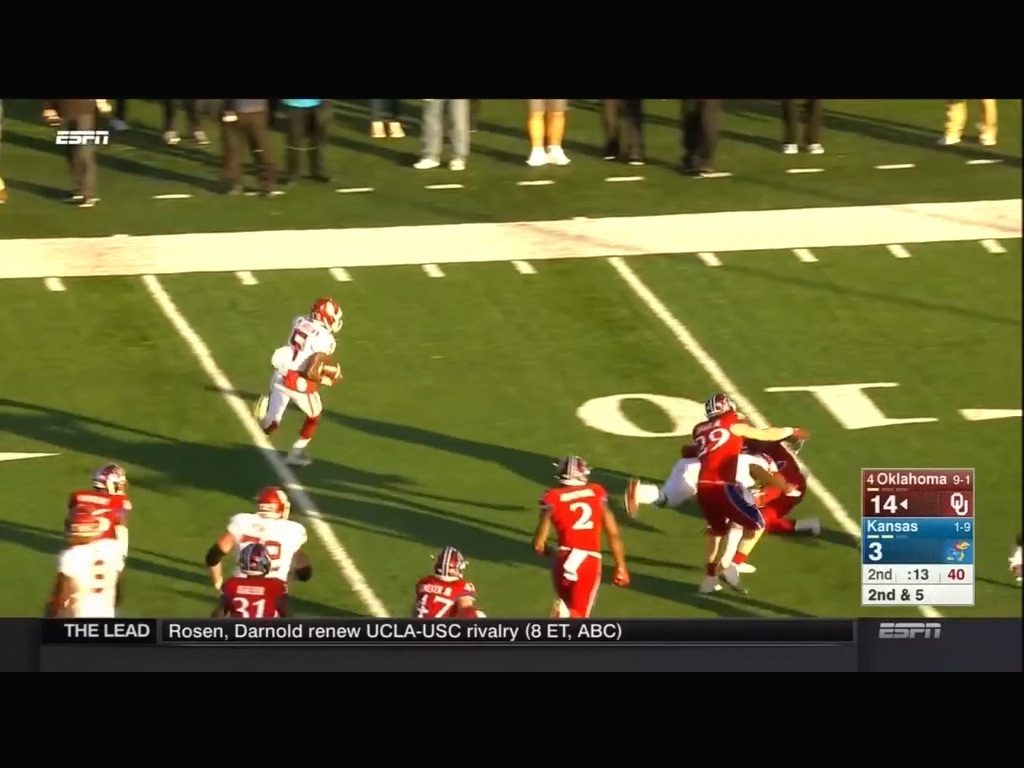 Bledsoe seems to be getting his feel.  I’d like to see Murray read this quicker and fight over the top of the tight end coming down.  He’s gotta blow that guy up and get through there.  Mike’s defense is designed well as it creates a bigger pile by Murray pushing that tight end outside or getting through there while Kelly is closing the door to the outside.  Nice technique by Amani here pressing his guy off to make the play for no gain. 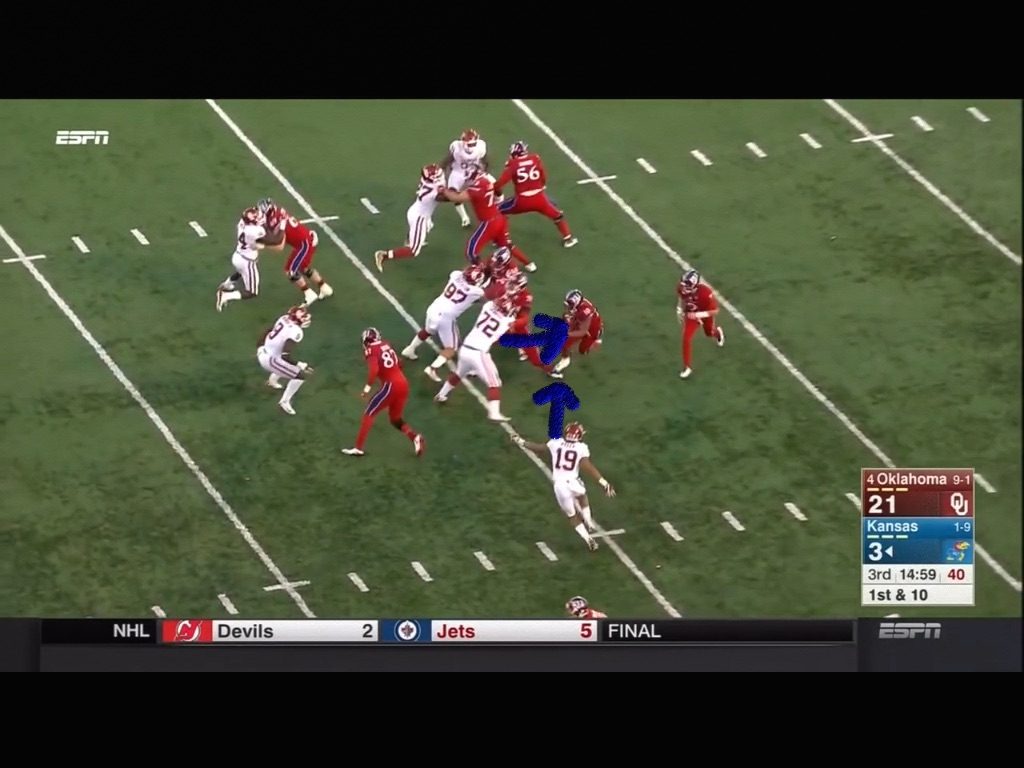 Speaking of play designs, you can’t cheat against this offense.  It’s the same look on the counter run play as it is to the outside swing pass.  The design is identical and everyone does the same thing.  The linebacker, gold line has to stay home to account for the run, and can’t fly outside to blow this up.  Like Baylor’s offense a few years ago, you’re not going to outscheme it, you’re only going to out talent it.  When the Sooners are on, there aren’t many teams who can do that. 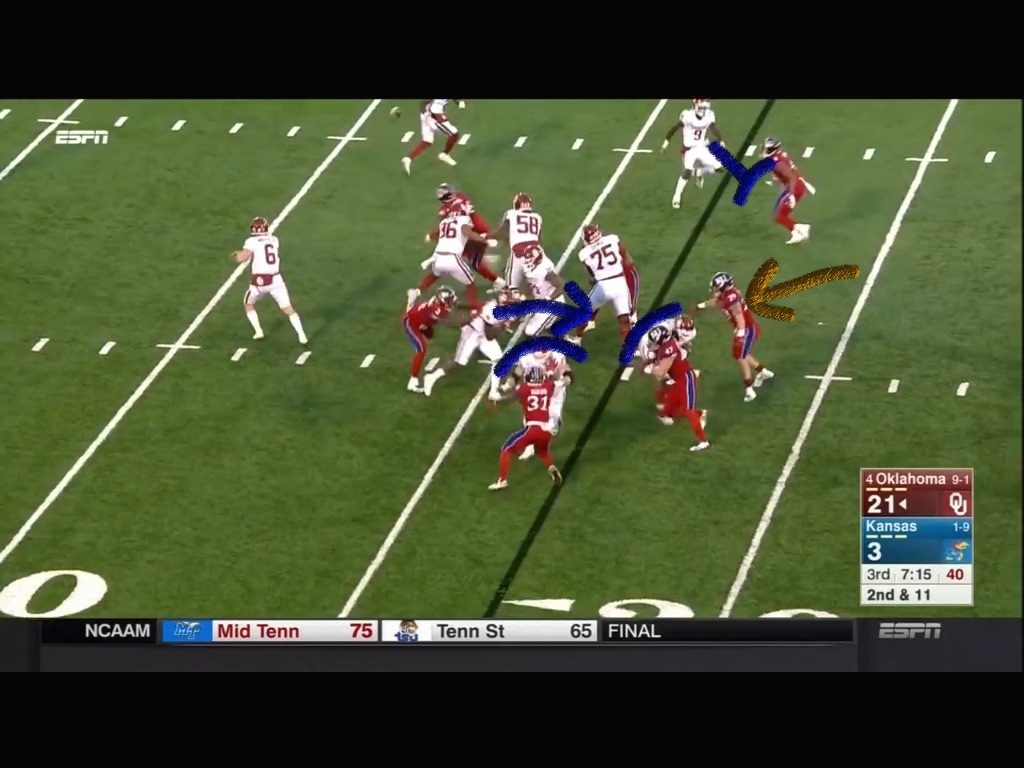 I wonder if we’ll see the first Oklahoma Mackey award winner.  Andrews has had a whale of a year, and he had another big game on Saturday.  I wonder how much more production he would have had if he weren’t dinged up early in the season. 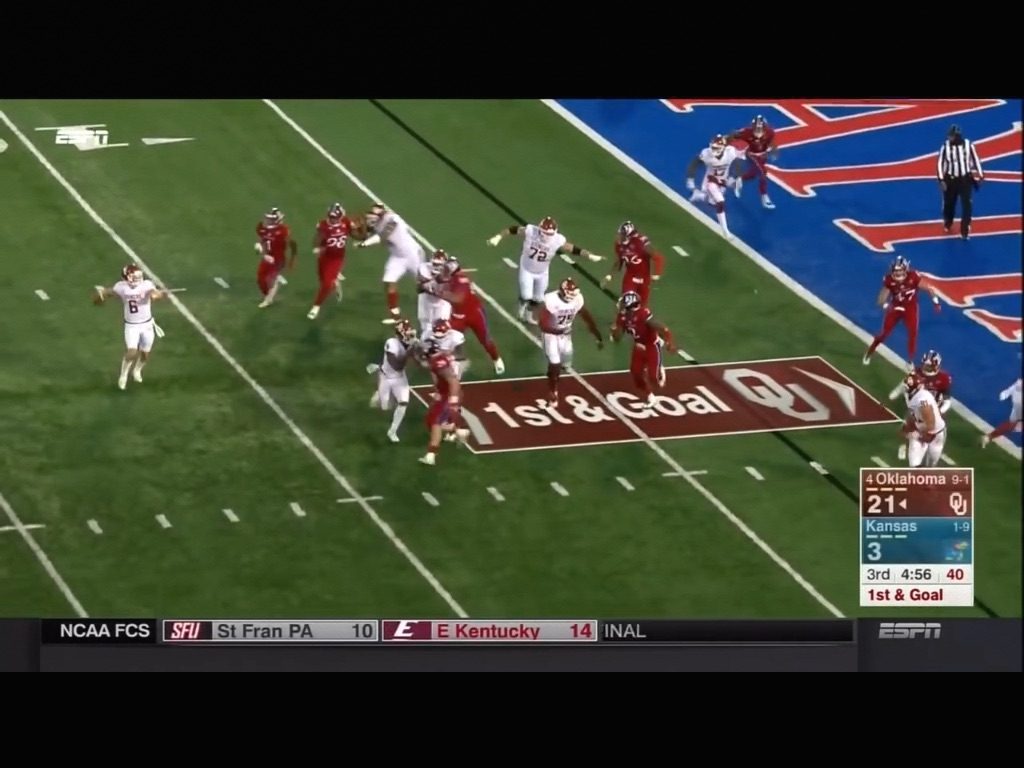 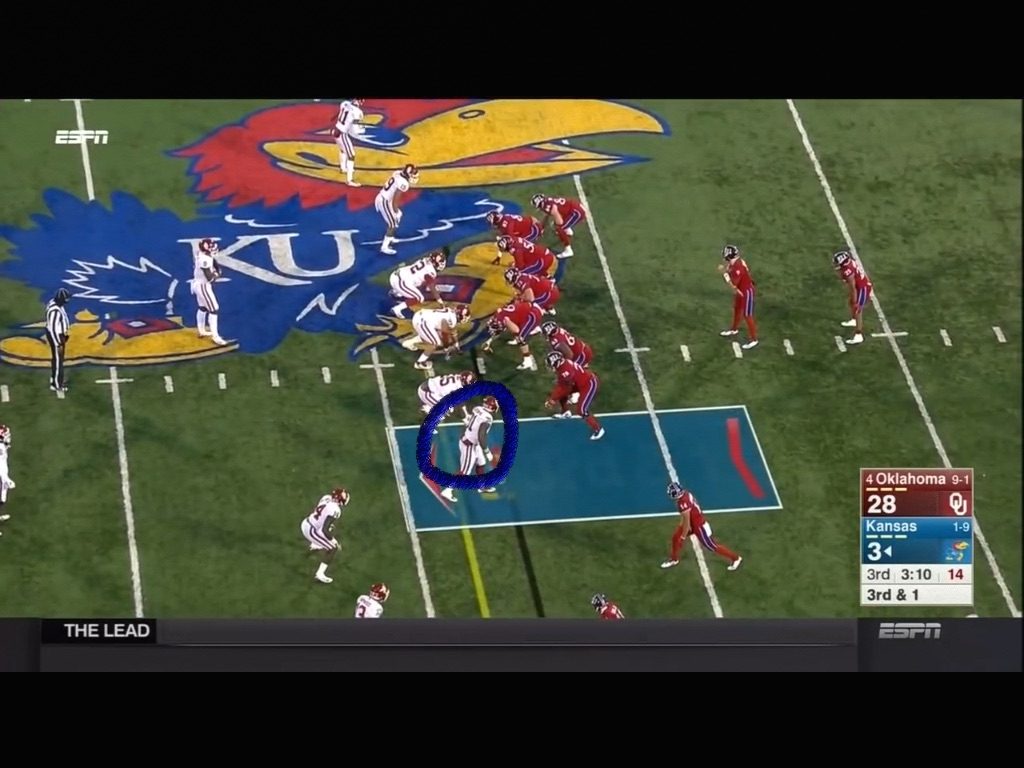 As lethal as he is rushing, man I wish Mike would turn him loose more.  He’s a tackle for loss waiting to happen.  He was on top of the QB so fast.  I think what we’ll see against more conventional offenses that you’ll see in the playoffs is more Obo around the line.  Unless some coaches see it and try to scheme to eliminate it, he may have a huge playoff run. 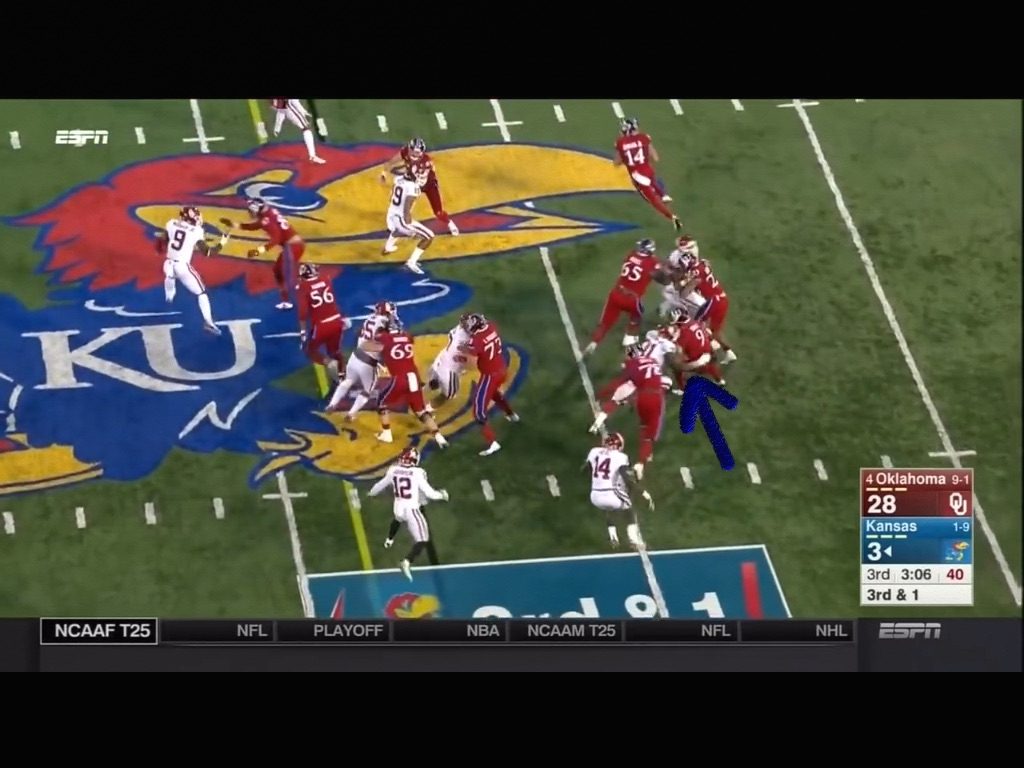 Obo Alert!  So let me get this straight Mr. KU offensive coordinator?  Your left tackle, who should be one of the best blockers on the team just got embarrassed by Mr. Okoronkwo.  Now you’re asking a wide receiver to block em?  Sounds like a wink wink, sound strategy… 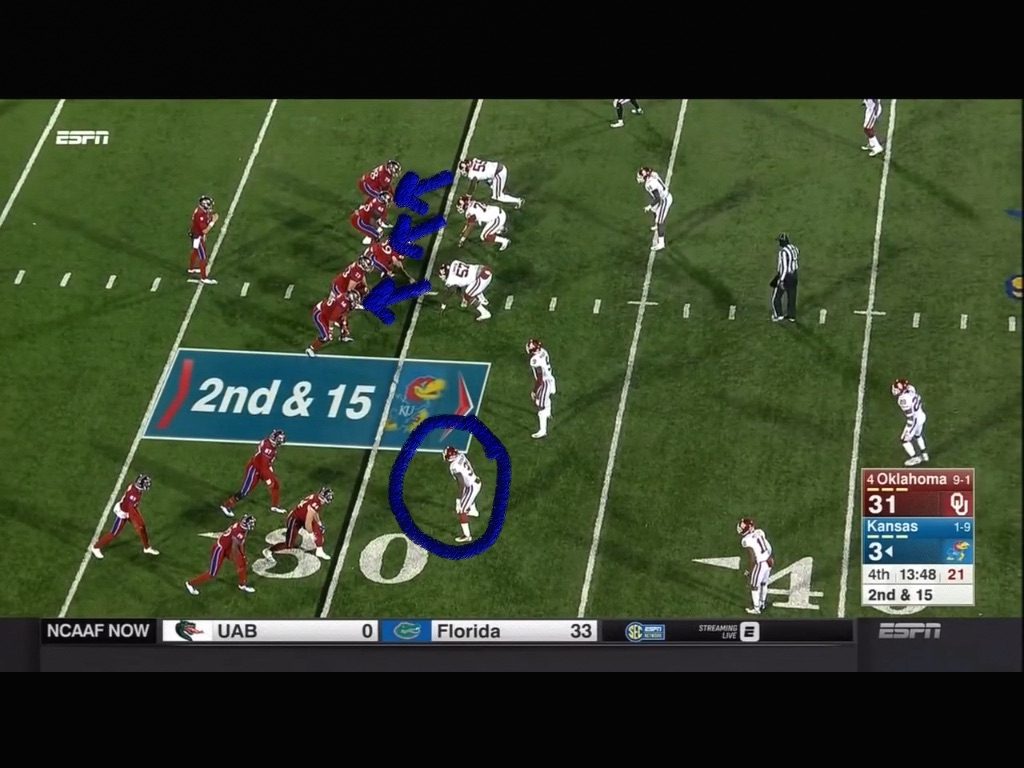 How’d that work out for ya?  Mike, all I want for Christmas is to let Obo stay up to the line of scrimmage.  Go 4-2-5 and let Obo be around the ball more. 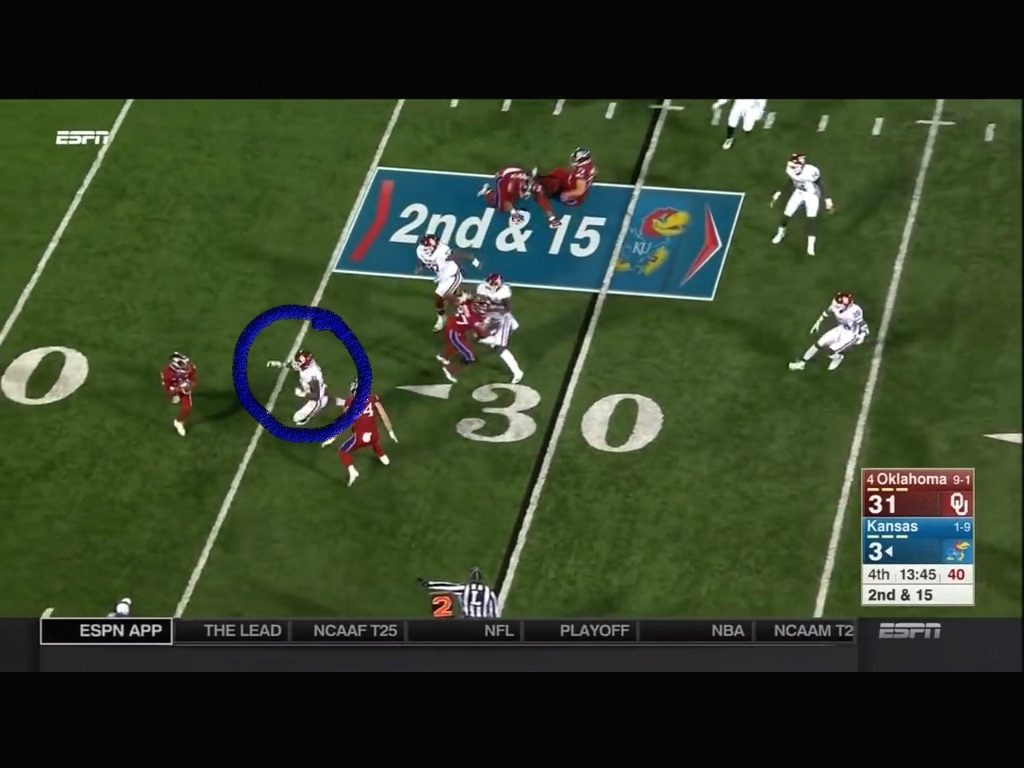 Preach!  After Rodney got a bit dinged up, Trey came into the game.  I still haven’t seen anyone stop this counter play consistently.  Riley wen’t read option look off of it to keep the backside players at home, and look at big ol’ Bobby Evans lookin pretty pullin around.  My OL coach always said, you gotta look good doing this so you can get your picture in the paper.  We used to counter people to death.  After a few times of getting a run at that d-end or filling up in the hole on the LB’s, you can flat wear em out. 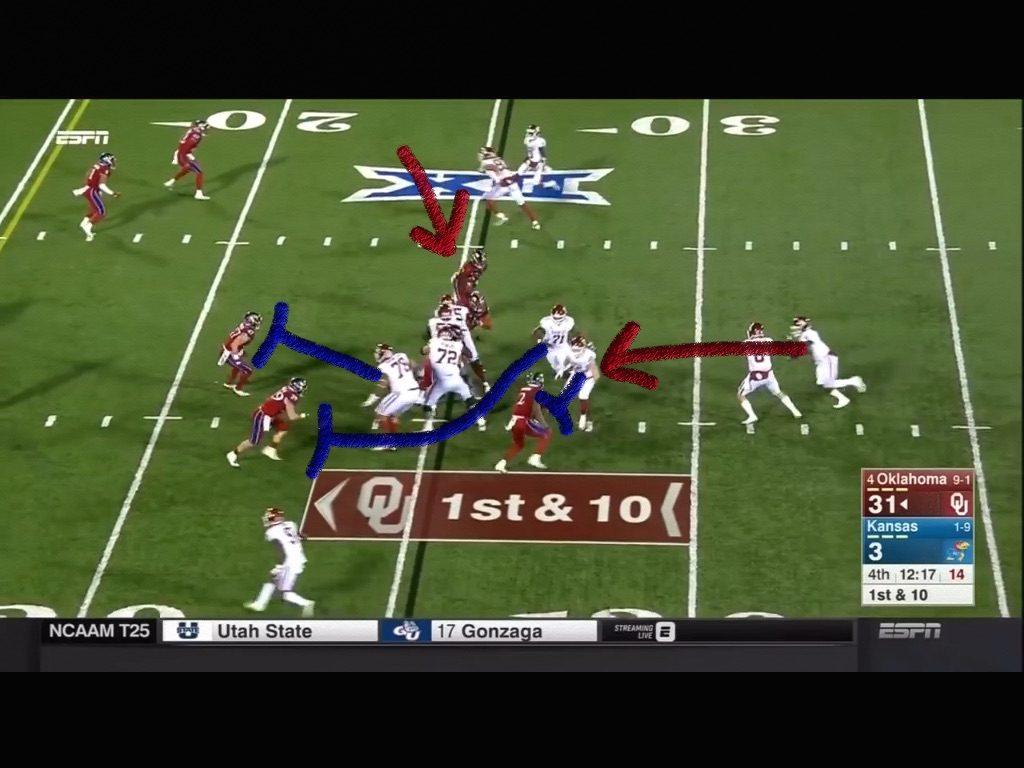 Well, Bobby got his picture in the paper, and so did the guy he’s blocking.  That’s when you go over to the sideline of the other team and tell em, you gotta get somebody else in there coach!  I wonder what’s going through the mind of the DB that Orlando Brown has missile lock on?  Nice run by Sermon to finish em off. 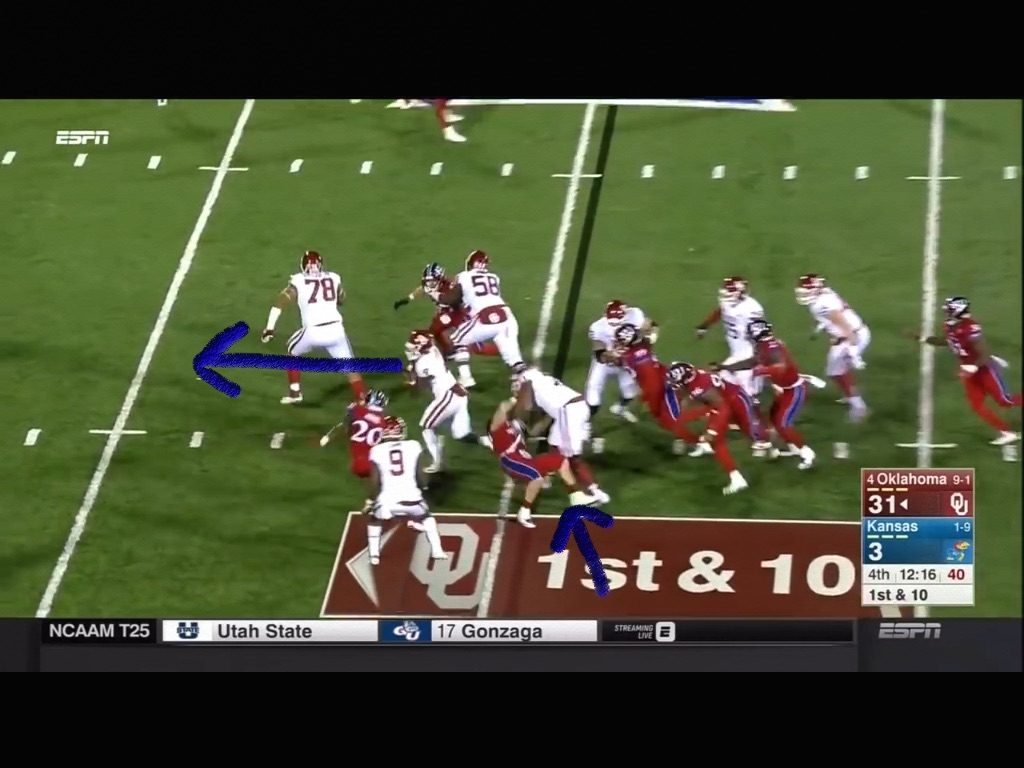 Tre Brown!  I can’t wait to watch this guy play more.  I love his ball skills.  Even as he bats the ball, look at his eyes going up to see if he can pick it off.  I’ve been able to DM with his old little league coach a bit, and from what I hear Tre is an ALPHA DOG to the nth degree.  Love that mentality and can’t wait to see him play more. 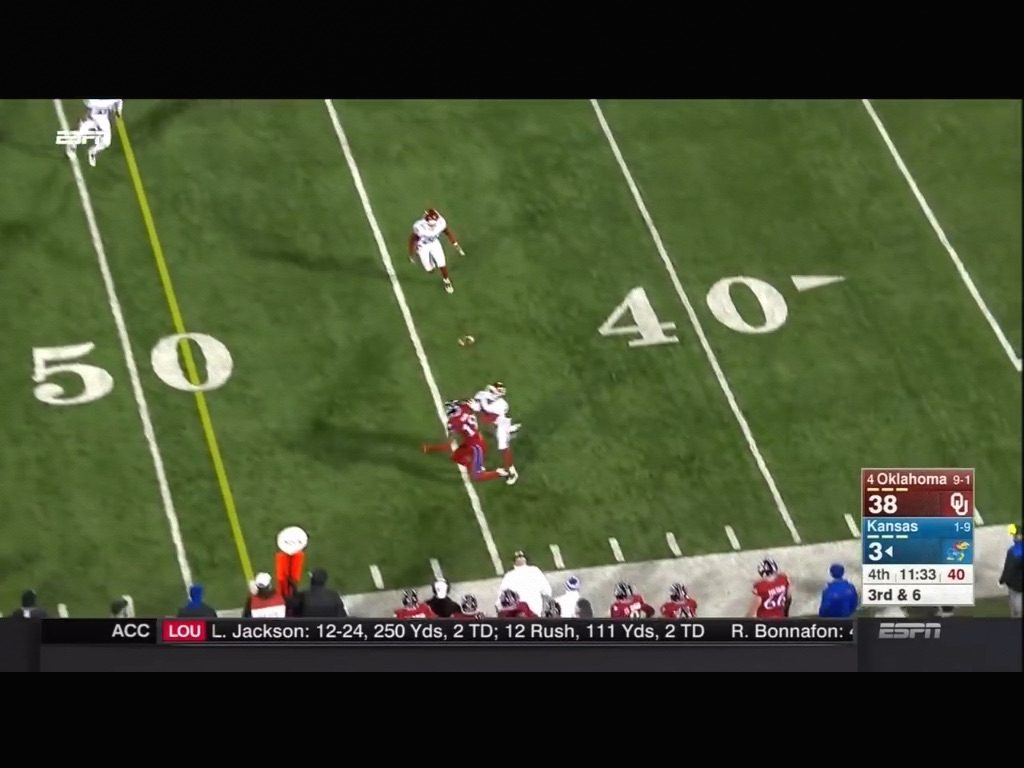 We’ve heard that the reserves are getting more reps in practice on thursdays to run the Oklahoma O and D.  That way they get more comfortable and don’t look lost like we’ve seen Sooner reserves in the past.  Here Mark Jackson causes a fumble on a short yardage play.  I’d like to see Gumbs not get driven back like that and Terry has to do a better job not getting cut, but he got up and recovered the ball! 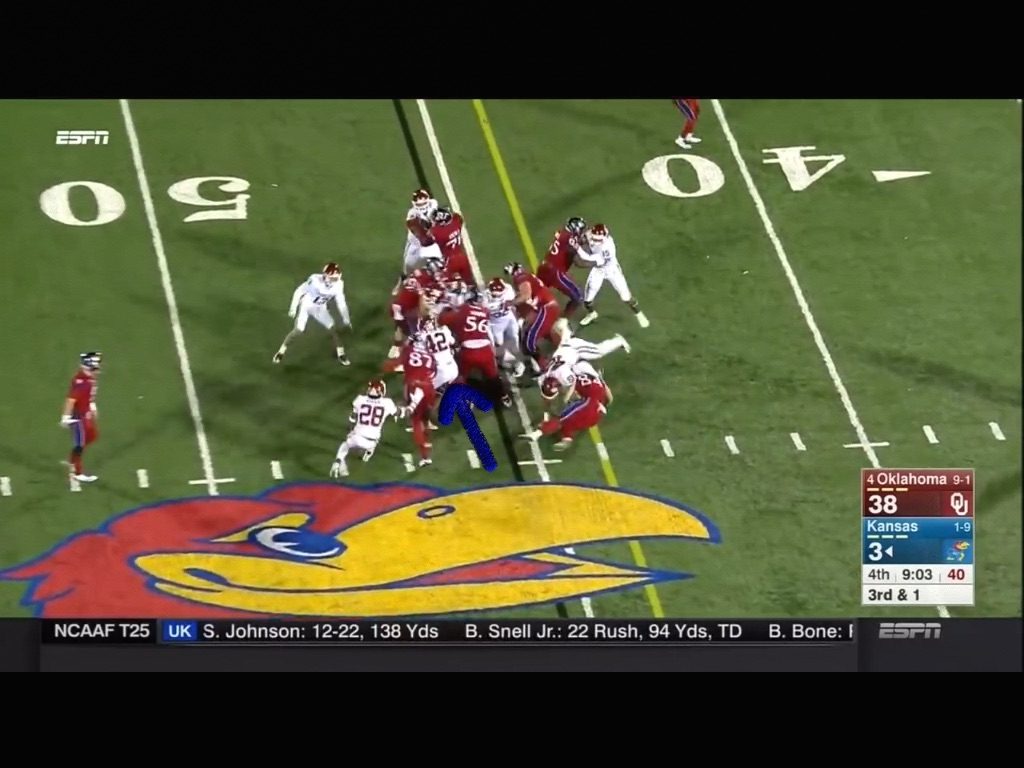 Happy Thanksgiving!  Thankful for all of you guys and gals who are our readers.  Without you there is no me!