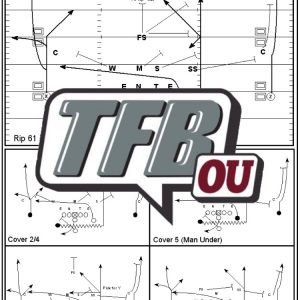 In an effort to provide our readers with as much insight into what Alex Grinch will bring to the table as the Sooners new Defensive Coordinator, we have brought in Cody Alexander to provide us with a multi-part in-depth series of notebooks. This is part three of the series.

Cody Alexander is currently the Secondary Coach at Midlothian HS (5A DII – TX) and author of MatchQuarters.com. He has written two books on defending modern offenses, Cautious Aggression: Defending Modern Football (2017) and Hybrids: The Making of a Modern Defense (2018).

Coach Alexander was the Defensive Graduate Assistant at Baylor University under former Arizona St. and Baylor Defensive Coordinator, Phil Bennett. During Coach’s tenure at Baylor, he assisted with the development of the corners and was placed in charge of opponent breakdowns.

In the first two articles, we discussed what newly hired Defensive Coordinator Alex Grinch will bring to the table and how he uses the front to set up his defense. In this third installment, we will take a look at run fits and how Grinch uses the linebackers to counter the offense he goes up against. It is important to remember; a great defense will use each level as a link in the chain. Fitting off each other to suffocate an offense’s running game.

Most offenses in the Big 12 function out of an 11 personnel grouping. This means there is one RB on the field with a TE. That leaves room for three WRs. The TE is crucial in the modern offense and can function as an in-line blocker (Carson Meier), flexed out as a WR (Calcaterra), or an H-back that aligns as a slot (off the line but outside the Tackle) or as a FB (inside the tackle box). This article will focus on this multiple personnel grouping because this is where most offenses in the Big 12 fit. Outside of Texas Tech, who’s coach is no longer there, no team really bases from a 10 pers. four WR look. Most in the league are turnng towards a Y-off approach to the Spread (below).

Grinch’s previous experience in the PAC 12 will serve him well as he transitions back into a Spread-centric league. Dealing with Y-off formations is nothing new, even in the Big 10. That being said, neither league is as offensively oriented as the Big 12. Every DC goes through a transition period, Grinch’s hopefully won’t take that long.

Grinch essentially has two true LBs. The Mike and the Will. Both live their lives in the box. The only time they are out of the fit is against 3×1 formations. Grinch chooses to use the boundary safety as the adjuster and will sink him into a gap. By doing this, Grinch has released the conflict of the ILB to the #3 WR. The Nickleback and the boundary safety are similar in nature. Neither is truly a LB, but both are asked to live near the box. The Nickel is technically your third ‘backer and is the force player/edge setter to the passing strength.

Below, Grinch’s defense is shown defending an 11 pers. 3×1 formation. The Mike is able to creep closer to his responsibility in the TE, while the Will moves over into the middle of the box. The boundary safety functions as the “capper,” or plus-one, and holds the “B” gap if the Mike gets walled inside. All this looks complicated, but if you look at the picture you can tell who the LBs are keying, the backfield. This keeps reads simple and fast, especially when your D-line is holding their gaps.

Grinch attempts to shift his coverage men in order to eliminate RPOs. By doing this, the boundary safety technically becomes a “box” LB. In the image, above, the boundary safety will sink into the box at the snap of the ball. This allows the Mike to be free and relate to the TE (the #3 WR). Versus 10 pers. Trips, the Mike now has no responsibility other than relating to #3. This opinion on eliminating RPOs is probably the most popular and is mirrored in Venable and Saban’s schemes. The modern defense must have ILBs that can play in space and fit the box. Below is a look at the overall fit.

Most offenses in the Big 12 are Zone base, meaning they do not rely heavily on pulling lineman. This is where Lincoln Riley has been able to set himself apart by meshing Power schemes with an Air Raid passing game. Texas, Baylor, and Oklahoma St. use multiple TE looks to try and gain numbers for their Power schemes, but most of the league is going to rely on Zone as their base run play.

Below is an example of Grinch defending a simple Split Zone (Zone blocking one way and the TE sealing the opposite). This will be the typical look versus a two-back set. The Ni is working from an apex alignment and will trigger on a run read. Quarters is the coverage behind the front. The triggering Ni gives the QB a throw read. Sticking with the secondary, the back-side safety, as illustrated prior, sinks into the box as the “capper” and will redirect to where ever the ball goes.

The box fits are made simple. Grinch has the DE to the bottom ripping into the “B” gap. This frees the Will LB to snap to the outside anticipating the RB bouncing if the ball is handed off. The Mike is clearly watching the RB and works to the open gap. Had the ball been handed off, the RB would have been met by the Mike and the Nose in the gap. Grinch’s defense is aggressive to stop the run and forces the QB to make quick decisions. To stop RPOs like the one shown, Grinch can manipulate the coverage over the slot, but that is the fourth part of this installment.

Grinch likes to move his line pre- and post-snap, even using secondary players to fit where the offense might not think someone is coming. Below is an example of both. Grinch uses a full line movement away to the two-WR side. Like the Split Zone illustrated earlier, the movement by the DE at the bottom allows the Will to snap outside. The CB to the boundary also adds into the mix. The movement wastes the puller and the RB is easily captured before he can gain any yards. The Ni, Mike, and Will were all near the box and triggered on the run. The only difference from the prior clip is the boundary secondary play. Instead of sinking in the safety, Grinch chose to insert the boundary CB. The results were still the same. To the top, the coverage was a 2-Read scheme to combat the Bubble by the slot, showing that Grinch doesn’t use umbrella schemes, yet can adjust them week to week for what he is seeing.

The Arc Read is becoming an increasingly popular play in the NFL, but it is a staple in most Y-off playbooks because it pairs well with Zone and Split Zone. The clip below illustrates the front side read, where the TE bypasses the DE to wall the ILB, in this case, the Mike. Grinch attacks the play with a simple Ni edge pressure. The D-line gets caught in a stem, but quickly adjust post-snap. The DE to the TE’s side works off the Tackles butt for the Dive, while the Ni blitzes for the QB. The edge pressure forces a “give” read to the RB and the play is dead. One thing to note is the DE to the bottom of the clip. Since the stunt is coming to him, and so is the zone blocking by the O-line, he is afforded the ability to wrap back into the box. This is a clever way of gaining numbers in the box.

The sister play to the Arc Read, and the one that is most often married to Split Zone is what I refer to as Slice. The TE, instead of sealing the edge, arcs to the ILB. This play has been used a ton recently in the NFL with teams like Seattle, Dallas, and others using it to help their dual-threat QBs. The clip below is a great example of how Grinch’s run defense functions. Quick penetrating D-linemen created either by movement or the explosiveness provided from single-gap fits. All three LBs are keying the RB, and the two ILBs have the freedom to be aggressive. The added value of a sinking safety to the single-WR side gives the offense a plus-one that they can’t deal with. The result is a tackle for a loss.

This is just a small sampling of how Grinch’s overall defensive scheme fits the run, but one thing is clear, it is aggressive and multiple. Grinch uses different secondary manipulations along with aggressive D-line play to help get free hitters on the ball. This is crucial when stopping the high-powered offense seen in the Big 12. By keeping things simple up front in using single-gap fits, the LBs are left to simply react to what they see. Though the scheme can get into trouble at times, it puts the pressure on the QB to make precise throws or reads under duress. Grinch takes the game away from the OC and into the QB. Combining different looks whether it be stemming D-line men, blitzing LBs, or rotating men in the secondary, Grinch is trying to force the offense into situations that favor the defense, what I refer to as a plus-one mentality.